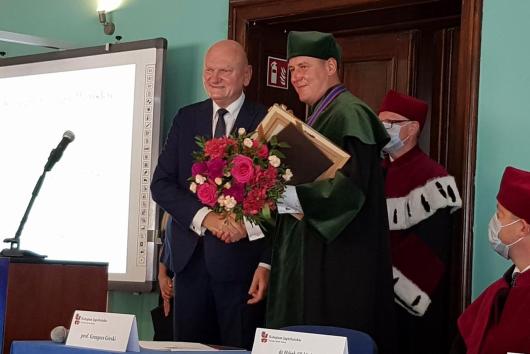 Czech Minister of Foreign Affairs Tomáš Petříček was awarded with Poland’s Jagiellonian Prize for his efforts to strengthen the role of Central and Eastern Europe in the world, the Czernin Palace reported on Saturday.

Petříček is only the second Czech holder of this award after it was won by former Czech President Václav Klaus in 2017.

The prize is awarded annually by the Jagiellonian College, a private university in Torun, Poland. In addition to Petříček, who personally accepted the award on Saturday, this year the school also awarded Lithuanian Interior Minister Rita Tamašunienė, but she did not arrive in Poland due to the coronavirus epidemic.

“It is a great honor for me to receive such an award. The current difficult global situation in connection with the pandemic is a great test of mutual relations, not only with our neighbors,” said Petříček in his speech. “However, it was the friendly and mutually functioning neighborhood that proved to be the most effective in the first phase of the fight against the invisible enemy COVID-19.”

In his speech, he also recalled the common history and the centenary of the Miracle on the Vistula.

“Under the rule of the Jagiellonian dynasty, we, together with one part of today’s Poland, constituted one state. It was integration in peace after years of mutual conflict. Together we confronted the threats posed by the Turks and those times united us then, just as we are now united by the fact that we face other common challenges,” said the Czech foreign minister.

“Exactly 100 years ago a battle took place between the Polish army and the Russian Bolsheviks. We also know it as the Vistula Miracle. It helped keep communism out of our country until the tragic advent of World War II. This battle made life easier for the Czechoslovaks in the then First Republic,” Petříček pointed out.