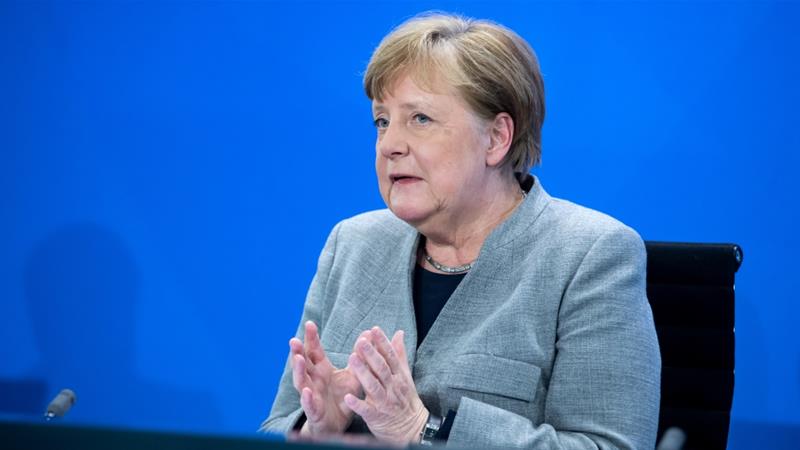 German Chancellor Angela Merkel announced on Wednesday the first tentative steps to ease the coronavirus lockdown in the coming weeks, stressing, however, that the measures had only achieved a “fragile, partial success” against the pandemic.

Stores up to 800 square meters (ca. 8,611 square feet) will be allowed to reopen once they have “plans to maintain hygiene”, Merkel announced following talks with the leaders of Germany’s 16 federal states.

The chancellor said the country “must keep focused and keep going”, adding that they “do not have a lot of room for maneuver”.

Large public gatherings including religious services will remain banned until Aug. 31 and bars, cafes, restaurants, cinemas, and music venues will all remain closed as well.

Also, on Wednesday, Germany’s economy ministry said the recession that started in the country in March was set to last until the middle of the year.

“Falling global demand, interruption of supply chains, changes in consumer behavior, and uncertainty among investors” are now being felt across the country and beyond, the ministry of Europe’s largest economy said.

The German government last month passed a stimulus package worth €750 billion ($816 billion) in a bid to help ease the effect of the virus, while last week the EU agreed a €500 billion rescue package for member states hit hard by the outbreak.

EU heads of state and government are also scheduled to hold a video conference on April 23 to discuss further economic recovery measures.

Germany is one of the few European countries that are cautiously cutting back their restrictions in order to revive their economies.

Denmark has reopened schools and nurseries for children up to the age of 11, construction and manufacturing work resumed in Spain, Austria reopened many smaller shops and allowed some outdoor sport such as tennis, golf and sports from May 1, while a few regions in Italy have reopened bookshops and children’s clothing stores.