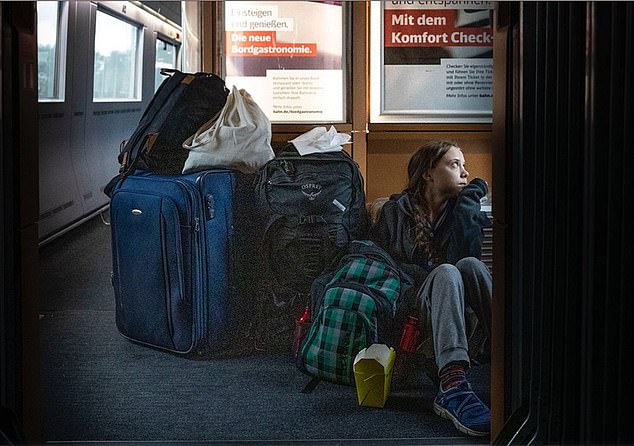 Greta Thunberg angered the German railway service, Deutsche Bahn, after sharing a photo of herself on Twitter sitting on the floor of a packed train on her way from the COP25 climate summit in Madrid to Sweden.

The 16-year-old girl wrote on Twitter, “Traveling on overcrowded trains through Germany. And I’m finally on my way home!”

Deutsche Bahn then sent Thunberg a sarcastic Tweet aimed at correcting the record.

“Dear #Greta, thank you for supporting us railroad workers in the fight against climate change! We were pleased that you were on the ICE 74 with us on Saturday. And with 100 percent green electricity. It would have been even nicer if you had also reported how friendly and competent you were looked after by our team at your seat in first class.“

Thunberg failed to mention that she was traveling first-class in her first tweet that has garnered nearly 200,000 likes. She is now being accused of misleading social media users with her photo, which showed what looked like a tired Thunberg sitting on the floor next to her luggage while journeying to her next climate summit.

Thunberg quickly responded to Deutsche Bahn’s tweet, saying, “Our train from Basel was taken out of traffic. So we sat on the floor on 2 different trains. After Göttingen I got a seat. This is no problem of course and I never said it was.

“Overcrowded trains is [sic] a great sign because it means the demand for train travel is high!”

Thunberg’s sparring with DB came just hours after she had spoken before a furious climate protest in Turin, Italy, where she garnered world headlines for saying that citizens should “put leaders against the wall” if they continued running away from their climate obligations.

The phrase in English implies punishment or even execution, drawing criticism that the climate activist had gone too far in calling for violence against world leaders.

She later apologized for the remark as well, claiming that a Swedish phrase had been lost in translation.

“But of course, I apologize if anyone misunderstood this. I cannot enough express the fact that I – as well as the entire school strike movement – are against any possible form of violence. It goes without saying but I say it anyway.”

Thunberg’s journey through Germany was the last leg of a continent-spanning trip, which began when she traveled to New York on a low-emissions yacht last August.

Greta Thunberg wants countries like Poland to phase out coal

Some world leaders like France’s Emmanuel Macron have directed criticism at Thunberg, saying he supports her activism but that she should focus her protest efforts on countries like Poland that still use large amounts of coal.

“Marching every Friday to say that the planet is burning, that’s nice, but that is not the problem,” said Macron.

“Go protest in Poland! Help me move those I cannot push forward.”

Thunberg has told countries they need to phase out coal as an energy source soon or the world will face climate disaster. Coal remains a source of jobs and cheap energy in Poland, which has led the country to fight to keep using the energy source.