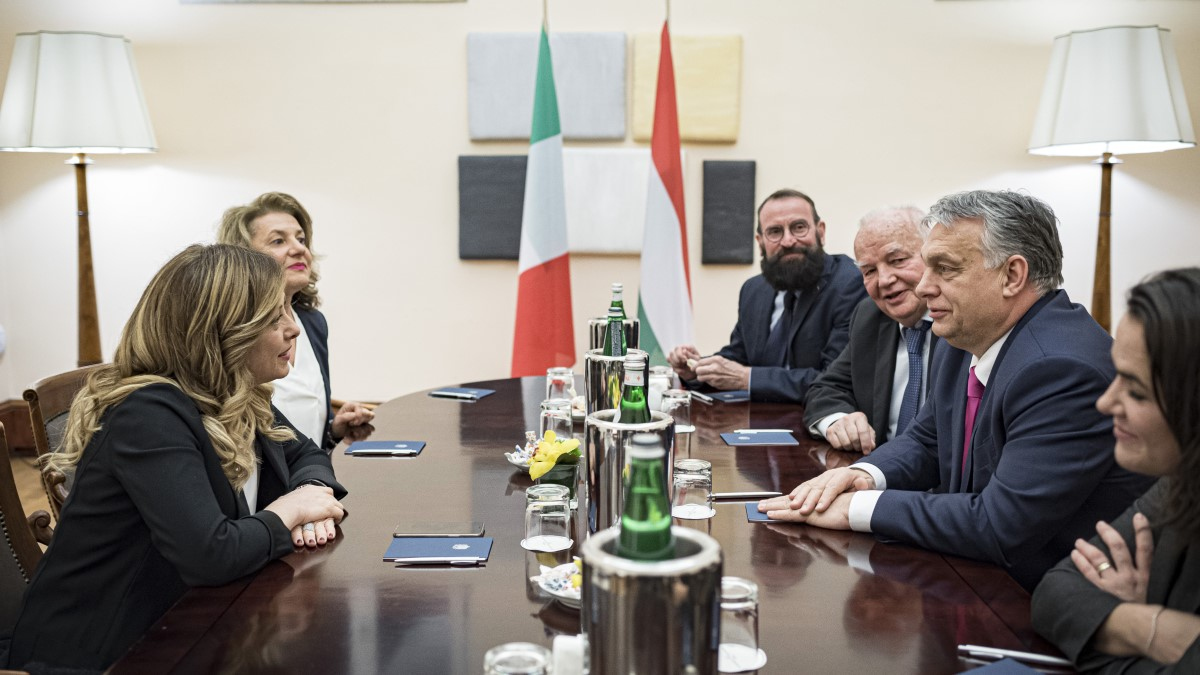 With Prime Minister Viktor Orbán we share the same views regarding the future and mission of Europe, which are also represented by the Oct. 23 national holiday, Fratelli d’Italia leader Giorgia Meloni told national news agency MTI on Thursday.

“Together with Viktor Orbán, we believe that we need brave peoples like Hungary’s 1956 heroes fighting for freedom, who remind Europe of its true identity, because that is the only way to build a future,” Meloni said.

She was attending the awarding of Pier Francesco Pingitore, the author of the Italian song “Avanti ragazzi di Buda”, which translates to “Go, boys of Buda”. The song, which became the anthem of the Italian right, was born in 1966, on the tenth anniversary of the October Revolution. Pingitore was awarded the Officer’s Cross of the Hungarian Order of Merit. The song has also become the unofficial anthem of the SS Lazio football team and the Italian right.

“I always feel at home among Hungarians, not only because of the national flag of the same color and strong historical ties, but also because with Viktor Orbán we see the perspectives and mission of Europe in the same way, and this is included in the Hungarian national holiday on October 23rd,” Meloni said.

She added that the young Italian people had been standing by the Hungarian freedom fighters with heart and soul for generations knowing that “the Hungarians had made sacrifices for the whole of Europe. The Europe that has been created through so many struggles to protect borders, to secure Europe’s roots, its identity, its values, must continue to prevail today,” Meloni added.

“Today’s Europe, on the other hand, wants to be supranational sovereignty by restricting the freedom of its member states. That is why I think it is completely natural for the peoples of Europe to react when they want to shake that yoke off,” she said.

Speaking earlier in the Italian Parliament, she said to Prime Minister Giuseppe Conte that Italy, as a vassal, was unable to defend itself, its independence, its freedom, its strategic interests, while other “less powerful nations like Hungary and Poland were raising their heads”.

Giorgia Meloni called it unacceptable that the EU “blackmails” through its rule of law procedure Budapest and Warsaw, which protect their borders, roots and identity, attempting to deprive them of  the resources of the Economic Recovery Fund. She once again thanked Prime Minister Viktor Orbán, who congratulated Meloni on her election as head of the European Conservatives and Reformists.

“Together with Viktor Orbán, we believe that Europe needs brave peoples, reminding us that Europe is not Maastricht, not the Stability Pact, not all those oppressive bureaucracies, but a civilization to be defended because that is the only way to build a future,” Meloni said.