Throughout all of Poland, there have been incidents involving the vandalization of churches and sacred places at the hands of left-wing and pro-abortion activists 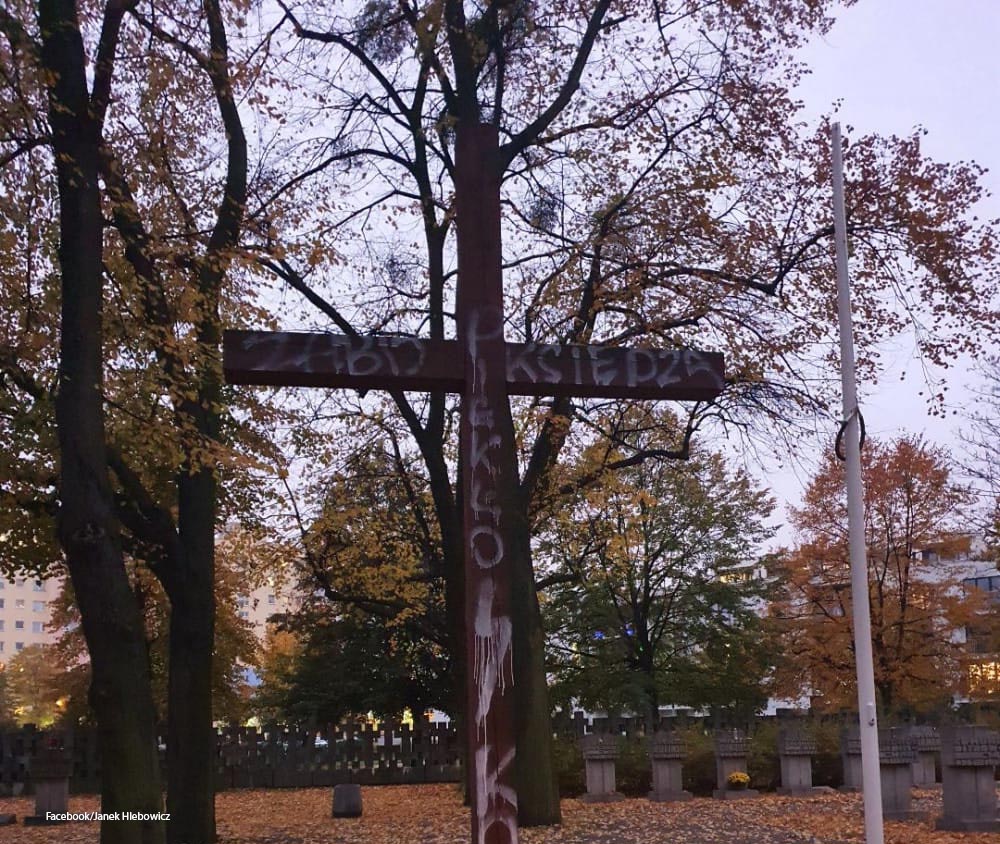 A cross located in the central part of the “Victims of Nazism Cemetery” in Gdańsk has been vandalized with anti-Christian slogans. In addition to pro-radical feminism messages, the assailants also used graffitied the words “kill the priest” using white paint on the cross. A lightning bolt, the symbol of the current pro-abortion protests in Poland, was also painted on the cross.

The Gdańsk police are currently investigating the incident, according to Polish news outlet Prawy.pl.

Historian and spokesman of the Gdańsk Institute of National Remembrance (IPN) Jan Hlebowicz shared information about the profanation through social media and condemned the attack.

“‘Kill the priest’. The case of this cross profaned in this place hurts and bothers me. Yet another attack that has devastated me. I wonder if those who profaned today and destroyed in the past are aware how important this place is to citizens of Gdańsk. Here is a proposal: When the police find the culprits, as part of their punishment, they should receive an obligatory lesson in history,” he wrote on social media.

The mayor of Gdańsk, Aleksandra Dulkiewicz, emphasized that the cemetery is a burial site for over 20,000 Poles murdered during the Second World War. She also stated that the cross was cleaned after the police investigation in the area was completed.

The cross in Gdańsk was not the only object targeted at a Polish cemetery either.

The statue of the “Lost Children”, which is dedicated to unborn children in a cemetery at the Hażlach municipality in southern Poland, was also vandalized by what is assumed to be pro-abortion activists.

Mayor Grzegorz Sikorski underlined that the attack was yet another example of how the boundaries of thoughtlessness and decency were being crossed by activists. He explained that the statue was vandalized using black paint and it is possible that the statue had been permanently damaged, which will require the construction of a new one.

“My dear friends, this statue is a very symbolic piece for us where we came to light a candle and pray for unborn children. Many people worked for this place to be created. Unfortunately, one infantile action ruined it all. What kind of person do you have to be to spill paint over the statue of unborn children under the cover of night and ruin it irrevocably?” the mayor wrote on social media.

Poland has recently been hit with a wave of anti-Christian attacks following the country’s Constitutional Court ruling that eugenic abortion is unconstitutional. Churches have been vandalized along with statues of Saint John Paul II, the former Polish pope, have been destroyed across the country.