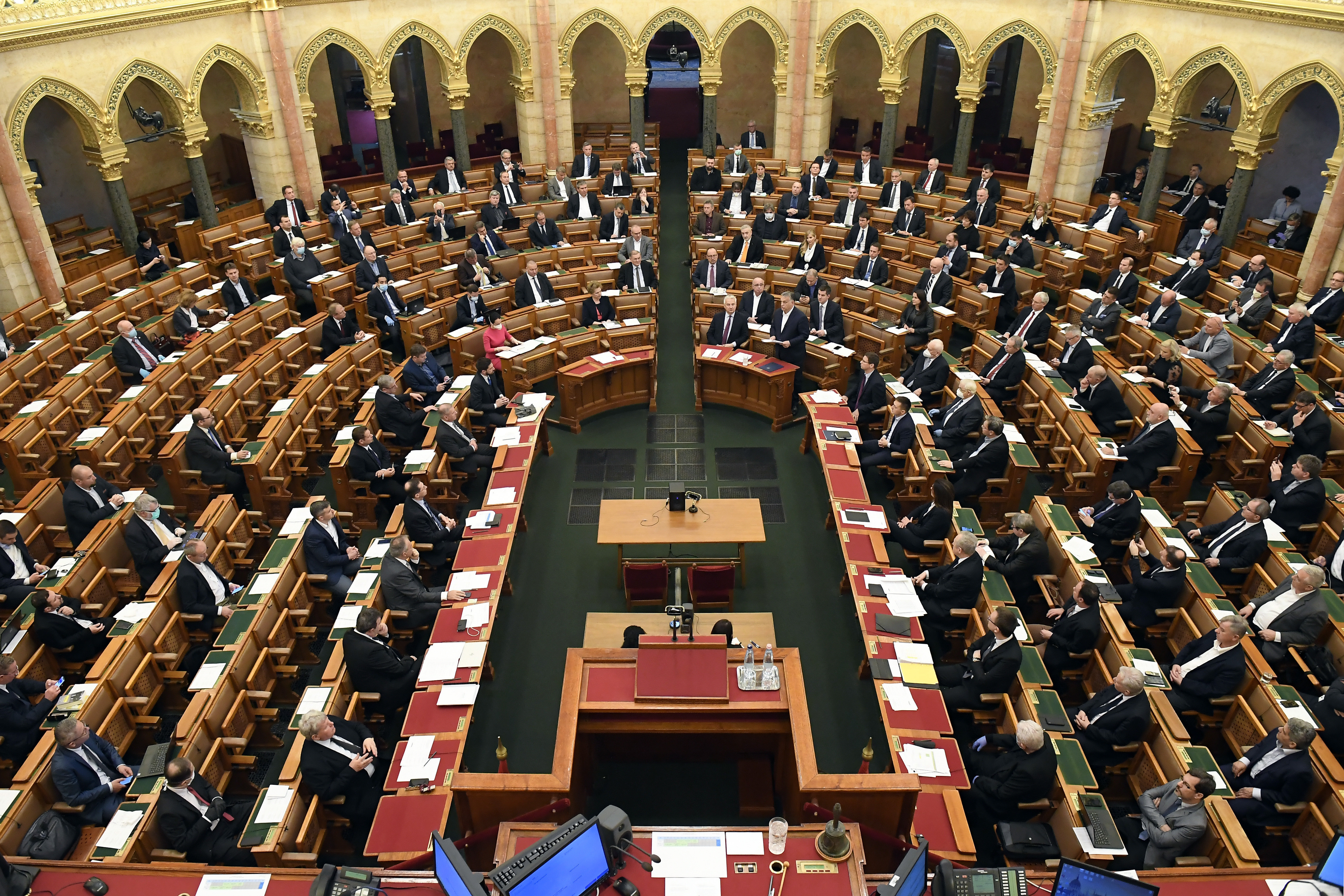 A number of false or sensationalistic claims are being circulated within the media about Hungary’s extension of its state of emergency, which has seen the Hungarian government granted special powers to fight the coronavirus crisis.

On Monday, the Hungarian Parliament approved an extension of the state of emergency in Hungary, which was initially authorized to last only 15 days. The “Coronavirus Bill” is meant to help the government react quickly to the coronavirus outbreak.

Since its passage yesterday, a number of media reports are promoting misleading information, with EU Observer writing Hungarian Prime Minister Viktor Orbán has been granted “indefinite authoritarian power” while others have even openly smeared Orbán as a “dictator” for implementing legislation that is similar to other measures taken in many other European countries.

The media is wrong about Orbán having unlimited power

The preamble of the law makes clear that Hungarian parliament can only take necessary emergency measures “to prevent and respond to the human epidemic of COVID-19.” In short, it is being put in place explicitly for the government to react to the coronavirus outbreak.

Furthermore, the law makes clear that a two-thirds majority of Parliament is still needed if the government wants to issue laws and decrees that go beyond the Disaster Management Act.

According to the law, the government can exercise its extraordinary powers only in relation to the prevention, treatment, and eradication of the harmful effects of the coronavirus epidemic, located in section [2§ (2)] of the law.

The media’s claims that Orbán suddenly has dictatorship powers do not align with reality, and the leader still has to answer to parliament.

The Hungarian government is also still required to follow “Fundamental Law”, which states this law cannot be suspended or abolished. In Hungary, the Constitutional Court is still operating with no restrictions and the government has no authority to restrict fundamental human rights.

All of these facts are notably absent from media reports, demonstrating a rush to admonish Orbán before journalists actually have read the text of the law.

No, Orbán did not ‘dissolve’ parliament

The new legislation did not suspend parliament but instead requires Orbán’s government to regularly inform parliament about what actions his government is taking to stem the crisis.  Even if government is not in session, the government must still provide updates to the House Speaker and heads of other political groups.

Is Orbán’s power under a state of emergency indefinite?

The major sticking point for a range of media outlets is that Orbán has indefinite power under the new “Coronavirus Bill”. According to Miklós Szánthó, the director of the Center for Fundamental Rights, this is practically speaking, not true:

“The question of when the epidemiological situation warrants the introduction or the lifting of the state of danger is not a legal question. Parliament will exercise control and oversight because it can and will continue to convene while the state of danger is in effect. While it’s true that the bill doesn’t put an end date on the extension of extraordinary measures, the Hungarian Parliament can withdraw its consent anytime when it’s in session with a quorum present.”

While no timeframe is given, parliament is fully in control of restricting Orbán’s powers and removing his ability to rule by decree at any time.

“At any given moment, Parliament must be in a position to take back the right of decision from the government,” Prime Minister Orbán said to the Hungarian National Assembly on March 23. “I don’t need a fixed deadline. You can take it back tomorrow morning if you consider it inadequate.”

More to the point, Orbán has a two-thirds majority in parliament, a fact that many media outlets are overlooking. Orbán’s Fidesz party and the Christian Democrats already have the needed majority in the Hungarian Parliament to basically pass any legislation they so desire as long as it falls under the country’s constitution and other international frameworks.

Szánthó makes the argument that from a political point of view, there is no reason for Orbán to indefinitely suspend parliament. After all, he has the needed votes to pass the legislation he desires to see passed.

“Why on earth would the government ignore a parliament where it has a two-thirds majority or try to exclude it from the decision-making process?” he writes.

In short, the so-called indefinite nature of the legislation is not actually indefinite. Parliament still decides when the emergency is over and government’s function returns to normal.

For Orbán to keep the situation in place after the emergency is over would not make sense politically. The ability for him to temporarily bypass parliament simply allows him to act faster in response to the coronavirus crisis and ensure government can still effectively function if parliament is no longer able to convene, which is a real possibility during the outbreak.

The Hungarian government is not going to start jailing opposition journalists

Some media sources have made the claim that Hungary can now start jailing journalists under the new measures. Such a claim is highly misleading. The new law makes it a criminal act for those who spread false information that could undermine or harm the government’s efforts to stop the coronavirus from spreading.

The legislation is in place for instances that are more dangerous than “spreading fake news and rumors”. The government is using the new law to try and prevent the spread of information specifically related to the coronavirus, a legitimate goal for any government to pursue..

Hungary, like many other European countries, is using special powers to govern

In a time when European countries are reeling from coronavirus, many other governments have introduced emergency powers that are similar to those seen in Hungary.

Countries with legal orders or state of emergencies declared include Italy, Spain, France, and a number of Central European states as well.

In Great Britain, Prime Minister Boris Johnson’s legislation will see parliament shutter for four weeks in April. It also vests extraordinary powers to the British government’s cabinet ministers, bypassing traditional parliament. The government in the country has never passed such measures during peacetime before.

The powers granted the government could last for up to two years, and include a number of new measures, including giving the ability for the police to force people into isolation and even close all transportation networks in Britain.

The vote will now have to be renewed every six months inside the Commons based on a parliamentary vote but it indicates that Orbán’s special powers are hardly unique during the crisis.

In France, President Emmanuel Macron has not suspended parliament but has used the crisis to push through extraordinary. For Macron, due to the French constitution, he does not even need parliament to pass measures, even with parliament still in session.

He has long lobbied for an end to France’s 35-hour work week and other labor reforms that have proved unpopular and led to the massive ‘Yellow Vest’ protests that have rocked his government for well over a year.

Macron is now being accused of wielding “draconian” new powers granted to him during the coronavirus crisis to push through his unpopular reforms, “including powers for employers to alter working conditions unilaterally and a general restriction of civil liberties.”

Of course, extraordinary legal measures vary in European states and semantics play a large role in determining what even constitutes a special power.  The French government pushed through its contested reform of the pension system and bypassed parliament in early March because the French constitution permits such an action if the government can survive a vote of no-confidence.

France has also declared a state of emergency after the November 2015 Paris terrorist attacks in the country that had a range of restrictions on civil liberties, with the measures lasting a full two years until November 2017.

Is the “Coronavirus Bill” constitutional?

The government says it is using the powers granted under the “Coronavirus Bill” to respond as quickly as possible to ensure the health of the Hungarian public and keep the Hungarian economy running during an extraordinary time.

While the bill does grant Orbán special powers to achieve those goals, it was also legally passed in accordance with the Hungarian constitution.

Szánthó writes that “according to Hungary’s constitutional regulations pertaining to special legal orders, the government may declare and terminate a state of danger and ‘may adopt decrees by means of which it may suspend the application of certain acts, derogate from the provisions of acts and take other extraordinary measures.'”

Furthermore, this special “extraordinary decrees” power will only be in place for 15 days unless parliament extends those decrees, which the parliament did on March 30.

A poll conducted by Hungarian think-tank Nézőpont Intézet found that 90 percent of all Hungarians agreed that emergency rule must be maintained and that the government currently has a 74 percent approval rate from Hungarians during the coronavirus outbreak. In short, there is broad support for Orbán to use special powers responsibly to fulfil the government’s goals of maintaining public health and order during the outbreak.