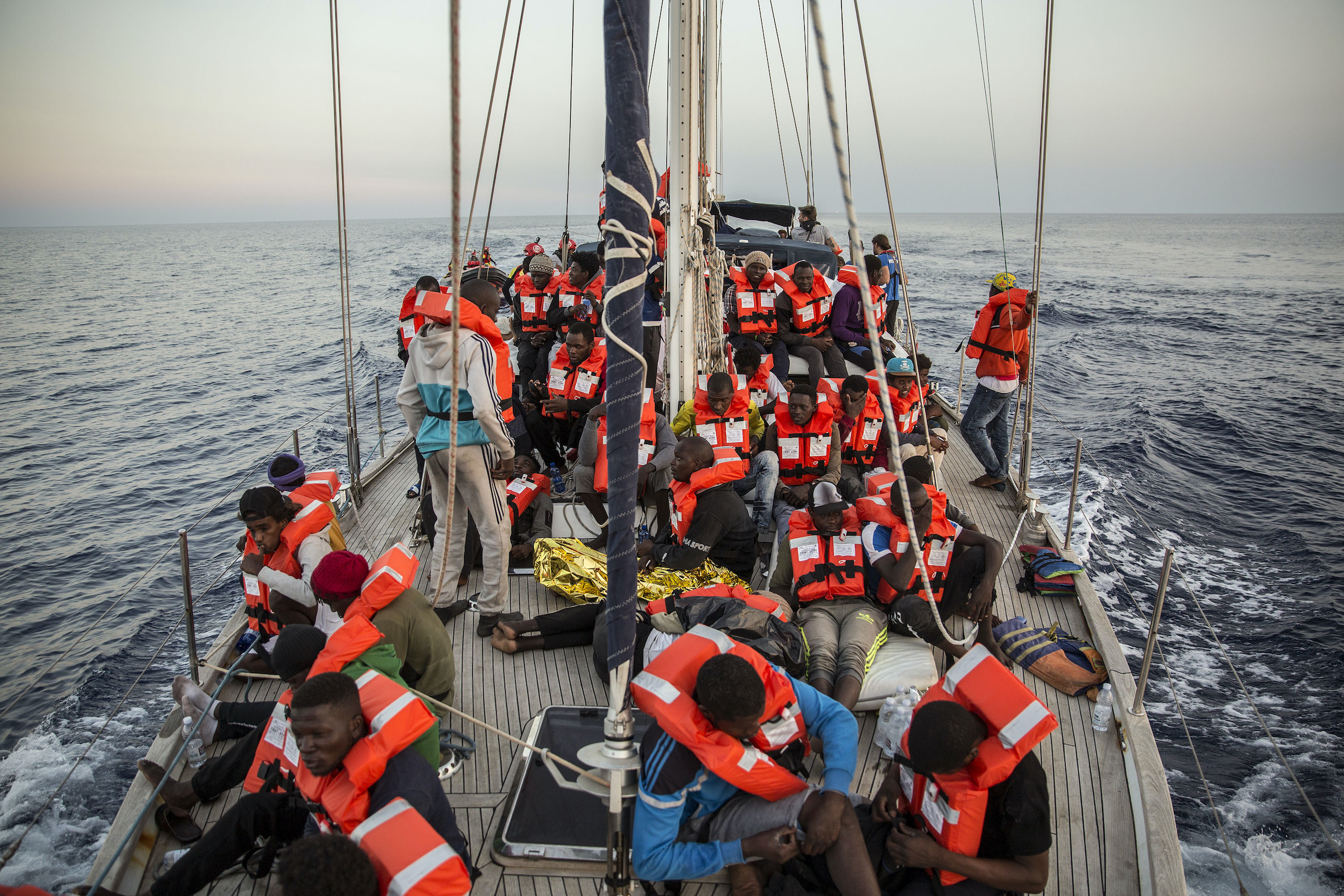 A number of NGOs in Italy are facing prosecution for so-called migrant rescue missions, which prosecutors say were actually human smuggling rings.

The public prosecutor’s office in Italy’s Ragusa announced a few days ago that it had opened an investigation into whether the Italian NGO Mediterranea Saving Human was accepting paid transport for illegal immigrants on the ship Mare Jonio.  Following this news, it was the turn of the public prosecutor’s office in Trapani on Wednesday to announce that it had concluded investigations against 24 NGO members over suspicion of active collaboration with Libyan smugglers in 2016 and 2017. Twenty-one of them are now facing trial.

In the European Parliament, the left is nevertheless blocking the request of the European Conservatives and Reformists (ECR) group to focus during the next plenary session on the rapid increase in the number of migrants landing in Italy. The request was made on the initiative of the national-conservative Brothers of Italy party (FdI), which is the only party left in opposition to the new Draghi government.

“The opposition of the left to ECR’s request to address at the next plenary session over the worrying increase in the number of migrants landing in Italy in recent months, and the role of NGO vessels operating in the Mediterranean, demonstrates once again its unwillingness to address in a serious and appropriate manner a central issue for the present and future of Italy and the whole of Europe. Such a request appears to be even more necessary in the light of judicial investigations revealing the involvement of certain NGOs in human trafficking in the Mediterranean,” complained the Brothers of Italy announced in a statement issued on March 4.

As for Matteo Salvini, whose party, the League, has joined the Draghi government, he described the situation as “unsustainable”, stressing that “the League has been denouncing this for years” and asking that this time “we get to the bottom of things” because “Italians deserve to know the truth”.

Migrant rescue ships could be leading to more deaths

For the first two months of the year, the number of arrivals was 262 in 2019, when Salvini was at the helm, rising to 2,359 in 2020 and 4,536 in 2021. Not to mention the small boats that arrive directly from Tunisia to Lampedusa and whose number has risen sharply following a mass amnesty of illegal immigrants that was decided in spring 2020. These numbers are also not expected to fall, as NGOs are once again very active in the central Mediterranean with ever-larger ships with the mission to rescue migrants, but which have also been seen as a draw for more migrants to make the crossing. Unless firm convictions eventually throw them off balance, these NGOs are expected to continue operating with impunity.

The investigations underway are now being seen as vital to shedding light on the illicit practices of these left-leaning NGOs acting — sometimes by their own admission — more with an ideological aim to promote mass immigration and the creation of multicultural societies in Europe than with a genuinely humanitarian purpose. This is all the more true as their presence, by creating a pull factor, increases both immigration to Europe and the number of drownings in the Mediterranean.

In 2017, for example, Médecins Sans Frontières posted on its website the filmed testimony, which has since been removed, of the captain of its boat Dignity I, Madeline Habib. The woman, whose Egyptian-born parents had emigrated to the United Kingdom before moving to Australia, was outspoken in explaining that migration was something she cared about, and her actions were motivated by the fact that she believes everyone had a right to a future and should be able to emigrate safely if they wished to do so. She only mentioned anything about her activity being related to saving lives in one sentence in a speech that lasted nearly three minutes.

The NGOs under investigation by the Trapani prosecutor’s office are the German NGO Jugend Rettet and its boat Iuventa, the Franco-Swiss NGO Médecins sans Frontières and its boat Vos Prudence, and the British NGO Save the Children and its boat Vos Hestia. These three NGOs are suspected of having voluntarily promoted illegal immigration by cooperating with smugglers.

In September 2017, the Italian television channel Canale 5 broadcast a video recorded with a camera mounted on the helmet of one of the Vos Hestia’s “rescuers”. The video, dating back to June of the same year, showed the transfer by Arab smugglers of illegal black immigrants from the boat used to bring them from the Libyan shore to the inflatable dinghy of the NGO Save the Children. One of the smugglers could be seen violently beating his clients with rubber truncheons to make them pile up on the Save the Children canoe in front of the docile “humanitarians”.

Other smugglers waited quietly on small motorboats to retrieve their canoes used to transport people. In the background, other boats used to illegally transport people could be seen. This was happening at a time when the sea was calm and those seeking to illegally immigrant to Europe were in no plausible danger. Prosecutors are expected to make the case that they could very well have returned to shore if the Vos Hestia had not been there to pick them up and take them to Italy in an operation that had visibly been agreed directly with the Libyan smugglers.

The Public Prosecutor’s Office in Trapani also has testimony and photos proving the presence of smugglers during the transshipment of illegal immigrants from the Iuventa to the vessel Vos Hestia. It also has reports of an undercover policeman who was sailing as a crew member on Vos Hestia between May and June of 2017. The photos and videos taken by this undercover police officer had allowed prosecutors to order the sequestration of the Iuventa in July 2017. In addition, expert reports have since been carried out onboard instruments and logbooks as part of the investigation by the public prosecutor’s office.

Today, the prosecutor of Trapani, therefore, says the state has accumulated evidence that these NGOs were acting in direct contact with migrant smugglers. Ten occurrences at sea are believed to be the focus of investigations that have now been underway for more than three years.

According to the prosecutor’s office, the checks showed that the NGOs had passed off as search-and-rescue (SAR) trips to meeting points at sea agreed with the smugglers where the NGO boats were waiting for their human cargo. In order to conceal their practices, they also allegedly falsified their communications with the Italian authorities.

Among the events under the scrutiny of prosecutors, there is, for example, the arrival of the Vos Hestia in the Libyan SAR zone in the early morning of May 5, 2017, without having informed the Italian maritime authorities of the voyage undertaken the previous evening. To disguise the fact that the meeting point had been agreed upon in advance, the crew members allegedly falsified the documentation of the rescue operation. A few days later, according to the prosecutor’s office, the same vessel reported its position off Libya using its searchlights, which is a prohibited practice. The public prosecutor’s office in Trapani is also said to have proof that the crew of the Vos Hestia returned life jackets worn by a group of migrants recovered at sea to the smugglers.

As for the investigation by the Ragusa public prosecutor’s office concerning the NGO Mediterranea Saving Humans, it concerns the transfer of 27 migrants on board the Mare Jonio last Sept. 11. These migrants were transferred from the Danish ship Maersk Etienne which had rescued them in Maltese waters 37 days earlier. According to the Ragusa prosecutor, the shipping of the illegal immigrants occurred “only after the conclusion of an agreement of a commercial nature between the two vessels’ shipowners”. Under that agreement, the Mare Jonio “received a considerable sum for the service rendered”, which earned it an investigation for “incitement to illegal immigration and violation of the rules of the Navigation Code”. It is reported that the total amount of €125,000 was paid to the Mare Jonio to take these migrants to Italy, or €4,600 per migrant.

The League and Brothers of Italy have demanded an “urgent reaction” from Interior Minister Luciana Lamorgese. But Lamorgese is one of those ministers who retained their position with the change of government, and it was precisely she who reopened Italian ports after the departure of her predecessor Matteo Salvini in August 2019.