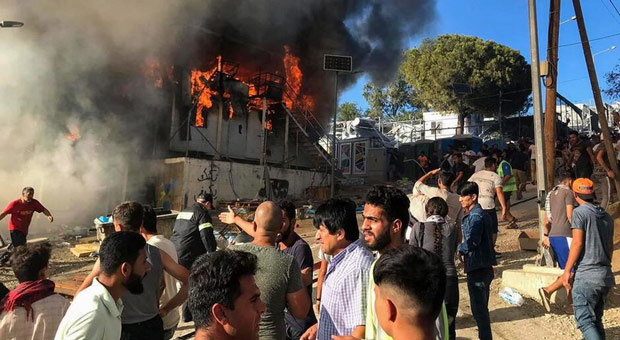 Migrants have now burned down significant portions of their camps in three separate incidents following riots and ethnic clashes, and despite Greece dealing with coronavirus lockdowns and a crashing economy, Amnesty International is now calling for Greek authorities to evacuate migrants from Greek islands camps to the mainland.

The incidents on the Greek islands follow a long history of migrants starting fires in their own camps, both in Greece and other European nations.

On April 26 and the other on April 27, three separate fires ripped through the Vathy camp on the Greek island of Samos, leaving tents and containers destroyed and 200 residents homeless. Greek authorities say the fires started due to clashes between people living inside the camp, and ethnic tensions may have been a factor in those clashes.

Unconfirmed reports from Ekathimerini also indicate that migrants fueled the second fire in an effort to be taken out of the Vathy camp, which houses 7,000 migrants despite being meant to fit 648.

Two weeks ago, fires broke out following a riot inside the Vial camp on Chios island that left hundreds of residents homeless. During the riots, migrants attacked police and set fires following rumors that a 47-year-old woman in the camp died of coronavirus. The rumors later turned out to be false after health officials stated that the woman died for reasons unrelated to the coronavirus. Three migrants were arrested in relation to the arson.

According to the Greek migration ministry secretary Manos Logothetis, the facility of the European asylum service on Chios was also destroyed during the riots.

“A large part of the camp’s administrative services was destroyed,” Logothetis said.

Migrants have repeatedly set their housing facilities on fire

Migrants setting fire to their own housing and camp facilities is not a new phenomenon. For example, in 2016, the BBC reported that nine people from Senegal, Iraq, Syria, and Cameroon, were arrested after a massive fire broke out in the Moria camp on the Greek island of Lesbos.

Rami Alam, an Egyptian migrant living in the camp, said according to Middle East Eye that the “fire was started on purpose and that the perpetrators intended to repeat the act if they were not moved from the camp onto the mainland”.

“I heard many [migrants] speaking today who said ‘this is just the beginning’,” he told MEE. “They said ‘we will burn it again if we must stay here’. They want to leave, they want to go to Europe. They want Europe to have a solution for the refugees. I’m so worried. I know they will do it again.”

“No it wasn’t an accident. Definitely not, it was on purpose. If any fights happen again they will do it again, they will burn the fields and the camp,” he added.

Alam wasn’t wrong, and migrants have intentionally set fires in a bid to force authorities to send them to mainland Greece on many occasions, a move that Amnesty International had made no effort to condemn.

In 2016, migrants also set fire to a migrant housing center on the island of Lampedua in “protest” over conditions inside the facility, which involved lighting mattresses ablaze.

Once again in 2017, migrants set fire to the Moria camp on Lesbos after a woman and her six-year-old child died in a gas cylinder explosion while they were cooking. Migrants, reacting to what was clearly an accident, reacted by rioting and committing arson.

Even after making it to richer countries in the north of Europe, migrants have continued to set fires to their accommodations. For example, in 2017, five migrants were arrested for a suspected arson attack after “setting fire to a mattress” inside the Hoevelhof-Staumuhle migrant facility in the German state of North Rhine-Westphalia, resulting in 50 people being injured and €10 million in damage. A Red Cross worker said later that the migrants burned down the facility because they were furious over a lack of gummibears and Nutella available in the facility during nighttime hours.

In 2016, after a migrant housing facility was burned down in Düsseldorf, authorities said they were investigating six migrants for arson in relation to the fire.

Also in 2016, when authorities moved to evacuate the migrant camp in France’s Calais, migrants burned down large portions of it in a last act of “defiance”.

In 2017, a fire broke out during a fight between migrants in a France’s Grande-Synthe camp near Dunkirk that left 1,500 migrants homeless. Ten people were reported injured in the blaze.

Following the coronavirus crisis, The Greek government had already planned to transfer 2,000 vulnerable asylum seekers to the mainland and place them in hotels and other accommodations, all paid for with funding from the European Union, but that plan has run into roadblocks after Greek citizens protested the decision over fears that the migrants could spread coronavirus on the mainland.

Despite concerns from Greeks, Amnesty International is advocating Greece sends far more than 2,000 migrants to the mainland and place them in hotels.

“It has never been more urgent for the Greek authorities to evacuate people from the camps and transfer them to safe accommodation on the mainland. The Greek government must urgently ensure that it fulfills its promises to transfer vulnerable asylum seekers in practice,” said Massimo Moratti, deputy director of Amnesty International’s European office, adding that the “recently launched scheme by IOM, UNHCR, and the Greek Government to evacuate over 2.000 vulnerable asylum-seekers from camps to hotels and apartments on mainland Greece is seemingly already encountering some obstacles.”

Greeks on the mainland have actively protested moving migrants into their towns, including Messolonghi, where the migrants were supposed to be sent. The mayor of Messolonghi along with municipal councilors say the hotels should remain open for the upcoming tourist season, especially during a time when Greece’s hotel industry is reeling from the coronavirus downturn.

“The departure of 1,500 vulnerable people from Moria, scheduled to occur last week was deferred to an unspecified date. This was reported to conduct transfers in a more controlled and safer way, to allay the fears of the local communities, after protests broke in the city some of them were destined to go to, including by the authorities. The people living in these camps can wait no longer,” said Moratti.

Amnesty International’s call to transfer migrants to the mainland does not address migrants burning down their own camps, ethnic clashes, or condemn rioting over a rumor that turned out not to be true.

Greek islanders also do not want to keep migrants where they are, and many are fed up with the overcrowded migrant camps on their islands.

Moratti thinks that European member states should do more to help refugees in Greek camps such as participate in the relocation of the refugees. He also said that the spread of the coronavirus is a major concern in the camps.