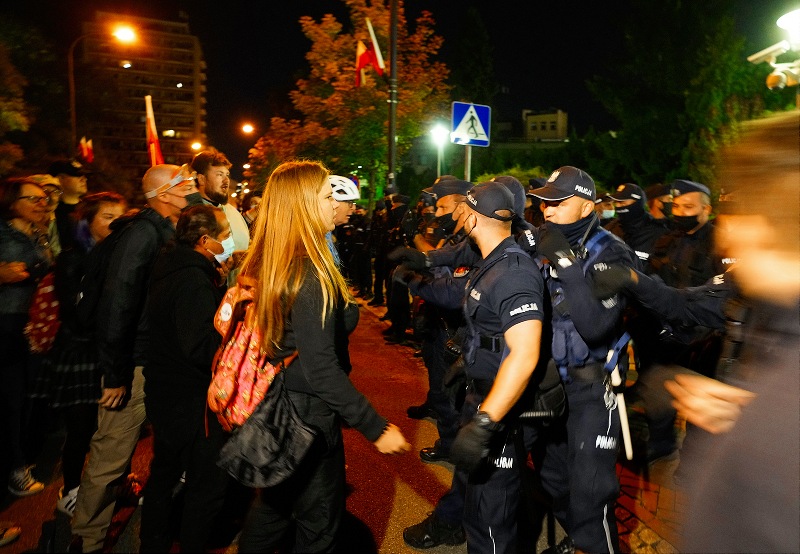 People protests outside the Polish parliament after lawmakers passed a bill seen as harmful to media freedom in Warsaw, Poland, Aug. 11, 2021. Poland's parliament voted Wednesday in favor of a bill that would force Discovery Inc., the U.S. owner of Poland's largest private television network, to sell its Polish holdings and is widely viewed as an attack on media independence in Poland. (AP Photo/Czarek Sokolowski)
Anthony Blinken media law Protests TVN US News Poland

The Sejm has accepted the amendment to the bill on television and radio broadcasting that prevents non-European owners from having controlling stakes in Polish media companies. A total of 228 MPs voted in favor of the bill, while 216 were against it and 10 abstained. The bill will now go to the Senate.

According to the bill, a license for broadcasting radio and television programs may be obtained only by subjects whose headquarters are within the European Economic Area under the condition that they are not dependent on a foreign person from outside of the EEA.

In practice, it would push American company Discovery to sell its controlling stake in TVN, a liberal network with many channels that operates the news station TVN24 and has a flagship evening news program.

Violent pro-TVN protesters gathered in front of parliament on Wednesday night to oppose the bill. They shouted vulgar slogans against Law and Justice (PiS) and Paweł Kukiz MP, rock musician turned politician, who backed the bill in the parliament and who has become the target of hate following the vote.

“Kukiz you d**k, come fight us!” the furious protesters shouted. Other slogans included “f**k PiS and Kukiz.” The protesters are supported by opposition politicians from the Civic Platform (PO) and Szymon Hołownia’s Poland 2050.

Confederation MP Dobromir Sośnierz was also attacked. In addition to verbal aggression, he was also the victim of physical violence and was shoved about by one of the protesters.

Prime Minister Mateusz Morawiecki condemned the attack on the MP on Twitter. “Such behaviors are scandalous and extremely detrimental to society. The whole political class should condemn this behavior,” he wrote.

The United States has also reacted to the vote in parliament. US Secretary of State Antony Blinken expressed “deep worry” due to Polish parliament passing amendments to the administrative procedure codex (KPA) and the so-called “lex TVN”.

“These pieces of legislation run counter to the principles and values for which modern, democratic nations stand,” Blinken said in an official statement.