A young LGBT activist was interrupting people during prayer but in response, an elderly woman kissed her feet in a touching gesture on the streets of Warsaw 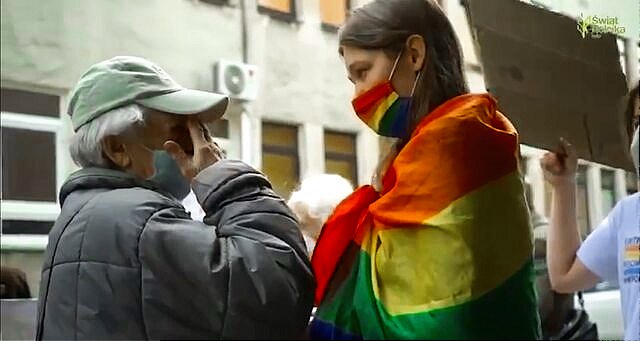 A young LGBT activist was interrupting people during prayer, but in response, an elderly woman kissed her feet, leading to a surprising conclusion to the whole scene.

The incredible moment took place on Warsaw’s street when a group of seniors gathered in front of a Warsaw court to pray for an end to the attacks against Catholic radio and television Radio Maryja and TV Trwam, reports portal Dorzeczy.pl

At one point during the prayers, a 21-year-old woman and LGBT activist approached the group wrapped in an LGBT flag. In a video published by Radio Maryja on social media, the woman is observed trying to interrupt and provoke the people who were praying by shouting out insulting poems and rhymes.

The stunning turn of events took place when one of the elderly women who was praying walked up to the activist, kneeled in front of her and kissed her feet. The activist, who just mere moments before was mocking the women praying, began to reassure the crying elderly woman who had approached her. At one point, both women hugged each other.

“My whole life, I fought for Poland and I lived to see a moment when I’m close to leaving this world that Poland is divided. I am very sad because of this, I feel terrible. And these children, our poor children, which were raised by ‘non-Polish’ Poles,” the elderly woman said.

The video ends with both women making the sign of the cross.