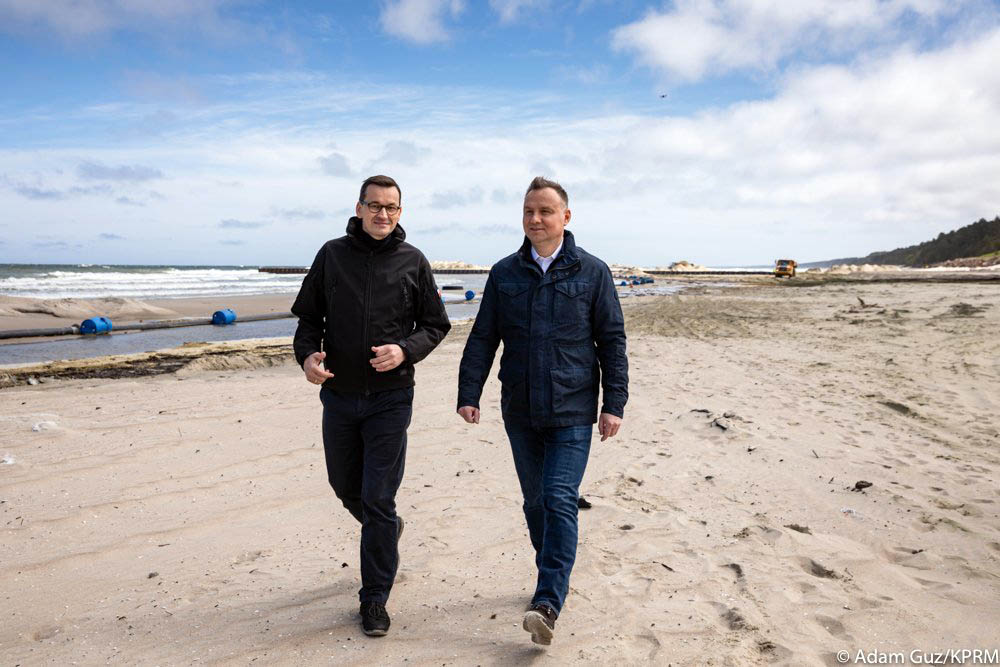 During an official visit to the Vistula Spit construction site, President Duda said Poland needs ambitious investments to overcome the coronavirus crisis. He said the Polish economy is already slowly and steadily reactivating thanks to the anti-crisis shield and funds paid out by the government to support Polish businesses.

The president highlighted that both Poles and the Polish government are ambitious, which is why they are willing to carry out key investments. “We do not want to interrupt, limit, lessen or God forbid terminate them, because large investments are our economy’s driving force,” the president said.

President Duda added that large investments such as the Vistula Spit canal and the Central Communication Port (CPK) will create many new jobs and that 50 companies are already involved with the canal project. He explained that the Vistula Spit investment strengthens Polish sovereignty and independence because Poland will not have to ask for Russia’s permission to commute through the Strait of Balitysk.

Meanwhile, PM Morawiecki said the investment plan is Poland’s proposal to exit the current crisis. “It will help the modern Polish economy catch up with the West,” he said.

PM Morawiecki underlined that if not for the cooperation between the government and the president, there wouldn’t have been successes in fighting the coronavirus. “We need the support of great leaders to carry out large development and reconstruction programs. President Andrzej Duda is one such great leader,” he said.

During the visit, the prime minister also criticized the Civic Platform’s most likely candidate for president, Rafał Trzaskowski.

“There are politicians like him, who do not want these investments, such as the Vistula Spit or the CPK. They say: “why do we need this canal, since the Strait of Balitysk exists?”, which means dependence on Russia for several years,” he stated.

The prime minister reminded that a year ago, Trzaskowski argued against the necessity for building the CPK since there was already a hub in Berlin. “No, Mr. Trzaskowski. We need large investments and a guarantee that Duda’s plan will come to fruition, that the great plan of rebuilding Poland after the coronavirus will truly be something that Poles have been waiting for,” the PM concluded.