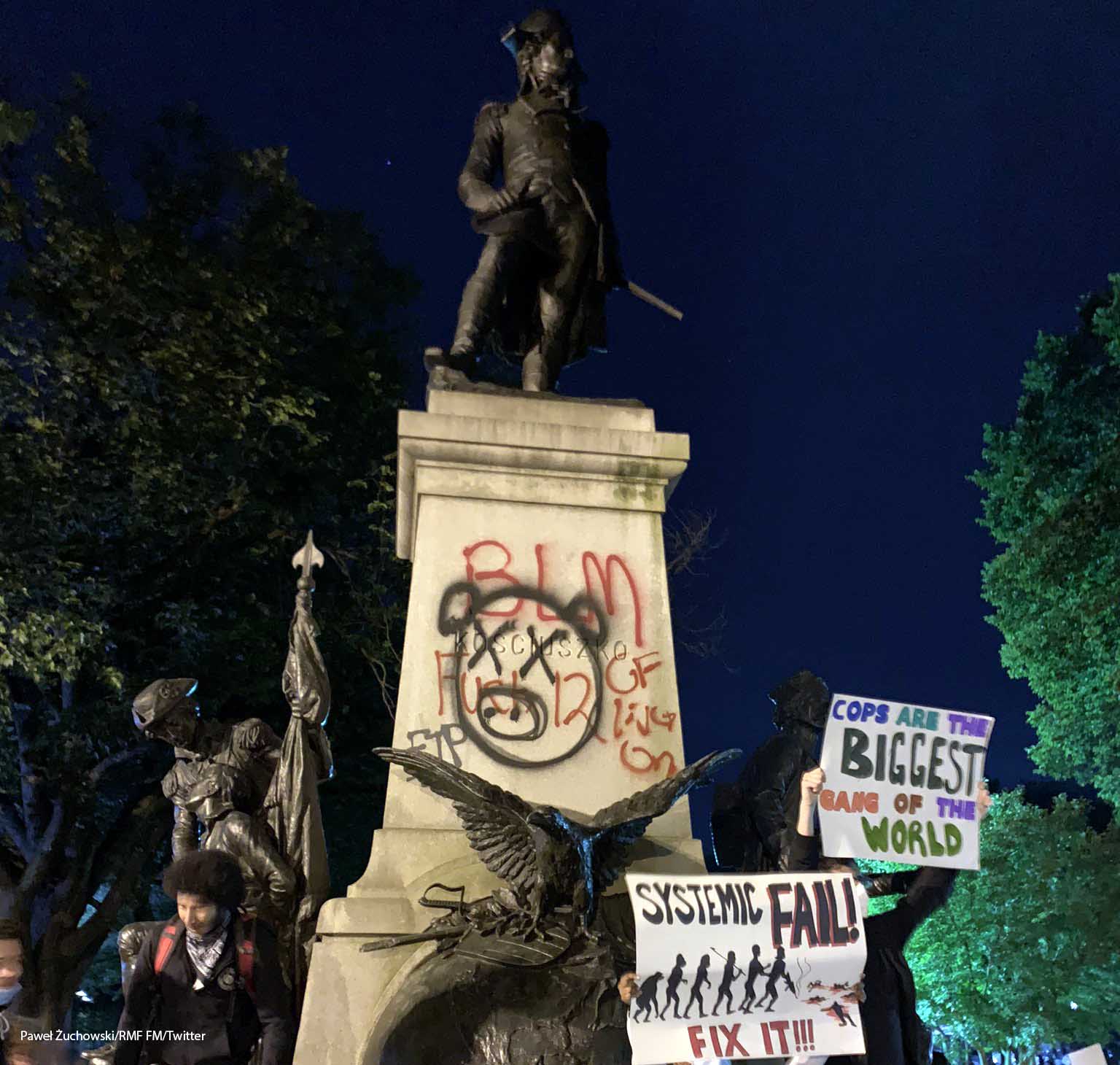 Despite an imposed curfew, Washington D.C. saw intense protests and riots due to the death of George Floyd at the hands of the police in Minneapolis, with vandals defacing a statue of Polish-American hero Tadeusz Kościuszko with Black Lives Matter graffiti and slogans directed against U.S. President Donald Trump.

Kościuszko, a colonial war hero who was active supporter of American indepedence from Great Britain was targeted despite his

RMF FM radio correspondent Paweł Żuchowski shared a video in which Kościuszko’ was being vandalized:

“This is how Tadeusz Kościuszko’s statue in Lafayette park was destroyed. This protest has nothing to do with a peaceful manifestation. Now, the statue is covered with vulgar phrases addressed at President Trump. The statue was also spat and urinated on. Shocking.”

Kościuszko was not only a supporter of democracy, a brilliant general, and a supporter of American and Polish independence, but also a fighter for the rights of ethnic and racial minorities. In his will, he had given away a part of his fortune to buy out and free several of Thomas Jefferson’s and other slave-owners’ black slaves.

Kościuszko’s will had also instructed to give the freed slave education so that they could function properly in society. Jefferson, a close friend of Kościuszko, did not in the end abide Kościuszko’s will.

Many historians believe that the will was ahead of its times. He was also recognized for his service as a colonel in the U.S. Continental Army during the Revolutionary War. He was considered a brilliant architect who designed and supervised construction of modern fortifications, including at West Point in New York. Kościuszko, who played a vital role in winning the Battle of Saratoga, was eventually promoted to brigadier general.

His statue in front of the White House was unveiled in 1910. A copy of it is located in Warsaw.

Polish Ambassador to the U.S. Piotr Wilczek expressed outrage at the vandalization of the statue.

I am disgusted and appalled by the acts of vandalism committed against the statue of Thaddeus Kościuszko in DC, a hero who fought for the independence of both the US and Poland. I implore @WhiteHouse & @NatlParkService to quickly restore the statue to its original state. https://t.co/5VuB33svpp

Kościuszko’s statue is one of only many monuments and statues that have been targeted during protests related to George Floyd, with the Lincoln Memorial also being defaced by protesters.