Spain: Madrid becomes one of the most right-wing capitals in Europe with election victory of Isabel Ayuso

The tone of the campaign was a stark choice: socialism or freedom 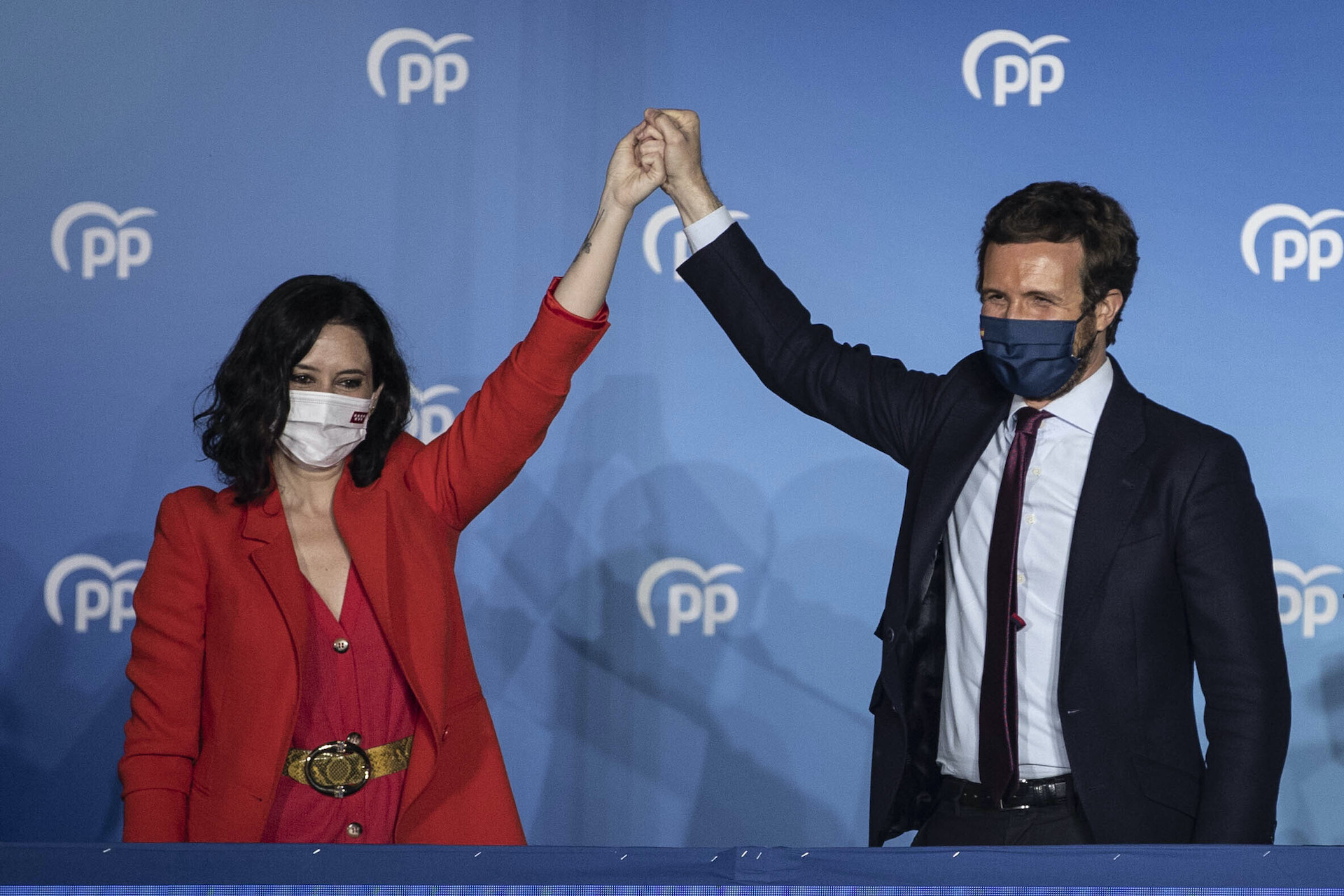 Madrid’s election yesterday resulted in a major victory for the right-wing in Spain’s capital of Madrid after the conservative People’s Party (PP), led by regional president Isabel Diaz Ayuso, won the ballot with 65 out of 137 regional parliament seats. The victory effectively doubled the number of regional seats the party won from the last regional election.

Despite the overwhelming victory, Ayuso is still shy of a majority of 69 seats, but her party is expected to ally with the right-wing, anti-immigration Vox party to give her control of Madrid. Turnout was huge despite the coronavirus pandemic, with 69 percent of residents turning out to vote compared to 59 percent in the 2019 regional election.

Ayuso campaigned under the slogan of “Freedom” and actively promoted relaxing COVID-19 measures. Much of her criticism was focused on the left-wing government of Socialist Pedro Sánchez for what she said was its poor management of the coronavirus crisis, including draconian lockdown measures.

Ayuso called early elections on March 10, after her centrist partner Cuidadanos approached the socialists in the Murcia region in an attempt to overthrow the local executive. Fearing the same fate, Ayuso caught the Socialists and Ciudadanos by surprise by calling an early election.

PP regional leader Ayuso needs at least an abstention from another party to form a new government#Elecciones4M pic.twitter.com/DkAiAcyNgj

The conservative party presented a stark choice during the campaign: socialism or freedom. By socialism, the right-wing of Madrid pointed to a hike in taxes and closures of bars and restaurants due to the Covid-19 crisis. Ayuso, in opposition to the government, turned Madrid into the “party capital” of Spain with bars and restaurants serving customers as if there was no pandemic, sparking massive amounts of support from Spaniards fed up with emergency restrictions.

“We promise you two more years of freedom of governance, bringing down taxes, protecting public, private and special education. To look after our health care system and to look after all the great things that we have constructed amongst us all.

“We are not going to let you down. We are going to govern with respect and above all else, and I repeat again for the thousandth time we go forward with the flag of freedom leading us. Long live Madrid, Long live Spain,” she said.

The arrival in the Madrid arena of Pablo Iglesias electrified an already tense campaign. Then vice-president of the Spanish government, and the leader of the radical left Podemos party, saw his party was sinking in the polls. He resigned from his federal post to embark on this election to avoid a major defeat, but despite his effort, his party performed poorly.

At the same time, the Spanish Socialist Workers’ Party (PSOE), which leads the national government, saw its support plummet in Madrid. receiving only 16.85 percent of the vote, resulting in a record low of 24 seats.

Divisions remained strong during the campaign. To fight against what she called the “Communist candidate”, Ayuso swore she would not initiate a cordon sanitaire around the right-wing Vox party, making it clear that she was open to a coalition. Indeed, the 13 regional politicians of Vox were highlyl important to Ayuso, allowing her to wield power through a potential coalition. During the campaign, she refused to exclude members of the Vox party, which could now see key members enter the Madrid executive branch, a major step in the party’s meteoric rise in Spanish politics.

Vox, following the national elections in 2019, secured 3.6 million votes (18 percent) and 52 seats in the Congress of Deputies, becoming the third-largest party in the country.

With her hard right-wing campaign, Ayuso follows in the footsteps of Nicolas Sarkozy’s presidential race in 2007.

Ayuso soundly defeated the left, with the Socialists only obtaining around 24 seats. The Podemos movement obtained only ten seats, which is a stunning result for the party’s star, Pablo Iglesias, with such a poor result marking the end of the career of a politician who was one of the leaders of the left-wing movement. The Podemos dissidents who left the party and united under the Más Madrid brand are doing better with 24 seats, scoring the same result as the Socialists. As for Ciudadanos, Ines Arrimadas’ party finished last and will have no seats — dramatic loss that brings the centrists closer to what commentators are calling a “political funeral”.

The election result weakens Socialist Prime Minister Pedro Sanchez and marks a rapprochement between the parties on the right under the authority of the People’s Party. Talk of early snap national elections are now rippling through Spain. While the vaccination campaign and the distribution of European funds are expected to save Sanchez, his mandate is widely seen as coming to an end and the rest of his term is expected to be both complicated and tense.