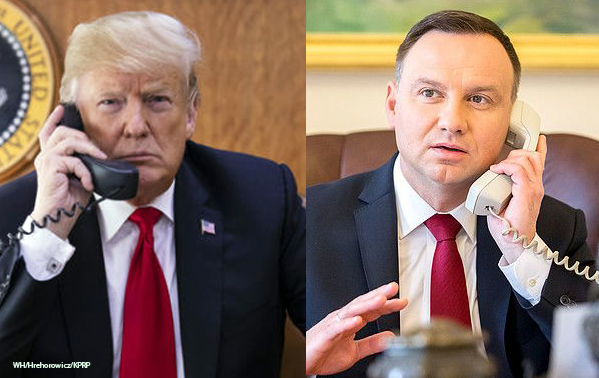 U.S. President Donald Trump thanked Poland for its decision to send doctors during his phone call with Polish President Andrzej Duda, with the two world leaders also discussing Polish-U.S. cooperation on combating the pandemic, engaging NATO in these efforts, and expanding economic cooperation to cope with the consequences of the epidemic.

The two Presidents talked for half an hour after Trump initiated the call.

According to President Duda’s chief of staff, Krzysztof Szczerski, Poland was willing to send a medical mission to Chicago.

The Polish doctors would support the health care system and also gain valuable experience in dealing with cases of the virus.

Duda, in turn, thanked Trump for the U.S. troops his country has deployed inside Poland.

Spending the morning speaking to @fema and Military relative to CoronaVirus. Also, spoke to leaders of various countries including Poland, South Korea and Bahrain. Last night had a very gold conversation with the President of Mexico on numerous topics. Border is very strong!

The chief of staff said the two presidents also discussed cooperation between Polish and U.S. research bodies on the work to develop a vaccine and a drug to fight the virus.

In addition, the leaders also talked about the U.S. supplying Poland with the most modern tests for detecting the coronavirus.

The two presidents feel that the dramatic situation that the world finds itself in will only further deepen the already close relations between the U.S. and Poland.