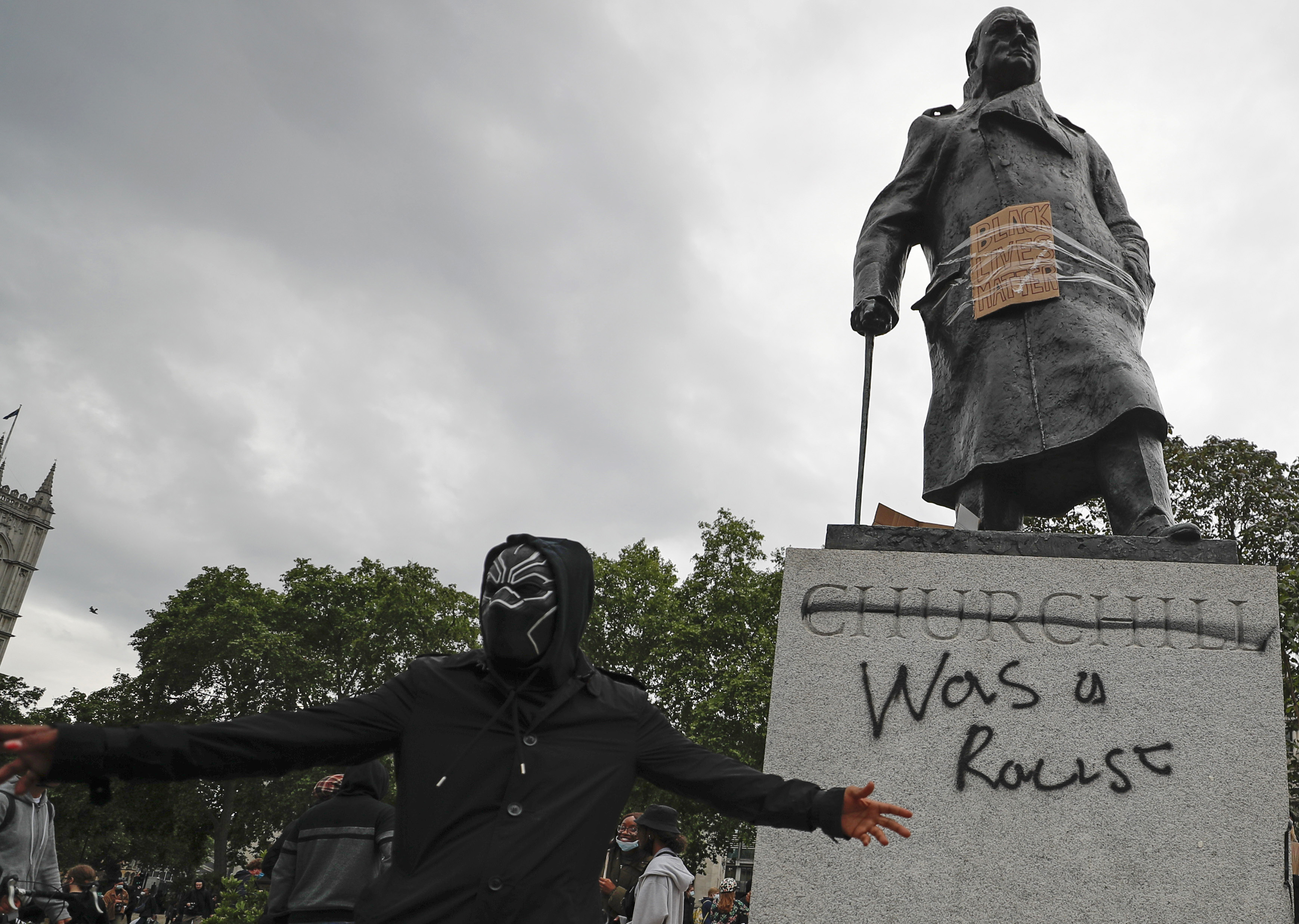 A statue of Winston Churchill was vandalized during Black Lives Matter protests in London’s Parliament Square during the weekend, with protesters spray painting the British wartime leader’s monument with a message claiming he was a “racist”.

One of the Black Lives Matter protesters, a black male who was wearing a medical mask, said he was responsible for the graffiti spoke during an interview with a BBC reporter.

“I tagged up the statue of Churchill because he’s a confirmed racist. He fought the Nazis to protect the Commonwealth from invasion – he didn’t do it for black people or for people of color or for people of anything. He did it sheerly for colonialism. People will be angry – but I’m angry that for many years we have been oppressed,” he said.

Interview with the protestor/defacer who ‘tagged’ the Churchill statue on Parliament square. pic.twitter.com/YgceMnfeqR

A number of Twitter users asked the BBC reporter to take the interview down, as it may help police identify the suspect, but so far he has refused to remove it. No arrests have yet been made, but police are continuing their investigation.

Photographs taken on the spot show policemen standing in front of the statue with neon green graffiti on it. The vandalism took place on Saturday, on the 76th anniversary of D-Day.

Protesters reportedly first defaced Churchill memorial was defaced with letters ‘ACAB’, which standards for ‘All Cops Are B*stards’, as can be seen in videos of the protests.

Photos from Sunday show a new graffiti sprayed on the memorial claiming that Churchill was a racist.

Given Churchill’s vital role in defeating Adolf Hitler and the Nazis and his contributions to Great Britain, the attack on his statue has drawn outrage from across the political spectrum.

Churchill was a racist? Just wait till you hear about the guy he beat. pic.twitter.com/tRosbrHm5t

The attack on Churchill’s statue followed violence and riots in London, in which numerous police officers were injured following protests over the death of George Floyd during his arrest in the United States.

One female officer’s horse bolted in London when it was struck with projectiles during protests, sending the officer directly into a pole at high speeds. The officer suffered a collapsed lung, a broken collarbone and shatter ribs, and will likely spend months in the hospital recuperating. The incident drew cheers from Black Lives Matter protesters.

Listen to them celebrate as they knock an officer from his horse. The radical left, by making false comparisons between the US and the UK, has unleashed hell upon innocent British officers. Our officers get up each morning to keep us all safe, @pritipatel this cannot go on here. pic.twitter.com/OtQpwhI6UN

British Health Secretary Matt Hancock begged for Brits not to join the gatherings and urged them to avoid mass demonstrations and follow the lockdown rules.

Hancock said that he was “appalled“ by the George Floyd’s death but reminded that the UK was still facing a health crisis with coronavirus was still a present threat.

“The reason that it is vital that people stick to the rules this weekend is to protect themselves and their family from this horrific disease. So please, for the safety of your loved ones, do not attend large gatherings including demonstrations of more than six people,” he urged.

WATCH: Please, this weekend, avoid large gatherings – including demonstrations – to protect your loved ones & the NHS pic.twitter.com/HrsbEMzSjD

Prime Minister Boris Johnson criticized the violence at the protests, saying, “These demonstrations have been subverted by thuggery and they are a betrayal of the cause they purport to serve. Those responsible will be held to account.”

Despite the threat of coronavirus, thousands of protesters gathered across the UK, and meetings and rallies were held in London, Manchester, Newcastle, Cardiff, and Watford following the death of Floyd on May 25 in Minneapolis. Floyd died after a police officer Derek Chauvin kneeled on his neck for almost 9 minutes with the death sparking a wave of protest in the US and now also in Europe.

Home Secretary Priti Patel agreed with him and wrote on Twitter: “Please for the safety of all of us, do not attend large gatherings – including protests – of more than six people this weekend.”

Approximately 15,000 demonstrators are believed to have gathered around Picadilly Gardens in Manchester and a similar turnout was recorded outside London’s Parliament Square.

Activists held placards and signs saying “Enough is enough“ and “Racism is a pandemic too“ as well as “Black Lives Matter“.

Protests in the US were firstly accompanied by looting, destroying shops and small businesses, and also violent attacks on police officers or business owners. Videos of these incidents quickly spread on social media.

Other statues have also been defaced in Britain and the U.S., including one of Polish-American hero Tadeusz Kościuszko in Washington D.C.

UK Black Lives Matter protesters also tipped a statue of Edward Colston into Bristol Harbor. Colston was a controversial figure due to his role in the slave trade.

Title image: Protesters gather around Winston Churchill statue in Parliament Square during the Black Lives Matter protest rally in London, Sunday, June 7, 2020, in response to the recent killing of George Floyd by police officers in Minneapolis, USA, that has led to protests in many countries and across the US. (AP Photo/Frank Augstein) 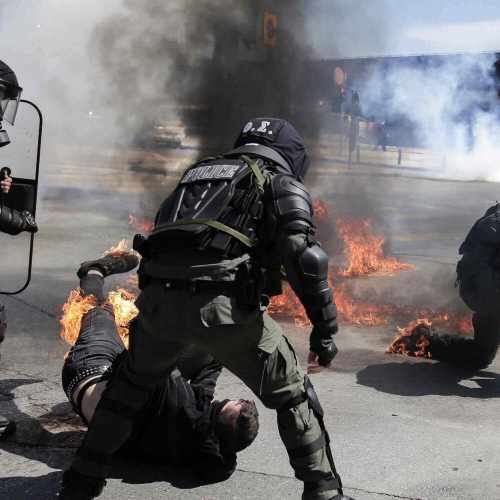