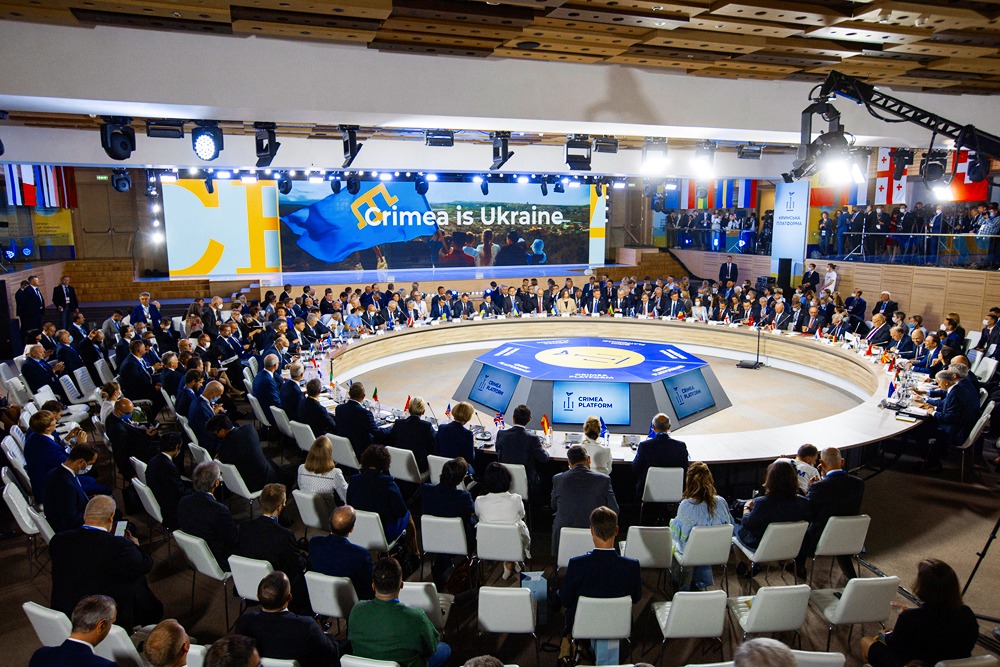 High ranking officials attend the Crimea Platform summit in Kyiv, Ukraine, Monday, Aug. 23, 2021. The Crimean Platform, an international summit called by Ukraine to build up pressure on Russia over the annexation that has been denounced as illegal by most of the world, opened in Kyiv on Monday. (Ukrainian Presidential Press Office via AP)

According to Kiev’s plans, the inaugural Crimea Platform Summit is meant to return the issue of Russian-occupied Crimea to the international debate. The representatives of all Three Seas Initiative states took part in the summit, including presidents and heads of government.

Ukrainian President Volodymyr Zelenskiy emphasized that Ukraine is aware that it cannot retake Crimea on its own. He added that the issue of the peninsula has been raised at the highest international level.

“Ukrainian Crimea had once guaranteed stability in the region and is currently, one might say, a barrel of gunpowder. A once world-famous resort is to become a military base and a stage for further expansion of Russian influence in the Black Sea region,” he said.

“Our meeting today is an opportunity to express solidarity with the Ukrainian and Tatar nation and to communicate to the world that we do not recognize the illegal occupation and illegal annexation of the Autonomous Republic of Crimea and Sevastopol by the Russian Federation,” he said. Duda underscored that “Crimea is Ukraine” and stated that Poland does not agree with any other narrative in this case.

Other Three Seas leaders spoke in the same tones. Latvian President Eglis Levits declared that Latvia will actively support the Crimea Platform and warned that the militarization of the occupied parts of Ukraine is a threat to the entire region. Lithuanian President Gitanas Nauseda said that “it is more than clear for every Lithuanian that Crimea is an integral part of the independent Ukrainian nation.” He emphasized on social media that his country will never recognize Crimea’s occupation.

Estonian President Kersti Kaljulaid pointed out that the Crimean Platform is to become one of the tools of international policy to return Ukraine’s territorial integrity.

Hungarian President Janos Ader said that Hungary firmly supports Ukraine’s sovereignty and territorial integrity. The President of the European Council Charles Michel made reassuring remarks that the EU’s position on the matter of Crimea remains unchanged: