US President Trump’s attorney Sidney Powell: ‘We’re preparing to overturn the results of the election in multiple states’ 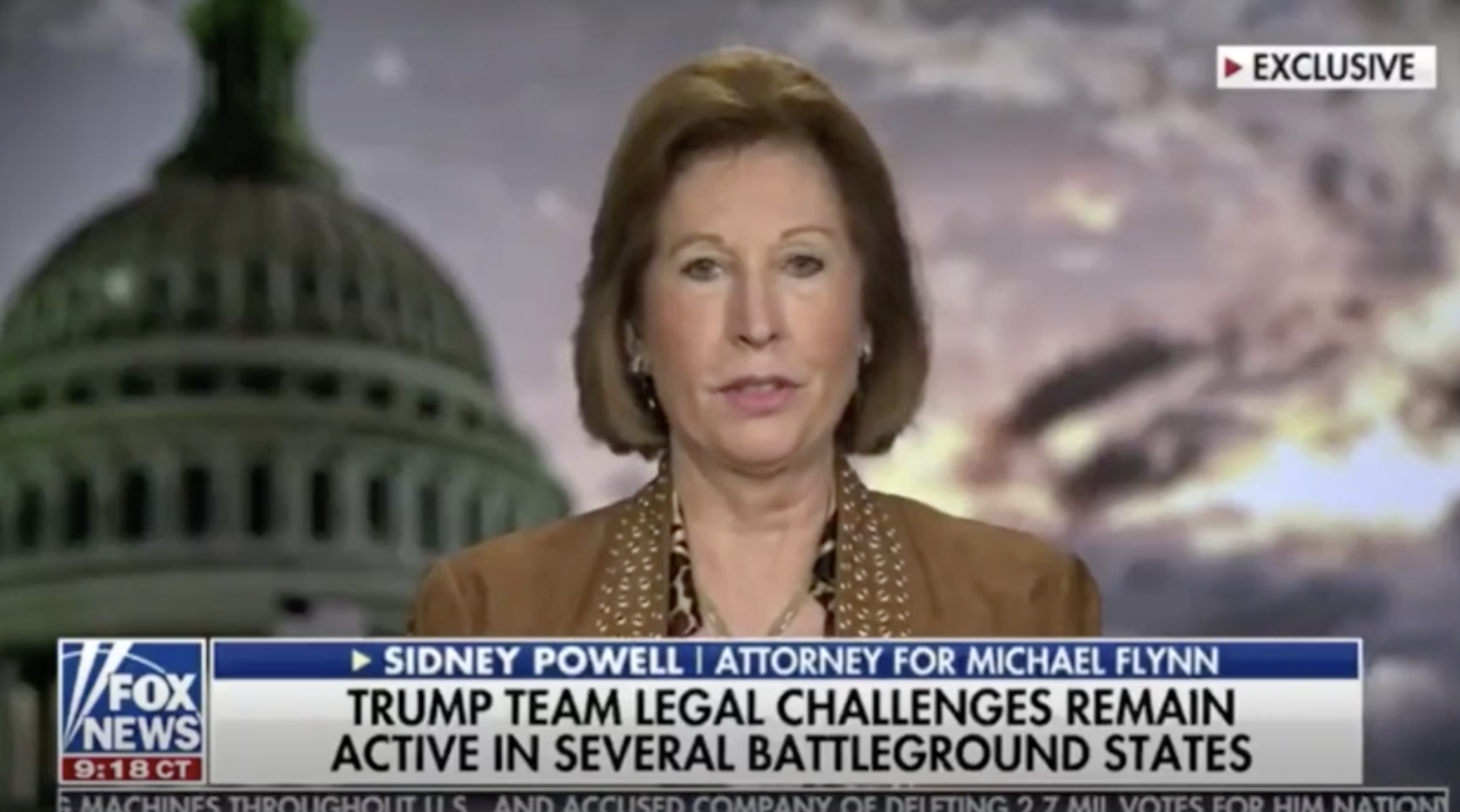 Former federal prosecutor Sidney Powell, now part of the Trump campaign’s legal team which is investigating alleged widespread election fraud, said in a Sunday interview that Trump’s legal team has an overwhelming amount of evidence which proves “massive election fraud” caused by software made by Dominion Voting Systems and Smartmatic.

During the interview on Fox News’s Sunday Morning Futures with Maria Bartiroma, Powell said: “We’re getting ready to overturn election results in multiple states. President Trump won by not just hundreds of thousands of votes, but by millions of votes that were shifted by this software that was designed expressly for that purpose.”

The former federal prosecutor also said that Peter Neffenger, a member of Joe Biden’s transition team — which Powell says is “going to be non-existent” — is also a member of the board of directors for Smartmatic, the company that committed election fraud which likely will result in the 2020 election results being overturned.

Neffenger is currently listed on Smartmatic’s website as the chairman of the board of directors.

Powell went on to say Neffenger had knowledge that Smartmatic’s software was designed to rig the outcomes of elections. While Smartmatic denies being involved in the 2020 presidential elections, the company is widely credited with providing programming code to Dominion’s voting machines.

“We have sworn witness testimony of why the software was designed. It was designed to rig elections,” Powell said. “He was fully briefed on it, he saw it happen in other countries, it was exported internationally for profit by the people that are behind Smartmatic and Dominion.”

Powell continued, saying, “They did this on purpose. It was calculated. They have done it before. We have evidence from 2016 in California. We have so much evidence, I feel like it’s coming in through a fire hose.”

“They can watch votes in real time. They can shift votes in real time. We have identified mathematically the exact algorithm they used and planned to use from the beginning to modify the votes, in this case, to make sure Biden won… And they can do anything they want with the votes. They can have the machines not read the signature… They can make the machines read and catalog only the Biden vote.”

Powell called the operation a “massive election fraud” that is “going to undo the entire election.”

When Bartiromo asked Powell whether she would be able to prove fraud in the little time that she has given that the election is supposed to be certified in early December, she replies, “First of all, I never say anything I can’t prove. Secondly, the evidence is coming in so fast, I can’t even process it all. Millions of Americans have written, I would say, by now. Definitely, hundreds of thousands have stepped forward with their different experiences of voter fraud.”

“We are particularly concerned that secretive and ‘trouble-plagued companies’ owned by private equity firms and responsible for manufacturing and maintaining voting machines and other election administration equipment, but have long skimped on security in favor of convenience, leaving voting systems across the country ‘prone to security problems’,” the Democratic lawmakers wrote in a letter to the firms last year.

On Saturday, Rudy Giuliani — former Mayor of New York City, cybersecurity adviser, and former US Associate Attorney General — who’s now a part Trump’s legal team, took to Twitter, writing, “Did you know a foreign company, DOMINION, was counting our vote in Michigan, Arizona and Georgia and other states. But it was a front for SMARTMATIC, who was really doing the computing. Look up SMARTMATIC and tweet me what you think? It will all come out.”

Did you know a foreign company,DOMINION,was counting our vote in Michigan, Arizona and Georgia and other states.

But it was a front for SMARTMATIC, who was really doing the computing.

Look up SMARTMATIC and tweet me what you think?

It will all come out.

Many believe that Dominion voting machines, along with potentially other electronic voting systems, may have switched votes from Trump to Biden. A segment recorded from CNN on election night showed exactly 19,958 votes mysteriously vanishing for Trump and then 19,958 votes were added to Biden in Pennsylvania. The vote switch can be seen in this viral video.

The vote tallies seen on CNN are from automatic feeds from Edison Research which are streamed in real time to select networks and publishers.

Users who saw the vote switch began to parse the original Edison Analytics data and find that potentially millions of votes were switched from Biden to Trump during the process, although investigations from the Trump campaign remain ongoing and Dominion denies that any votes were switched.

A new website database, Here is the Evidence, is attempting to document a trove of voter fraud allegations all in one place regarding the 2020 presidential elections.