The Charlie Hebdo Muhammad cartoons have become a symbol of freedom of expression in France, but one with potentially deadly consequences 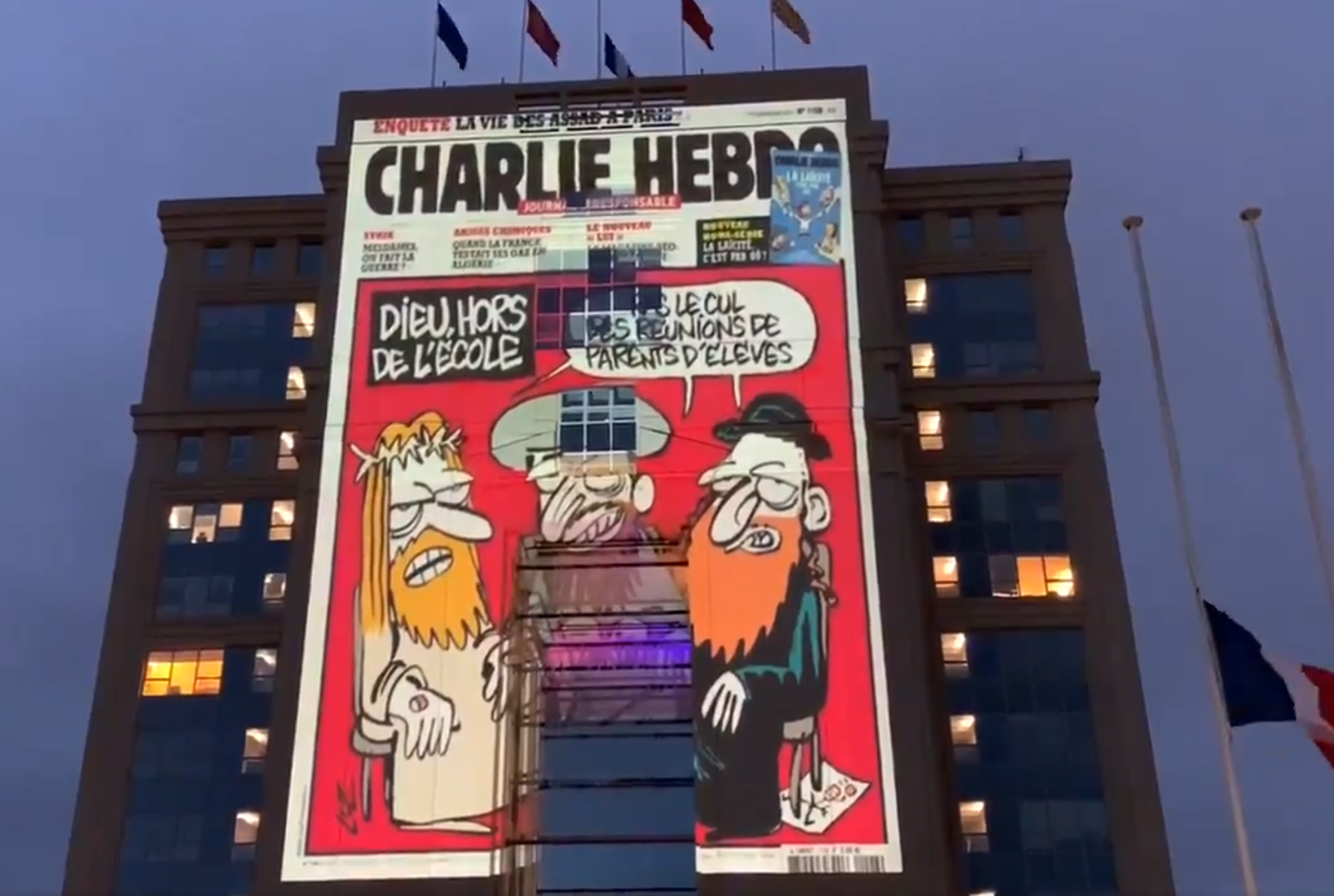 In an act of defiance against Islamic terrorism, Charlie Hebdo cartoons were projected on hotels in Toulouse and Montpellier on Wednesday evening as a part of a national tribute to Samuel Paty, a school teacher who was beheaded by Muslim immigrant terrorists after showing images of Mohammad in a class centered on freedom of expression.

The bold decision to project the Charlie Hebdo cartoons, which included caricatures of the Islamic prophet Muhammad, on the facades of the two hotels, was made by the mayor of Occitanie region, Carole Delga, Le Figaro reports.

On Tuesday, Carole Delga, in a press release announced: “Occitanie is associated with the homage of the Nation to Samuel Paty. I have decided that the caricatures of Charlie Hebdo cartoonists, some of whom were killed in the terrorist attack of 7/01/15, be projected on the facades of regional hotels in Toulouse and Montpellier.”

When speaking about her decision to show to the satirical art, the regional mayor was quoted by FranceBlue as saying: “There must be no weakness in the face of the enemies of democracy, facing those who transform religion into a weapon of war… those who have the political objective of destroying the Republic.”

The following evening between 5 p.m. and 9 p.m., heavily armed police officers guarded the two hotels so that the national tribute could take place without incident. Security in and around high schools in the region was also bolstered.

Last September, on the day that court proceedings began against the Islamist militants involved in the 2015 attack, an 18-year-old Pakistani migrant attacked two people with a meat cleaver outside of the former offices of Charlie Hebdo, Remix News reported.

French Interior Minister Gérald Darmain called September’s attack a clear “act of Islamist terrorism”, adding that it was “a new bloody attack” against the country’s journalists.

In the wake of last Friday’s attack, the Macron government, facing increasing pressure to take action against the growing threat of Islamic terrorism, announced its desire to immediately deport 231 Islamist extremists who don’t hold French citizenship, and who the secret services considers high risk individuals.

France’s interior minister has also called for the dissolution of several noteworthy Islamist groups who he described as “enemies of the Republic” who contributed to the environment which led to last week’s beheading of Samuel Paty.

French authorities also shut down the mosque where imams, along with the father of one of the students, called for revenge against Paty in a post on the mosque’s Facebook page, where they also listed the teacher’s name and address.

Days ago, documents revealed that Anzorov family — the family of the Chechen terrorist involved in the beheading of Paty — had previously applied for asylum in Poland but were rejected. Macron’s government, however, later gave the family permission to live in France for the next ten years as “refugees”, Remix News reported.