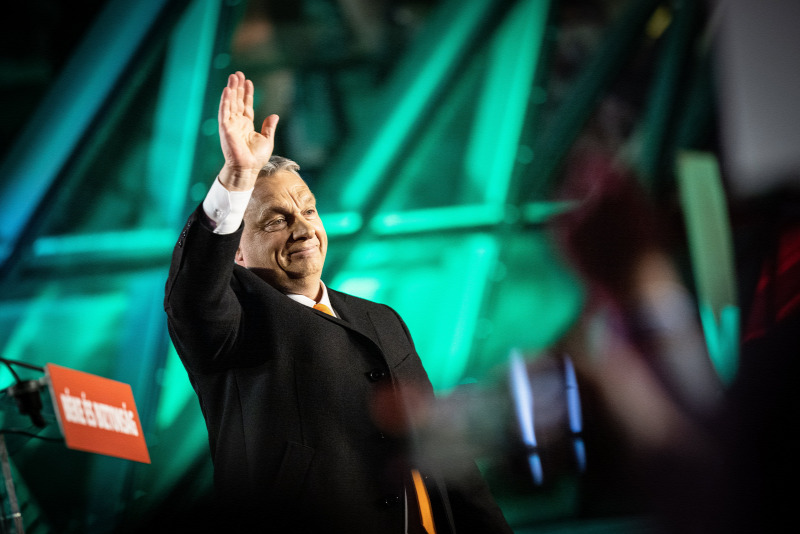 The international press loudly proclaimed that Hungarian Prime Minister Viktor Orbán would face his “toughest” election fight ever, polls pointed to his potential defeat, and the EU withheld much-needed recovery funds from Hungary in the run-up to the election. Yet, Orbán not only prevailed, but did so in a fashion that has left many in the Western media and political establishment in shock once again. Now, as the dust settles, what lessons can we take away from his historic win?

The polls were very wrong

Orbán’s crushing victory saw him win 53 percent of the vote and secure another two-thirds majority. Those results are hard to argue with. His opposition rivals, which cobbled together a “Frankenstein” coalition of mostly left-wing parties along with the far-right Jobbik, not only failed to beat Orbán, but they suffered a nearly 20-point defeat.

There have been similar polling upsets in the past, including Donald Trump’s first election victory, Brexit, and many more. While there is little doubt that polling remains our best tool for measuring public sentiment, accurate polling also faces serious challenges in the modern era, and that means the polls sometimes get it extremely wrong. There is also the possibility that in some cases, polls are used to sway public sentiment before an election even begins, with the oversampling of Democrats in some U.S. election polls raising claims of manipulation.

The media got Hungary wrong again, but that doesn’t mean they’ll change their tune

There is little doubt that Orbán’s victory has the left-liberal mainstream that dominates the EU gnashing their teeth. George Soros, the NGOs, the international press ranging from the Guardian to the New York Times, all tried to tip the scale in favor against Fidesz, but as Orbán said in his victory speech, “Every penny given to the Hungarian left was a waste of money — it seems that the Hungarian left was the worst investment of Uncle George Soros’ life. For 12 years, the opposition has just been taking money.”

Even for those on the left who hate Orbán, it might be expected that a certain grudging respect would be due. He has outlasted all his competitors not only in his own country, but is also the longest-serving leader in the entire European Union. No Western leader will admit it openly, but the democratic mandate that the Hungarian people have entrusted Orbán with is the envy of leaders across the free world. In a free and fair election, Orbán obtained his supermajority with nearly 70 percent of the country heading to the polls. In other countries, such as Germany, parties struggle for even a quarter of the vote, and shaky coalitions are needed to keep their countries running.

The reality is that Orbán’s popularity presents a huge problem for the EU and the international press, which are forced to create an alternate reality to deal with this. On one hand, these actors accuse Orbán of being “undemocratic” while on the other, there is the plain-as-day fact that he has the biggest democratic mandate of any leader in Europe. This reality infuriates them so much that they can only choose to ignore it or maliciously misrepresent it. So, they repeat their mantra of “authoritarianism” and “a lack of democracy” until they not only have convinced the Western public of this, but also themselves. The only other possibility is to acknowledge that Orbán is wildly popular relative to the likes of Olaf Scholz and Emmanuel Macron, and that is unthinkable.

Maintaining this farce may seem complicated at first, but Orbán has won resounding victories before, and in fact, he won a supermajority already in the last election. This has never given Orbán’s international or domestic critics pause, and has only led them to double down on their outlandish claims. Orbán’s positions on immigration restriction, Christianity, national populism, and preserving traditional Hungarian culture may be unpopular with the liberal class in Brussels, London and Berlin, but it was the Hungarian people who had the final say at the end of the day, and they have little doubt about who should lead them.

It is not just cultural issues and the existential threat of demographic replacement that motivates Hungarians to back Orbán either. The Hungarian government has improved the lives of Hungarians by nearly every economic and demographic metric.

Under the Fidesz rule, marriage rates have increased, the fertility rate has risen, divorce rates have fallen, and unemployment has reached record lows. In fact, there were recently more Hungarians at work than before the pandemic. Hungarians are not only working, but they are earning more, with real wages rising. The markets have also reacted to Orbán’s victory, with the Hungarian currency, the forint, trading at 367.51 forints to one euro, 8.1 percent stronger since the lows in early March.

In short, the culture war remains as important as ever, but economic well-being is essential for any political party looking to remain in power over the long-term.

Hungary remains a pivotal battleground for the future of the West

The different political camps in the West knew what was at stake with the election. Orbán is arguably the figurehead of the West’s national conservative movement and his defeat would have most certainly kicked away one of the last defenses in the way of an already very powerful liberal-left. Hungary, a small country of 10 million in the heart of Europe, is now seen as a bulwark against aggressive efforts to centralize power in Brussels, open Europe’s borders, create an EU army beholden to no national parliament, and pursue an anti-Christian, progressive agenda. That is why both liberals and conservatives ranging from powerful voices like Tucker Carlson to smaller outlets like American Greatness, have been devoting so much time and energy to the topic of Hungary’s government and yesterday’s elections. With Trump out of office and Bolsonaro facing the possibility of defeat in Brazil, Orbán is one of the last populist leaders offering an alternative to globalism and multiculturalism.

The Hungarian government faces real challenges ahead, with the ongoing war in Ukraine, rampant inflation hitting countries across the globe, and an EU bloc united in opposition to any conservative government. How Hungary responds to these challenges may very well portend whether the national conservative movement survives and flourishes, or is snuffed out by its many enemies on the global stage.