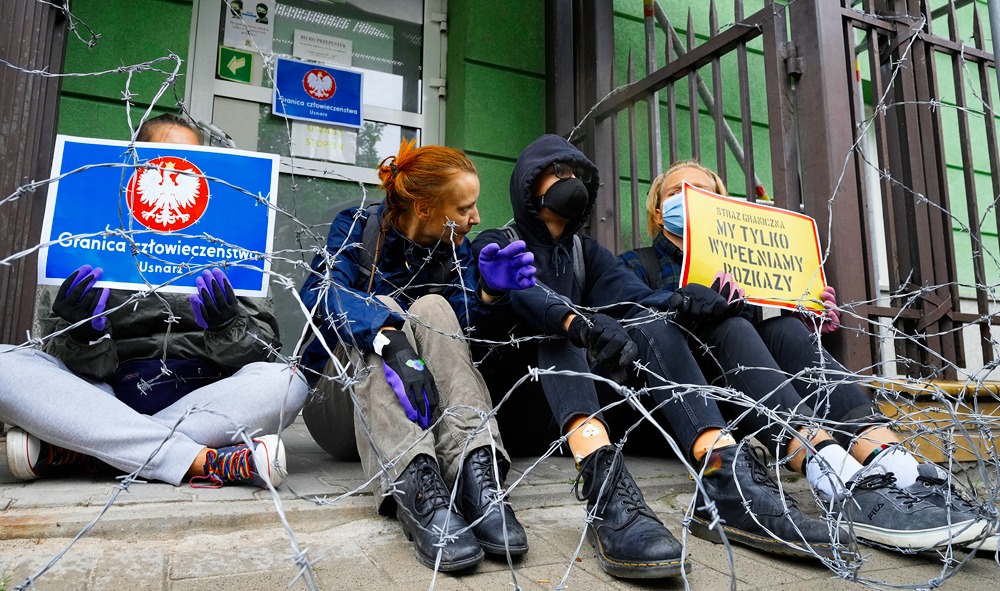 Protesters chained themselves to the fence surrounding the headquarters of Poland's Border Guards and put barbed wire on top of the fence to protest the government's refusal to let in a group of illegal migrants, in Warsaw, Poland, Monday, Aug. 23, 2021. (AP Photo/Czarek Sokolowski)
Belarus illegal migrants information war liberal media Commentary Poland

Opinion: The most important battlefront in the migration crisis may be none other than the media

The information war in Poland will not be won by looking into the crooked mirrors of liberal media but by turning directly to Polish citizens, writes Michał Karnowski

The hybrid warfare declared against Poland by the Belarusian regime, most likely backed by Moscow, is intensifying, with several fronts clearly in view.

There is the direct front on the border itself; an external, diplomatic one; and there is an internal front, too, as the Polish opposition is not able to support the Polish state even in face of a direct threat to the security of Poles.

Finally, there is the information front that connects to all the others. Some experts say this is the most important front, which just might be true.

Many worry that Poland is losing this information war because the largest commercial Polish media and those published by foreign companies for Poles are cynically or naively copying the narrative of aggressor content that is essentially handcrafted in Minsk. Without hesitation, they play with the emotions of their audiences and manipulate information provided by the government.

Leftist Western media are entering the game with a story about good Minsk, poor refugees, and an evil Polish government.

It may be true that Poland is currently at a disadvantage, but it is premature to claim that Poland has lost the information war.

Defeatism will lose any conflict, debate, and issue before it even starts. And the media plays with big cards. For years, they have been cynical players striving to achieve political goals without describing the world before us or finding the truth. They cannot be convinced otherwise, and they cannot even be bought — George Soros and other powerful oligarchs will always pay more.

The victims of the policy of destroyed borders remain anonymous in liberal media.

It must be said that Western media outlets, like the BBC, took a left-wing stance on migration years ago. They are not arbiters, either — rather, they cheer on every attempt to transfer people from any place in the world to Europe. Everywhere, they use the same shots and close-ups, a montage meant to move consciences and raise the profile of activist statements.

But they say nothing of the others who suffer — the victims of the policy of destroyed borders remain anonymous.

The pain of their children is not shown. They turn away, just like they did after the terrorist attacks in Europe and like they are doing now in the USA, as mass illegal migration has led to record high crime rates, the fall of cities, the smuggling of drugs, human trafficking and sexual abuse.

What is their proposed solution? Even more migration.

To put it simply: This war will not be won by constantly looking into the crooked mirrors of liberal media like TVN, Gazeta Wyborcza, and German media for Poles. This war can only be won by turning to the Polish citizens themselves and by seriously and consistently showing them the pressure on the border, the sources of that pressure, and the threats stemming from it.

The Polish government is doing this. Meanwhile, Poles, as proven by many surveys, understand what their country is dealing with. They know that the West has gone through this, and they are aware of the consequences.

Focusing on the narrative of radical pro-migration media will not bring about any results. It may only lead to a paralysis of will, which would only strengthen those media.

The truth must be said out aloud. Things must be called by their names. We must talk plainly, not to crooked mirrors but to Poles themselves.