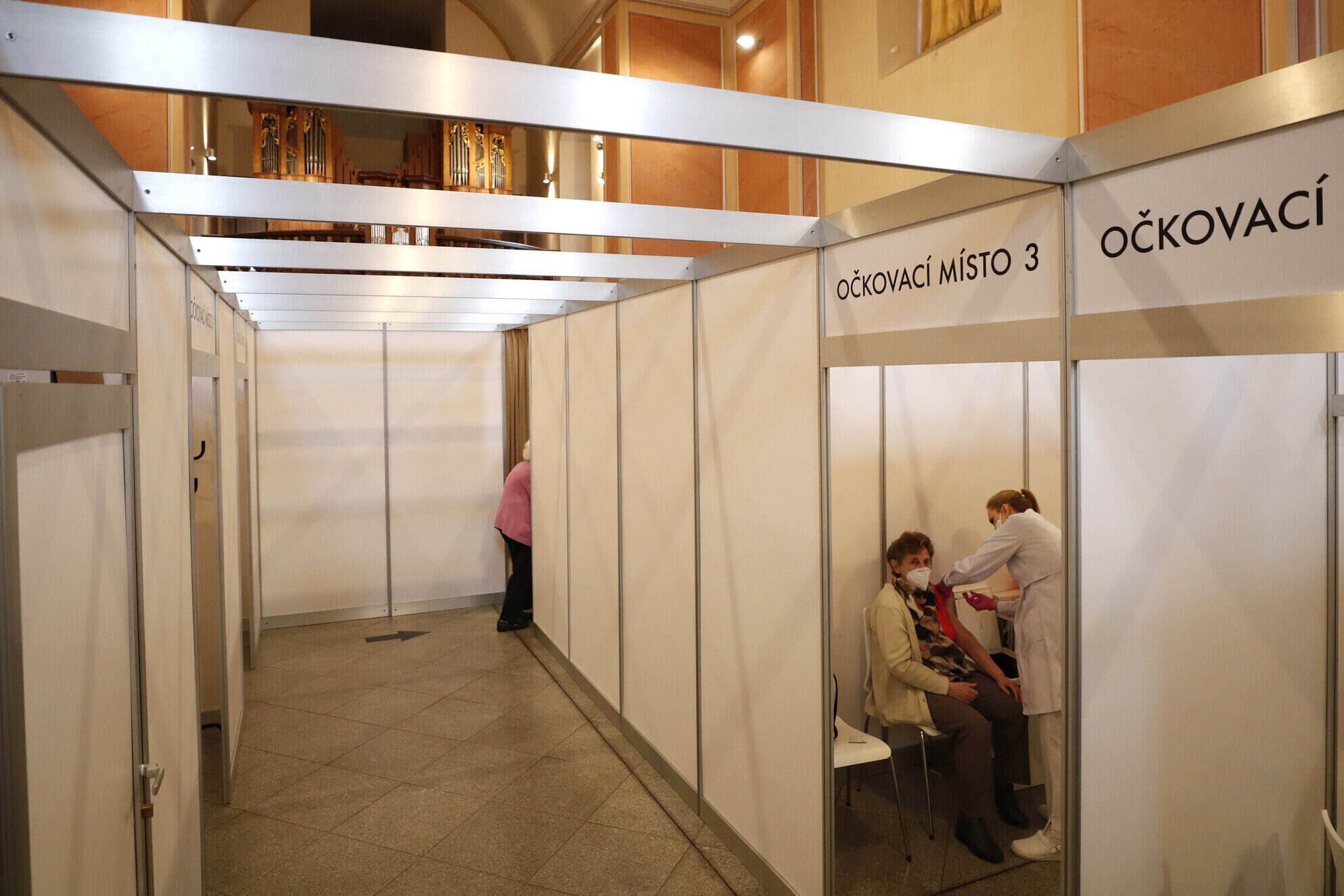 An elderly woman receives the Pfizer COVID-19 vaccine at the Church of St. Anthony of Padua in Sokolov, Czech Republic, Tuesday, March 16, 2021. As of Tuesday, the Czech Republic has administered 1,119, 663 vaccinations doses in the country of approximately 10.5 million. (AP Photo/Petr David Josek)

Abolishing the mandatory obligation to wear face masks and other measures for mass events will be possible when about 75 percent of the population is vaccinated against Covid-19, said Health Minister Adam Vojtěch. He estimates that this could be achieved by the end of autumn.

About 54 percent of people are now fully vaccinated against the COVID-19. However, according to the president of the Czech Medical Chamber, Milan Kubek, collective immunity will be achieved when vaccination reaches 85 to 90 percent.

“We can repeal the measures when we reach higher vaccination coverage. Even in the campaign we say let’s make it to at least 75 percent and then we can talk about relaxing the measures, as in other countries,“ Vojtěch said.

According to him, this could concern the relaxation of the mandatory wearing of face masks indoors and other measures at mass events as they are now still limited in capacity.

The Czech Ministry of Health originally planned to achieve collective immunity by the end of August. The original target was 70 percent of vaccinated people, but due to a more contagious delta mutation, it increased to 75 percent.

“I think we can achieve this goal during the fall,” he said. Mandatory vaccination is not currently being considered, the minister added.

Kubek does not believe that 75 percent of the population will be vaccinated by the end of autumn. In addition, he considers this goal to be insufficient.

“The original variant had such a reproductive number that collective immunity was estimated at 70 percent. However, the delta mutation requires 85 to 90 percent of people who are vaccinated or have contracted the disease,” he said. “I don’t think we have a chance to achieve collective immunity this season, but we have to try to get as many people vaccinated so that the effects of the wave that is starting now are as low as possible.”

He agreed with the chairman of the parliamentary health committee, Vlastimil Válek, that interest in vaccinations is declining.

Kubek also stressed that the vaccination needs to reach all people, especially the elderly, who live in remote corners of the country and have limited opportunity to travel to the nearest town.

“We need to send a car that goes around every tiny village. If the person doesn’t have to do anything for the vaccination, it’s the easiest way to get vaccinated,” he said. Vojtěch reacted to this by saying that there are about 40 mobile vaccination teams in the country, therefore, it is not true that such trips do not take place.

Another wave on the horizon

Tests on Saturday confirmed 205 new cases of COVID-19 in the country, the highest daily increase on a weekend since the end of May. The reproduction number stays above one, which means that the epidemic is accelerating. Data shows that 5,777,999 people are fully vaccinated, which amounts to approximately 54 percent of the total population of the Czech Republic.

According to the Ministry of Health, people can now receive the coronavirus vaccine in more than 300 places. About a fifth of them are in Prague, where people from other regions, especially from Central Bohemia, also come to be vaccinated. In the capital, both large vaccination centers in the O2 Universum hall and the Congress Center in Vyšehrad should close in September. At the end of August, vaccinations were stopped at the Brno Exhibition Center.

Title image: An elderly woman receives the Pfizer COVID-19 vaccine at the Church of St. Anthony of Padua in Sokolov, Czech Republic, Tuesday, March 16, 2021. As of Tuesday, the Czech Republic has administered 1,119, 663 vaccinations doses in the country of approximately 10.5 million. (AP Photo/Petr David Josek)