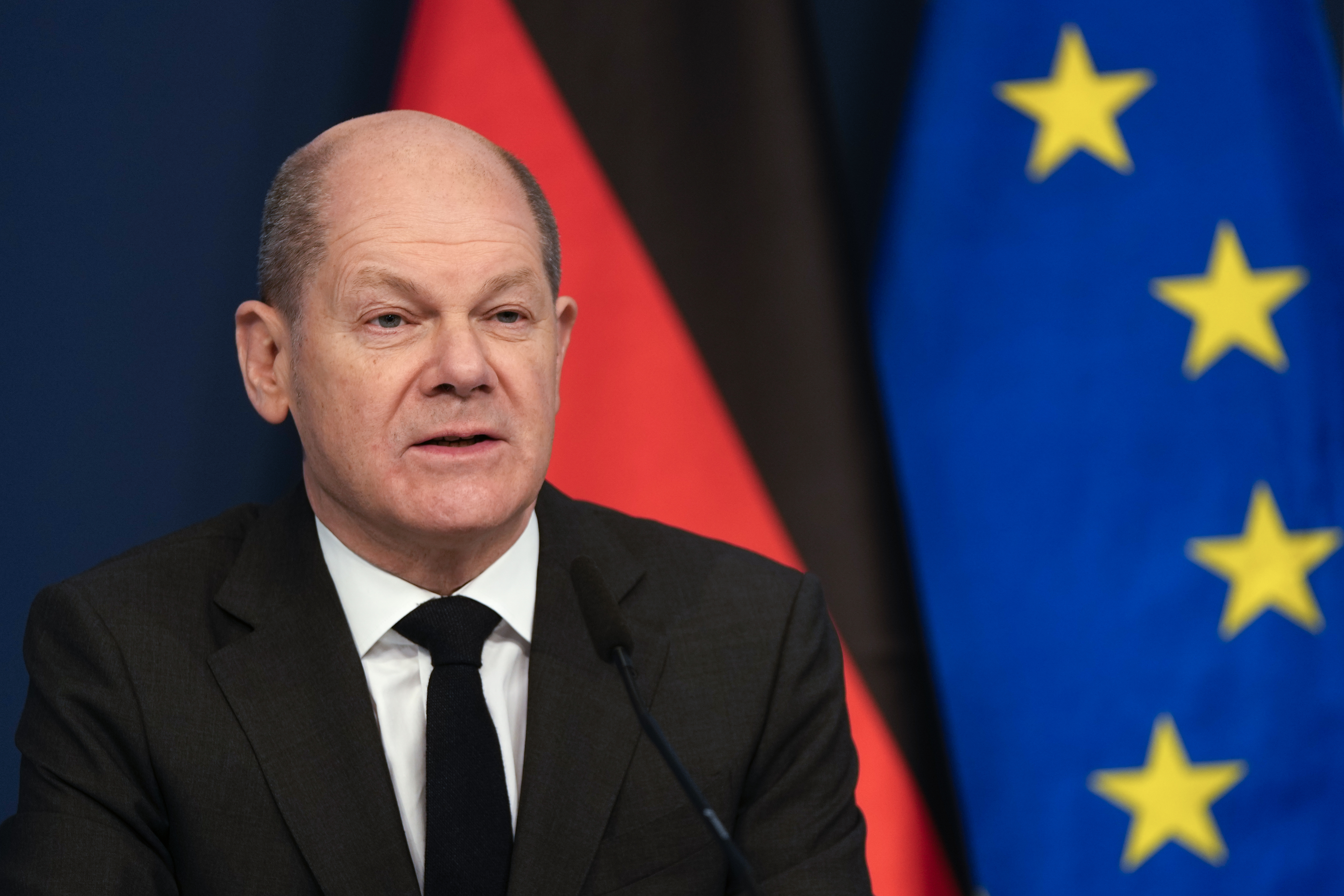 German Chancellor Olaf Scholz sits in front of a camera as he delivers his speech for the Davos Agenda 2022, at the chancellery in Berlin, Germany, Wednesday, Jan. 19, 2022. The Davos Agenda, which takes place from Jan. 17 to Jan. 21, 2022, is an online edition of the annual Davos meeting of the World Economy Forum due to the coronavirus pandemic. (AP Photo/Markus Schreiber, Pool)

The Social Democrats’ new chancellor, Olaf Scholz, may be known as the silent man of German power-politics, yet newly revealed Stasi files literally speak volumes on his behalf. The content of the former East German intelligence agency’s files is unlikely to be information that Scholz would be happy to repeat, but according to the author of the study, the chancellor’s past can explain a lot about his current, mostly foreign policy-related decisions.

German Historian Hubertus Knabe has published a study entitled “The Scholz Files,” in which he ventures out to explain why, for instance, Scholz seems to be so reluctant to make a resolute stance against a resurgent Russia, while both his coalition partners are keen on isolating and punishing Vladimir Putin’s government. Left-wing German newspapers have rather predictably cried conspiracy over the new revelations, with the Suddeutsche Zeitung, for example, suggesting that the study used catchphrases to evoke false accusations against their preferred chancellor.

However, the documents clearly depict Scholz in his youth as an unflinching self-declared Marxist and a communist sympathizer, who had friends in high places in the GDR. While a deputy president of the Young Socialists (Jusos) West-German student movement in the 1980s, his views appeared to be very close to that of the GDR’s leadership and the Kremlin.

His chief campaign target was the positioning of US nuclear missiles in Germany, originally a response to Russia’s development, and deployment of the SS-20 intermediate ballistic missiles in East Germany and Czechoslovakia. Documents show that Scholz put the responsibility for the nuclear escalation entirely on the shoulders of “U.S. aggression,” but has never criticized the presence of Russian nuclear weapons in Germany’s immediate neighborhood.

Scholz visited the GDR numerous times in the 1980s, and was willing to lend himself to the Communist Party’s broadcast propaganda, appearing to legitimize the regime on television programs as well as in communist newspapers. On one occasion, rather embarrassingly, the SPD’s communist youth-wing leader, then still sporting a long curly haircut, was made to sit during a television show under the portrait of Communist Party leader Ernst Thälmanns, who during the years of the Weimar Republic (1919-1933), described the SPD as “social fascists.”

During Scholz’s youth movement years, in the federal executive committee of the SPD, he also explained that the topic of leaving NATO is a valid point worth debating in the Jusos. Furthermore, he, along with his comrades from the East, called for the immediate withdrawal of NATO missiles from Germany. For issuing similar statements, the East German authorities praised Scholz as belonging to the most “consistent” part of the SPD, the ones most willing to cooperate with the communists.

Scholz remained at the top of the Young Socialists until 1988, and was considered as faction leader of the so called Stamokap, the wing closest to the Eastern communist bloc’s voice. In 1987, he gave a speech at a peace march organized by the Communist Youth Association in Wittenberg that was so in line with the Erich Honecker government’s position that it ended up being broadcast on East German radio. In 1988, in a joint communiqué signed by Jusos and its Eastern youth equivalent, the FDJ, Scholz’s group expressed full support for the GDR’s political demands. With this action, they underscored their willingness to cooperate with youth organizations loyal to the Soviet regime in Moscow. The document proposed that the Jusos must anchor their peace proposals in the positions of the Soviet Union, the GDR and other socialist states.

Current German newspapers discussing the above documents point out triumphantly that Scholz has not been named an agent or informant for the Stasi, but in a standard political environment revelations of an overt, explicit and voluntary cooperation with a tyrannical regime such as the one in the GDR would be considered exceptionally damaging. Statements, such as the one in which he called Western democratic parliamentarism “bourgeois,” should raise eyebrows among large parts of the German electorate.

The positions of Scholz may have certainly developed since his radical Marxist years in the 1980s, but a past cooperation with a regime that had executed and imprisoned thousands of its citizens for decades, should be a disqualifying blemish on a CV of any constitutional player in modern democracies. Scholz, however, does not even receive so much as a hint of criticism in the mainstream media, a fact that paints a bleak picture of not only of the standards of the current German press, but of the likely future conduct of the radical leftist/environmentalist government that will dominate European politics over the coming four years.