There is no EU enlargement without Serbia, Hungarian minister of foreign affairs says 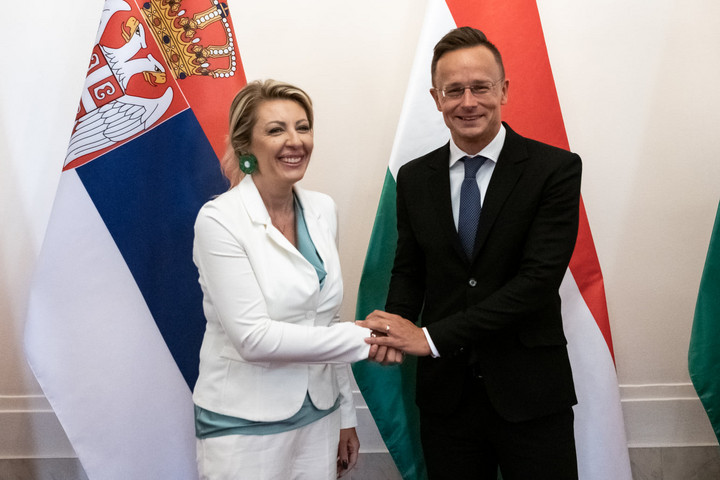 There is no strong European Union without enlargement and no enlargement without Serbia, so the country’s accession negotiations must be accelerated, Hungarian Minister of Foreign Affairs and Trade Péter Szijjártó said on Wednesday.

Szijjártó held a joint press conference with Jadranka Joksimović, Serbia’s minister for European integration, in Budapest, who, together with Croatian Foreign Minister Gordan Grlić-Radman, addressed the annual meeting of Hungarian ambassadors on the same day.

According to the ministry’s announcement, Szijjártó stated that the coronavirus pandemic had “turned our lives upside down, we had entered a new political and world economic era, and the debate on what the future of the European Union should look like and how to strengthen the community was renewed.”

Without the accession of the countries of the Western Balkans, there is no strong European Union, and Serbia is a key country in the region, so it cannot be left out of the enlargement process, Szijjártó said, adding that there is a need for peace and tranquility in the region, and that this requires a great deal of European integration.

“We respectfully ask our Western friends not to further block the enlargement process. Of course, their answer to that is they aren’t blocking it at all. This may be true at the level of words, but when it comes to tangible action, positive decisions are somehow always lagging behind,” he said, adding that empty promises indicate a lack of respect, which is unacceptable.

Szijjártó emphasized that the role and importance of the Western Balkans was now growing, as the “total failure” in Afghanistan posed a serious migration risk for Europe, with immigrants entering virtually unhindered into Turkey and only a step away from the Balkans.

He added that Hungary would continue to support Serbia in defending its southern border with a contingent of 20 police and border guards. He also said that Hungary is launching a capacity development program in the Western Balkans together with Serbia, in the framework of which the Széchenyi Program Office — a Hungarian government agency for development — will be opened in Belgrade. He also said that negotiations were underway on Serbia’s accession to the Budapest-based International Investment Bank.

In response to a question from journalists, the minister said the rescue operation in Afghanistan was nearing completion and its exact completion would be announced by the commander of the Hungarian Armed Forces.

He did say, however, that just over 500 people had been evacuated in the operation, a significant number at the request of the U.S. and Russia, but also including some Afghan-Hungarian dual nationals and a significant number of locals and family members who had worked for Hungarian missions in Afghanistan.

He pointed out, however, that Hungary does not want to participate in any additional distribution mechanism of Afghan migrants.