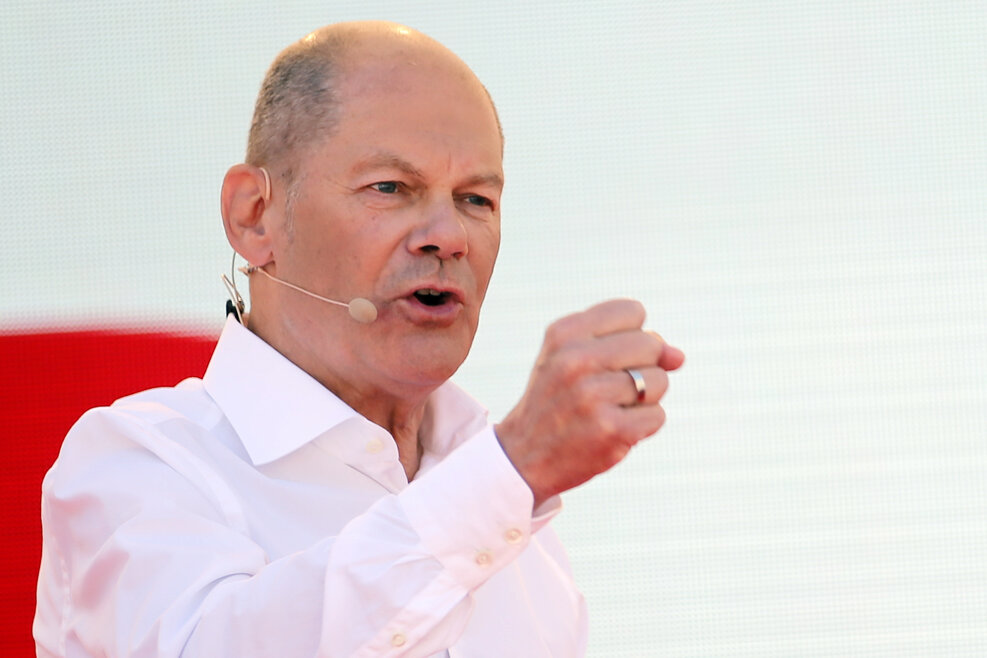 Social Democratic Chancellor candidate Olaf Scholz gestures as he speaks during an event to kick off his campaign, in Bochum, Germany, Aug. 14, 2021. (Leon Kuegeler/Pool Photo via AP)

For the first time in 15 years, the Social Democratic Party of Germany (SPD) — a rival of Angela Merkel’s left-center Christian Democratic Union (CDU) — has topped the Forsa survey. The party, led by popular Finance Minister Olaf Scholz, pushed the CDU/CSU to second place. Elections to the Bundestag will take place on Sept. 26.

According to figures released by N-TV on Tuesday, the SPD has improved by two-percentage points compared to last week’s survey and is now at 23 percent.

The CDU/CSU, whose chancellor candidate is prime minister of North Rhine-Westphalia, Armin Laschet, lost a percentage point to fall to 22 percent. The Greens are now third with 18 percent, which is also a point less than a week ago.

The Liberal FDP is now at 12 percent, and the Alternative for Germany at 10 percent. The Left can now get into the Federal Assembly with the support of 6 percent of voters.

In January this year, the CDU/CSU alliance led with 36 percent, the SPD enjoyed the support of 15 percent of voters, and the Greens had 19 percent.

The Forsa survey was conducted between Aug. 15 – Aug. 23 among 1,532 people, and also showed the growing popularity of the Social Democratic candidate for Chancellor Scholz, increased by seven-percentage points compared to June.

Exactly the opposite trajectory is the popularity of Laschet, which fell by 11-percentage points in the period. In the overall ranking of the popularity of politicians, Scholz is third and Laschet is eleventh.

Merkel advised the CDU/CSU not to be discouraged by the polls.

“We are fighting, the party is fighting,” she answered a journalist’s question during a virtual G7 summit on Tuesday.

“We will work every day to get a good result,” said the chancellor, who is leaving politics after four terms and 16 years at the helm of Germany.

For Paul Ziemiak, secretary-general of the Christian Democrats, the election poll is a “wake-up call”. He told the daily Die Welt that it was necessary to communicate clearly that in the case of a victory for the SPD, the left would rule in Germany.

Title image: Social Democratic Chancellor candidate Olaf Scholz gestures as he speaks during an event to kick off his campaign, in Bochum, Germany, Aug. 14, 2021. (Leon Kuegeler/Pool Photo via AP)