The Daily Telegraph’s Warsaw correspondent believes that by showing extraordinary aid to Ukrainians, Poles have proven that humanity can still do good 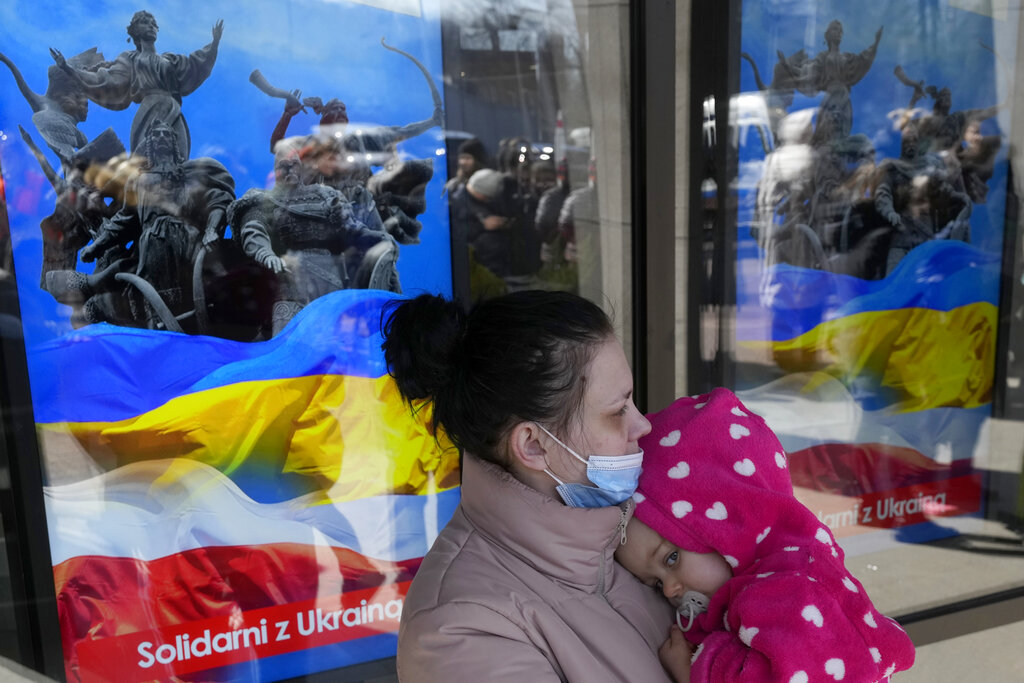 A woman from Ukraine holds a child in front of poster promoting solidarity with Ukraine near a sports hall turned refugee center in Warsaw, Poland, Friday, March 18, 2022. (AP Photo/Czarek Sokolowski)

Poland deserves to win the Nobel Peace Prize for its unrivaled compassionate response to Ukrainians fleeing their homeland in the wake of the Russian invasion, Matthew Day, a foreign correspondent for the Daily Telegraph, has claimed.

In an article for the U.K. newspaper, Day praised the humanitarian aid that has been offered by Poland since Ukrainians began crossing the border en masse last month.

“Unless you are part of it, it is almost impossible to convey the extraordinary way Poles have risen up to welcome the hundreds of thousands of Ukrainian refugees streaming into their country every week,” Day stated.

The Warsaw correspondent for the U.K. newspaper explained that the huge influx of refugees to arrive in Poland — which UNHCR data now estimates to be north of 2.1 million — is a significant number compared to the country’s 38 million population.

He also stressed that much of the humanitarian aid for Ukrainians was grassroots and organized by individual people or local groups.

Day stated that there was one symbolic way in which the world could show its gratitude and admiration for Poles: to award the Polish nation with the Nobel Peace Prize.

“It is difficult to think of a more deserving recipient in the world today and I say that as a foreign correspondent who has written countless articles over the years shining a spotlight on the many ways in which this country is far from perfect,” he noted.

The journalist underlined that while Vladimir Putin’s actions were leading to despair, “the actions of Poles and Poland was restoring hope to humanity.” He pointed to the numerous adverts and notices with offers to take in Ukrainian refugees and give them shelter which appear in every Polish city.

Day explained that the openness of Poles towards the refugees stemmed from the country’s difficult past.

“Poland is still haunted by its experiences during the Second World War and the images of people fleeing Putin’s forces bear a chilling similarity to those which the horrific suffering Poles once endured and which remain seared onto the national consciousness,” he wrote, praising the country for reminding the world that mankind can be capable of “immense compassion” in the face of “towering evil.”

“If that is not deserving of the Nobel Peace Prize, then I don’t know what is,” he concluded.