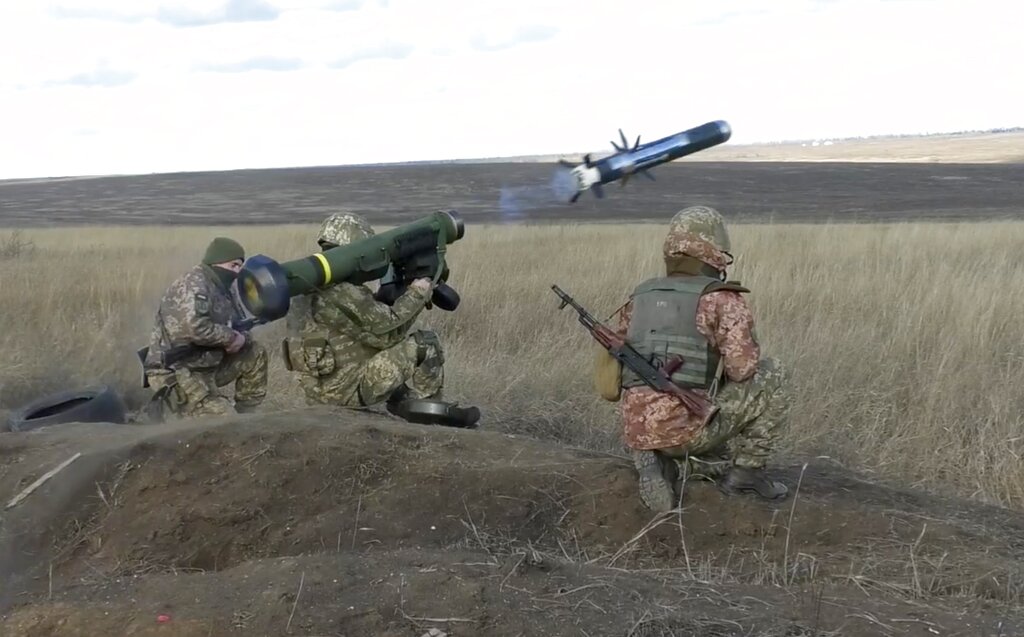 FILE - In this image taken from footage provided by the Ukrainian Defense Ministry Press Service, a Ukrainian soldiers use a launcher with US Javelin missiles during military exercises in Donetsk region, Ukraine, Wednesday, Jan. 12, 2022. The Russian invasion of Ukraine is the largest conflict that Europe has seen since World War II, with Russia conducting a multi-pronged offensive across the country. The Russian military has pummeled wide areas in Ukraine with air strikes and has conducted massive rocket and artillery bombardment resulting in massive casualties. (Ukrainian Defense Ministry Press Service via AP, File)

As part of an $800 million arms aid package to Ukraine, the United States is sending among other things Switchblade loitering drones and British-made Javelin surface-to-air missiles.

According to Pentagon spokesman John Kirby, these are 18 M777 Howitzer guns, state-of-the-art artillery pieces used until recently by the U.S. military in Afghanistan, along with 40,000 155mm shells, 10 AN anti-artillery mobile radars / TPQ36 and two AN / MPQ64 anti-aircraft radars “Sentinel.”

The Javelin missiles are effective against low-flying aircraft while the Switchblade drone is a foldable device that fits into a backpack, is launched from a tube and can loiter above the target area before crashing into it with its explosive warhead.

U.S. President Joe Biden also agreed to send 11 Soviet-made Mi-17 helicopters to the Afghan army before it surrendered to the Taliban. John Kirby said they came from U.S. military stocks, were available immediately and would be delivered “as soon as possible.”