5 George Soros quotes everyone should read

George Soros has earned his label as a billionaire, open-borders fanatic 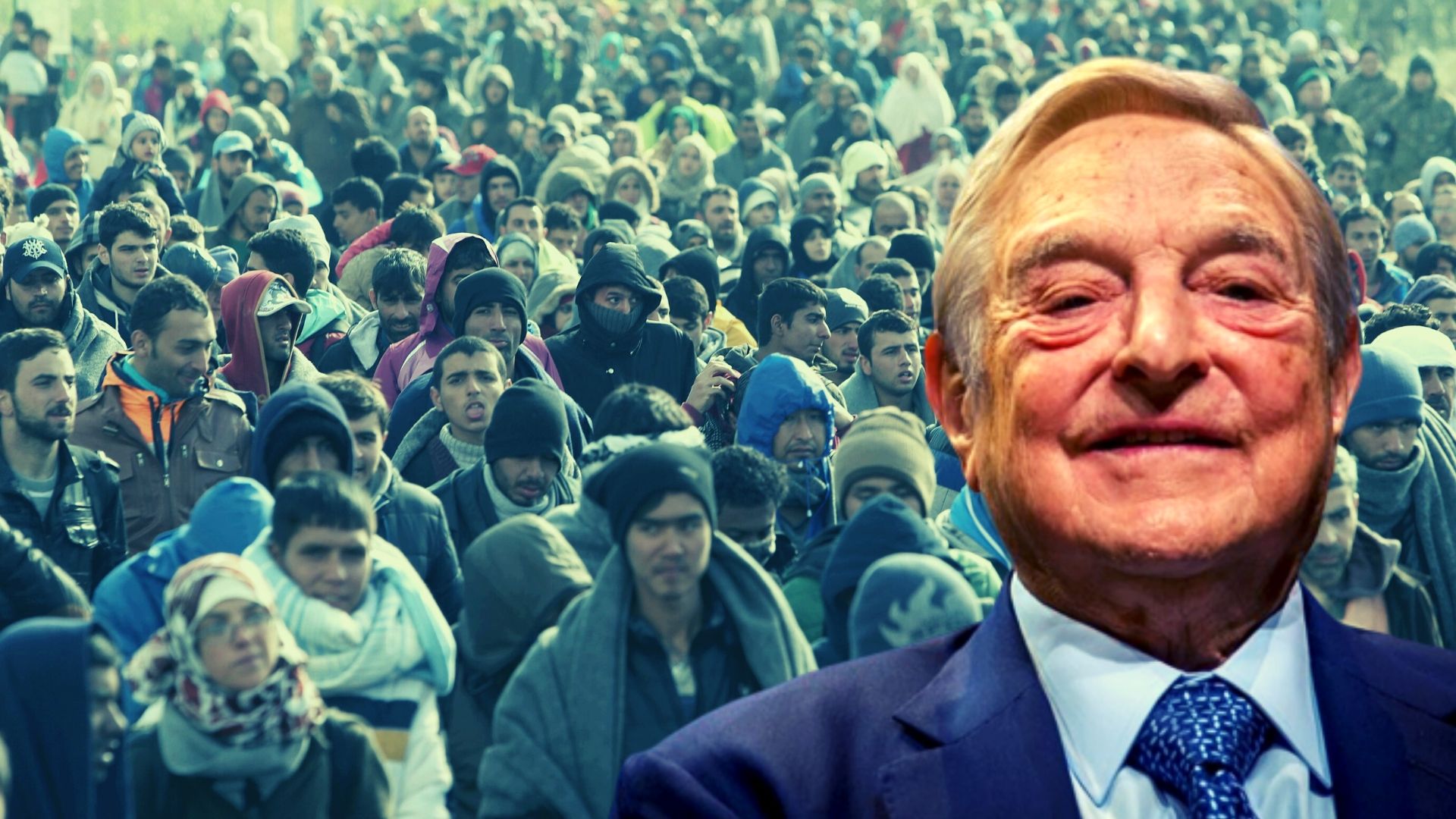 George Soros, the billionaire activist and self-described progressive globalist, has been the subject of countless glowing media profiles over the years from publications that promote liberal migration policies, anti-nationalism and anti-populism. Most of them work hard to depict Soros as a humanist with deep pockets who is beset by irrational conspiracy theories.

Despite the media’s attempt to paint criticism of Soros as nothing more than paranoia from the right, Soros has a mouth of his own and has not been afraid to use it.

These five quotes from Soros not only make his motives clear but also offer some insight into what makes him tick. On another level, they also reveal just how dishonest media coverage of Soros has been over the years.

George Soros said the above quote to Bloomberg news in response to criticisms Prime Minister Viktor Orbán directed at him over the 2015 migrant crisis.

“[Soros’s] name is perhaps the strongest example of those who support anything that weakens nation-states, they support everything that changes the traditional European lifestyle,” Orbán said on Hungarian public radio. “These activists who support immigrants inadvertently become part of this international human-smuggling network.”

Orbán said Soros is one of the primary activists supporting organizations that have promoted migrants to come to Europe and has been active in lobbying Europe to open its borders.

Papers like the Financial Times have tried to paint Orbán’s government as paranoid over its claims that Soros is promoting immigration into Europe, but Soros’s own words demonstrate he is making little effort to hide his pro-migration policies.

With Soros on record saying that the “protection of refugees is his objective and national borders is the obstacle”, critics of Soros in countries like Hungary have had little choice but to take Soros at his word.

“[Europe] has to accept at least a million asylum-seekers annually for the foreseeable future.”

Soros said the above quote in 2015, again in response to Europe’s refugee crisis. He went further as well, saying, “Adequate financing is critical. The EU should provide £10,000 (€15,000) per asylum-seeker for each of the first two years to help cover housing, healthcare, and education costs – and to make accepting refugees more appealing to member states.”

If there were any lingering doubts about Soros’s objectives when it comes to immigration, this quote is a clear indication that the fears of Orbán and Visegrad Four countries are justified, despite media assertions that Soros has no desire to massively change the demographics of the West.

After all, Soros was not only actively promoting the idea that Europe absorbs massive numbers of migrants but also advocated giving thousands of euros to each one right at the height of the 2015 crisis.

The question then arises as to how Soros believed Europe could manage to pay for all of these migrants, but he answers that with his next quote.

“The EU ought to borrow money to pay for surge funding for refugees.”

Soros proposed in a column he wrote for MarketWatch in 2015 that Europe should take on debt to pay for “surge funding” for refugees and migrants, suggesting that EU member states implement a massive €45 billion spending package. Soros even says in the article that might not be enough, and that spending more would be “justified”.

In the piece, he wrote that paying extra money for migrants upfront “would allow us to address the most dangerous consequences of the crisis — including anti-immigrant sentiment in receiving countries and despondency and marginalization among refugees — more effectively.”

He also wrote that a large influx of refugees results in panic, which can lead to “expensive and counter-productive measures, like erecting fences and walls.”

Orbán, who installed fencing along the Hungarian border, decided to instead direct “surge spending” on a border fence, which brought migration to nearly a complete halt in the country, helping to free up law enforcement resources to focus on policing within the country instead of at the border.

The move also saved Hungary from the trouble of processing, feeding, educating, and housing thousands of refugees, which would have cost taxpayers in Hungary millions of euros and likely billions over the years.

In many ways, Soros got what he asked for, just not in Hungary. The German government recently released figures highlighting just how much Germany has spent on migrants, including a record €23 billion in 2018, including rent subsidies, jobless payments and other benefits. That doesn’t include spending at the state level either, which surely amounted to billions more.

The “surge spending” Germany has directed at migrants has done little to improve integration or even help develop the cheap-labor workforce many journalists, economists and policymakers promised. A significant study released by the German Federal Office for Migration and Refugees (BAMF) less than a year ago found that 65 percent of the 7,500 migrants they interviewed were still out of work.

Although Orbán certainly could have opened Hungary’s borders and spent billions of euros housing migrants, his border security policies instead allowed him to afford initiatives like his generous family credit to help support Hungary’s own citizens.

In the MarketWatch article, Soros also pointed to countries like Jordan as an example of a country that could effectively quash anti-immigration sentiment by spending more upfront.

Years after Soros wrote his article, it appears his assessment of the situation was inaccurate. Despite Jordan spending an estimated $10 billion, the country’s goodwill towards Syrian refugees is running out. Jordan is now buckling under the weight of its refugee population and has denied tens of thousands entry into the country over security concerns, with many of those same security concerns guiding countries like Hungary and Poland in their refusal to take on more refugees.

Of course, Soros would probably argue that Jordan should have simply spent even more money than it did despite the country’s own citizens already suffering from high levels of poverty and unemployment.

Soros’s own money and criticisms have rarely been directed at countries like Saudi Arabia, which have refused to take in Muslim refugees.

“I admit that I have always harbored an exaggerated view of self-importance―to put it bluntly, I fancied myself as some kind of god or an economic reformer like Keynes or, even better, a scientist like Einstein.”

Soros has a huge ego and he is the first to admit it. On top of the above quote, he has described himself as “superhuman” and said his “goal is to become the conscience of the world.”

What better way to indulge one’s ego than manipulate countries, help bring down nationalist governments, and exert influence on what the most powerful institutions and people in the world think and do?

It is no exaggeration that Soros has been one of the most influential open border and progressive activists in history, donating billions of dollars to various causes that align with his goals.

He has also personally lobbied politicians at the highest level of the European Union.

Many billionaires have egos but Soros takes his self-love to another level when he said he fancied himself as some “kind of god”. People with his mindset tend to say exactly what they think because they are in love with their thoughts, words and viewpoints. It is perhaps why Soros has been so honest about his open borders agenda.

Soros claimed his own “globalist” liberal worldview would triumph over nationalism

The media has often attacked the right for referring to Soros as a globalist, hinting that such an idea is a dirty word or perhaps a hint that there is a vast conspiracy to paint Soros as something he is not.

Employing barely coded anti-Semitism, they have built a warped portrayal of [Soros] as the mastermind of a “globalist” movement, a left-wing radical who would undermine the established order and a proponent of diluting the white, Christian nature of their societies through immigration.

The right has been increasingly united over the last decade in seeing the hidden hand of Soros, whom they frequently describe as a “globalist”, in all manner of events….Encoding Soros as a “globalist” ties in with much older ways of talking about Jews in Europe.”

In both pieces, the word “globalist” is consistently put in quotes in order to imply that Soros is not an actual globalist and that the term is only applied to him by fringe figures on the right.

Interestingly enough, just a year later, The New York Times would remove the scare quotes from “globalist” during an interview with Soros, who casually described himself as a globalist.

In the piece, The New York Times stops short of declaring Soros a mastermind but nonetheless acknowledges that he has donated tens of millions to liberal candidates in the United States, many of them who have an open borders agenda on top of the $32 billion he donated to his liberal-leaning Open Society Foundation. The publication also states that Soros has given millions to non-profits that are not required to disclose their donors.

The only time the media isn’t praising Soros’ outsized influence, promotion of open borders and massive donations to progressive causes is when they are telling everyone that it’s crazy for anyone to think Soros is doing any of those things.