All Islamic extremist organizations will have their base in Afghanistan, warns Polish expert on terrorism

The Afghanistan debacle is a disaster for the USA’s image, says Polish expert 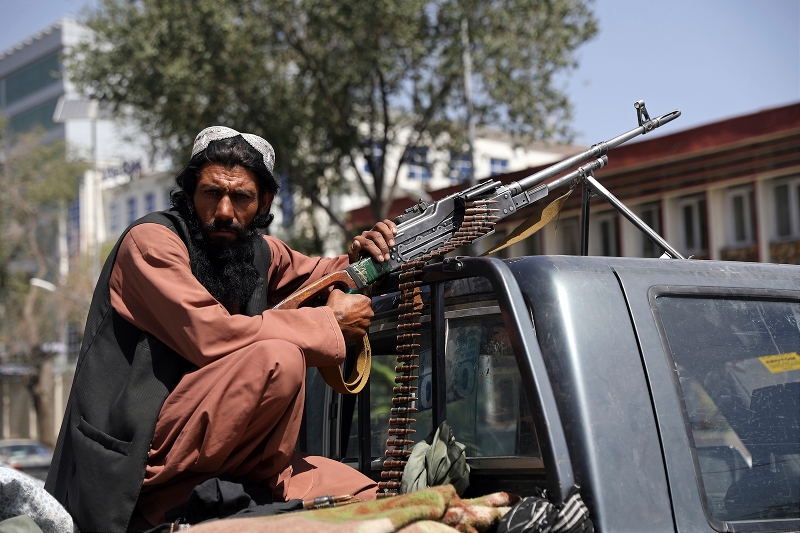 A Taliban fighter sits on the back of a vehicle with a machine gun in front of the main gate leading to the Afghan presidential palace, in Kabul, Afghanistan, Monday, Aug. 16, 2021. The U.S. military has taken over Afghanistan's airspace as it struggles to manage a chaotic evacuation after the Taliban rolled into the capital. (AP Photo/Rahmat Gul)

Kabul’s streets, which were taken over by the Taliban on Sunday, are now empty, and the shops are closed. Chaos has ensued at the airport, where countless people are attempting to flee the country. The country’s airspace has been taken over by the military, and commercial flights have been cancelled for 24 hours.

Afghanistan President Ashraf Ghani obliged himself to enter the National Unity government which was proposed by the Taliban. Moments later, he got onto a plane and fled the country. That was the moment in which the city was flung into chaos and the Taliban issued the order to enter Kabul.

Doctor Wojciech Szewko, an expert on terrorist affairs, explained the difficult situation in Afghanistan in an interview for Catholic Radio Maryja.

“The Taliban has its political agenda and is consistently carrying it out. It has learned from the mistakes made by Al Qaeda and the Islamic State which had divided and fought against their own societies instead of focusing on their number one enemies: the ‘crusaders and Zionists’. Therefore, the Taliban wants to create an inclusive government in which all political forces will be represented,” he said.

Szewko added that the new Taliban state will be an Islamic emirate that will hold back on retaliation and is granting amnesty to many potential terrorists. A few months ago, the Taliban conducted an operation in which it released Afghani soldiers and bought them bus tickets home.

He noted that the Taliban has been preparing to govern a country which will not be flung into civil war, although Afghanistan is a geographically complex country, which may lead to complications. Kabul is currently peaceful as Taliban outposts keep order.

In light of the withdrawal of the United States and the surrender of the Afghanistan military, Szewko emphasized that the situation was a disaster for the USA’s image.

“An American ally who is watching the scenes of panicked evacuation in which people are climbing onto a plane’s wheels and later falling off them, may see themselves in that same role. The Americans are unable to evacuate their own personnel and all those who cooperated with them,” he said.

The expert underscored that the situation in Afghanistan was Al Qaeda’s greatest success since September 11, 2001.

“Al-Qaeda won the war. Its leader, Ajman az-Zawahiri, will soon announce that after 20 years there will be an Islamic emirate in Afghanistan. All Islamic extremist organizations will have their base there. All of it will depend on the Taliban’s good will,” he said.

Szewko also explained that traditional Islamic punishments for crimes against other people and Allah will remain under the Taliban, such as stoning or cutting off hands. He said, however, that while attempts to convert Muslims will be punished by death, the Sunni minority will be allowed to function without any issues – this was announced over a year ago and was also declared to Iran. It is unknown how Christians will be treated.