One of the migrant teenagers getting off the plane wore a T-shirt that said “Istanbul 1453”, which is the same year Constantinople was conquered by the Ottomans 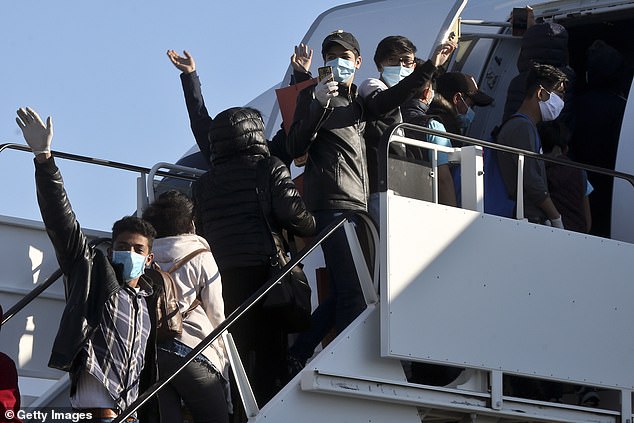 Politicians within the German Chancellor Angela Merkel’s Christian Democratic Union (CDU) party have expressed their displeasure with the recent admission of 47 migrants from Greece, according to Junge Freiheit.

Several CDU members of parliament have expressed their dissatisfaction that adolescent men arrived in Germany on a chartered flight instead of what was supposed to be a number of unaccompanied young women.

“Germany is getting stiffed by the UNCHR [United Nations High Commissioner for Refugees],” said Hessian CDU member of the Bundestag Hans-Jürgen Irmer while critiquing the agency. “Before Germany accepts more such migrants, other countries are now obliged to do so.”

According to Irmer, there are hardly any unaccompanied girls between eight and 14 years old on the Greek islands.

The federal government announced in mid-March that it would fly minors from Greece to Germany and a handful of other EU countries. It was supposed to be about children who were seriously ill or unaccompanied and younger than 14. Irmer said that the proposal at the time was to send Germany mostly girls.

A group of 47 migrants landed in Hanover on Saturday, but only four girls were among the 47 children and adolescents. One of the migrant teenagers getting off the plane wore a T-shirt that said “Istanbul 1453”, which is the same year Constantinople was conquered by the Ottomans.

Migrants were also previously brought to Luxembourg where one of them was spotted wearing an “ACAB” T-shirt, which stands for “All Cops Are Bastards”.

According to Irmer, such T-shirts are “more than irritating.”

The CDU politician is now demanding that if further admissions of migrants are made, German officials from the Federal Office for Migration and Refugees would have to make the selection on site, which has not been the case up until now.

“Now is the end,” emphasized Irmer.“I personally advocate that there is a medical age determination before alleged young people come to Germany.

In addition, the admitted must sign that they are really alone and unaccompanied, so that they contact or meet up with other family members” once they arrive.

There have also been concerns in the past that migrants have lied about their age in order to facilitate entry into Europe. For example, an incredible 84 percent of “child migrants” who were tested by Swedish government were actually adults aged 18 or older, according to a report from the BBC.

A number of German politicians have voiced concern over accepting migrants, including other members of the CDU.