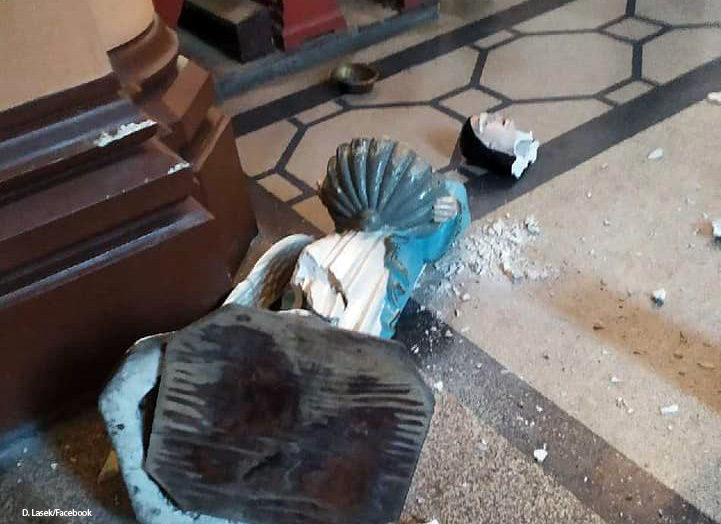 Acts of hatred towards the Catholic Church, Catholics and anything associated with Catholicism are increasing throughout the world, including in Poland.

This time, the Salesian Church in Przemyśl, located in southeast Poland, was the victim of an act of vandalism that occurred right in the middle of mass.

A man attending church, Dariusz Lasek, described the incident on his Facebook account. According to him, a young man entered the church during the mass and destroyed an antique statue of an angel.

“What is happening in the minds of people who are capable of such acts that attack Catholics and their values? Where does this level of hatred and aggression come from? Is this some demonic possession? Who is encouraging this hatred among people toward Catholicism? Lord forgive them, for they know not what they are doing,” he wrote in his post.

This is just one of many acts of vandalism directed at Catholics in Poland.

In 2019, 64 such cases were reported in Poland. And according to preliminary data from the first half of 2020, there will be many more this year. In general, Europe has seen a startling growth in anti-Christian attacks, with a record amount recorded in 2019. Most of these attacks occur in countries in Western Europe, including France and Germany, but Poland has also seen rising numbers.

Despite the heinous act, many Catholics who commented below Lasek’s post remained calm and followed the teachings of the Catholic Church. Instead of insulting the aggressors, they declared that they were praying for them to find their way to the light.

“No forgiveness, only jail for such hooligans,” one wrote.

“People are seeing this yet they do not react. What’s going on?” another pointed out.

According to Catholic radio station Radio Maryja, the regional prosecutor’s office has initiated an investigation concerning the vandal. Office spokeswoman Hanna Biernat-Łożańska said that the man, 32-year-old Arthur L., was detained several minutes after the incident. He was under the influence of alcohol during the entire encounter and may face up to five years in prison.