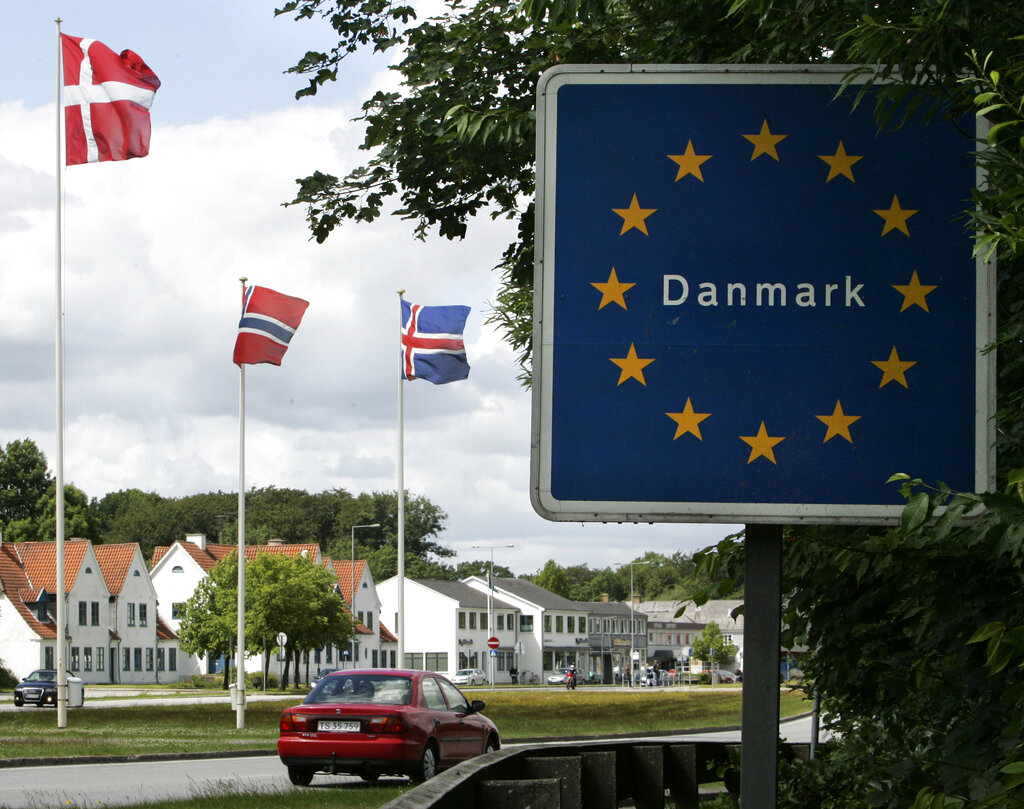 In this photo taken Friday, June 24, 2011, a car crosses the German-Danish border at Krusaa, Denmark. An inattentive driver could easily miss the flags and road signs that mark the border with Germany on the road leading into the small Danish town of Krusaa. Now Denmark is preparing to take a small, but symbolic step away from the vision of a borderless Europe.  On Friday, July 1, 2011 Danish lawmakers will vote on a plan to re-establish permanent customs checkpoints in Krusaa and other border crossings. (AP Photo/Heribert Proepper)

Under an amendment to the law passed in June, those wishing to immigrate to Denmark are required to wait outside the country for the asylum procedure to end. The amendment also allows Denmark to relocate immigrants who have already entered Danish territory to a non-European country for the same purpose, and if the Danish authorities decide that the migrant cannot be admitted to the Nordic country, he or she must also leave the “host” country.

However, Danish law also states that a residence permit already issued must be revoked if the conditions of the permit no longer apply, for example because conditions in the asylum seeker’s home country have improved. This passage is now being sharply attacked by NGOs, as Denmark has created an opportunity for itself to review the status of those with temporary permits coming to the country.

In the case of Syrian nationals from the Damascus region, the authorities of the Scandinavian country concluded that the general conditions in the areas concerned were no longer so extreme as to justify an extension of their stay in Denmark. In other words, Syrians who have arrived in the country must return to their homeland.

Guernica 37, a London-based organization, named for the infamous air bombing during the Spanish Civil War, is taking Denmark to the European Court of Human Rights (ECtHR) over the cases of the Syrians, as they say neither the U.N. nor any other European country recognizes the Damascus region as safe.

Although the organization acknowledges that the situation in the region is steadily improving, it also argues that those returning to Syria face persecution and political reckoning at home. Danish regulations are also being attacked because they fear that Danish immigration policy will set a precedent for other European states.

Not much is known about the background of the London-based organization, but according to their website it seems to have a presence in several countries and specialize in cases similar to the Danish ones.

Guernica 37 lawyers and more than 150 Danish law firms are working on the litigation, which means that
an entire industry has developed around defending migrants in Denmark from repatriation.

The Danish Social Democratic leadership seems to be determined to follow a stricter immigration policy, which also means that there will be extreme pressure on the government in the coming period from NGOs, lawyers, and international organizations.

While Guernica 37 hopes to reach an agreement with the government on Syrian citizens, there is little chance of this in the current political climate, as both the left-wing ruling party and the opposition Danish People’s Party clearly represent anti-immigration policies.