‘We have space’: German politicians and activists call for more migrants 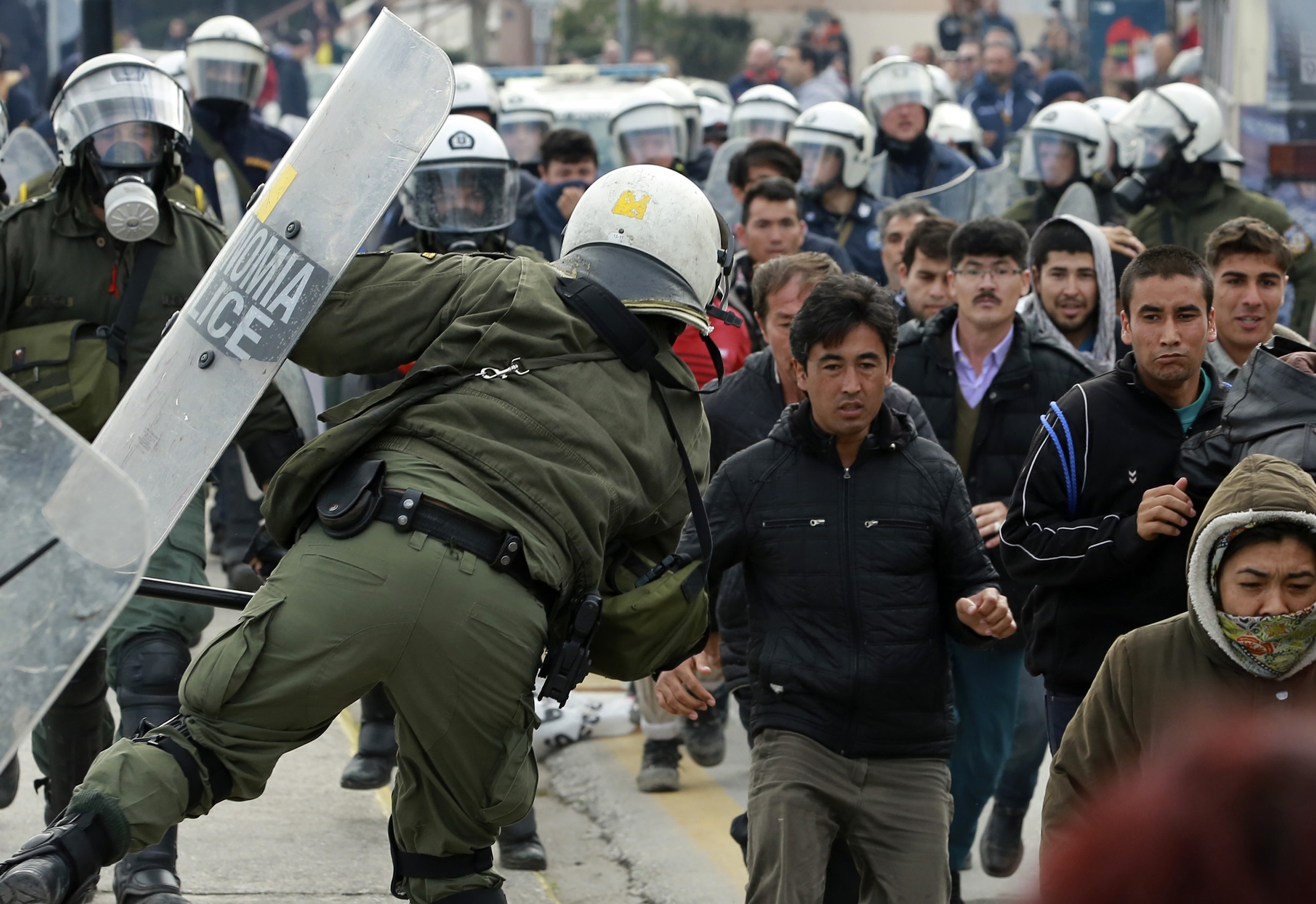 German politicians, artists, journalists, and asylum lobbyists, under the mottos “Refugees Welcome” and “We have space”, are using the crisis at the Greek-Turkish border to demand even more migrants for Germany and Europe.

Despite the social and political upheaval wrought by the 2015 migrant crisis, many of these figures say that a repeat of Germany’s Chancellor Angela Merkel’s open borders policy at the time is necessary, and that Germany has “enough space” to accept millions more, according to Junge Freiheit.

Many of the activists are using the hashtag #WirHabenPlatz, which translates to “We have space”, to spread their message on Twitter, with a broad range of figures promoting a repeat of 2015 when over one million migrants entered Germany.

Left-wing MP Niema Movassat wrote on the social media platform, “I am very much in favor of repeating 2015 that we open the gates wide to people in need. This time there is enough space in refugee centers. Many municipalities have agreed to accept people. It is THE commandment of humanity! #WirHabenPlatz.”

Ulrich Schulte from the taz, one of the Germany’s most prominent leftist newspaper, also shares the opinion that the country has coped well with the influx of refugees in 2015, writing, “The country is doing brilliantly, many people have been helped.”

As a result, he believes the country should still be accepting thousands of migrants from Turkey and elsewhere.

Calls for migrants quotas for both Germany and beyond

Some have even gone further and want to literally “accept everyone”.

Mely Kiyak, a noted author and journalist, writes for Die Zeit under the headline, “Everyone in!”, saying that “there can only be one goal. The goal is everyone”.

“Thank you for being there! We urgently need to add quotas. Tens of [German] municipalities are ready.”

She further stated that in addition to Germany, that “contingents of refugees should be distributed as quickly as possible in the EU to carry out the asylum procedures there,” She further warned: “If not everyone joins, some have to go ahead anyway and get financial help. Germany should proactively reactivate its own refugee accommodation capacities.”

Hungary, Poland, the Czech Republic, and Slovakia have been adamantly opposed to migration quotas, highlighting the challenge the EU would face if it pursued the Green Party leader’s proposal.

Other Green Party leaders chimed in with support for more migrants in Europe and Germany, with Michael Kellner writing that Germany should once again take the lead role on migrants, writing on Twitter:

“If the #EU wants to remain committed to the European idea, then # solidarity is needed. Refugees on the Greek islands have to be evacuated. Germany should go ahead and also accept refugees from the European external borders. #Lesbos #Greece.”

Green Party youth leaders, such as Tom Dzienus, are calling for direct ferries to Africa to transport migrants to Europe instead of using border security.

“I can’t say it enough, but especially now: Ferries instead of #Frontex! #Greece #RefugeesWelcome,” he wrote.

Such proposals are hardly new from the Germany’s Green Party, with tparty taking the position in January that Germany should accept about 150 million undocumented climate refugees.

It is not only Germany’s Green Party calling for more migrants. In Hamburg, Senator of the Interior Andy Grote, of the Social Democrats (SPD), wrote that, “Hamburg is ready to accept underage refugees and families from Greece… The EU and the federal government have a responsibility to create the conditions for this now.”

A number of other SPD mayors joined his call, with the mayor of Düsseldorf, Thomas Geisel (SPD), saying he wants to take in more migrants from Turkey and that his city can accommodate 8,500 refugees.

“We are a civilized city,” Geisel said. One has to “accept people with dignity”.

SPD Mayor Michael Schubert of Potsdam also agreed, saying that, “There’s still room.” He called for 500 unaccompanied children to be accepted in Potsdam in a video he posted from a migrant camp.

‘This is not my Europe’

A number of activist and lobby organizations also took to Twitter to goad Germany into accepting more migrants.

“The European approach in #Greece is inhumane. In a world in which the industrialized countries Forcing more and more people to flee as a result of the #ClimateCrisis, we need clear compliance with fundamental rights.”

The migrant lobby organization Pro Asyl also wrote, “Right-wing mobs beat up journalists and helpers on the Greek islands and do not let refugees ashore. The Greek government has granted them. And #VonDerLeyen thanks Greece as a “shield of Europe”. What else can you say? #NotOurEurope.”

Even journalists from networks publically funded by German taxpayers were open about sharing their pro-migrant opinions on Germany, with ARD journalist Gábor Halász saying, “This is not my Europe” over Europe’s response to the migrant crisis in Greece. He is the same journalist who wrote in 2015, “I must honestly say: if we start to apologize for showing a friendly face in emergency situations – then this is not my country.”

Der Spiegel jounlist Nils Minkmar doesn’t understand why the migrants who are pushing to Europe from the border area should not all be brought to Germany. He believes Germany needs more migrants despite the country already reporting a record number of foreigners in 2019.

“Germany needs people. We are desperately recruiting… We should be happy that someone like this would come,” Minkmar wrote on Twitter, where he posted a video of a 22-year-old Afghan migrant discussing why he wants to come Europe.

Author Mohamed Amjahid, who is a fellow at the Thomas Mann House, goes a step further. He would like all of Africa to come to Europe right away.

“I would like for ALL OF AFRICA to actually come to Europe and have a big party. That would be very nice,” he wrote.

Many of those calling for more migrants make no mention of their financial, social and political impact on Germany.

Germany has struggled with a large range of integration issues regarding the influx of migrants. The German government recently released figures highlighting just how much Germany has spent on migrants, including a record €23 billion in 2018, including rent subsidies, jobless payments and other benefits.

Cities have also been on the hook for additional billions, with Junge Freiheit reporting that Hamburg has spent €5.35 billion on migrants between 2015 and 2019.

In terms of workforce integration, a significant study released by German Federal Office for Migration and Refugees (BAMF) about a year ago found that 65 percent of the 7,500 migrants they interviewed were still out of work.

Gang rapes and other serious crimes have also plagued Germany since the 2015 crisis, most notably the mass sexual assault of 1,200 women by men of “North African or Arab appearance” that occurred during the 2015/2016 New Year’s in Cologne, an event that Germany is still reeling from even years later.

Title image: Riot police scuffle with migrants during a protest in Mytilene port on the northeastern Aegean island of Lesbos, Greece, on Tuesday, Feb. 4, 2020. Asylum seekers have demonstrated for a second day on the Greek island of Lesbos amid rising tension, protesting increasingly dire living conditions in and around the island’s massively overcrowded migrant camp and delays in Greece’s asylum process. (Manolis Lagoutaris/InTime News via AP)