German Social Democrats intent on forming a government this year

The Social Democrats have intensified preliminary talks with their likely future coalition partners, the Greens and the Liberal Free Democrats 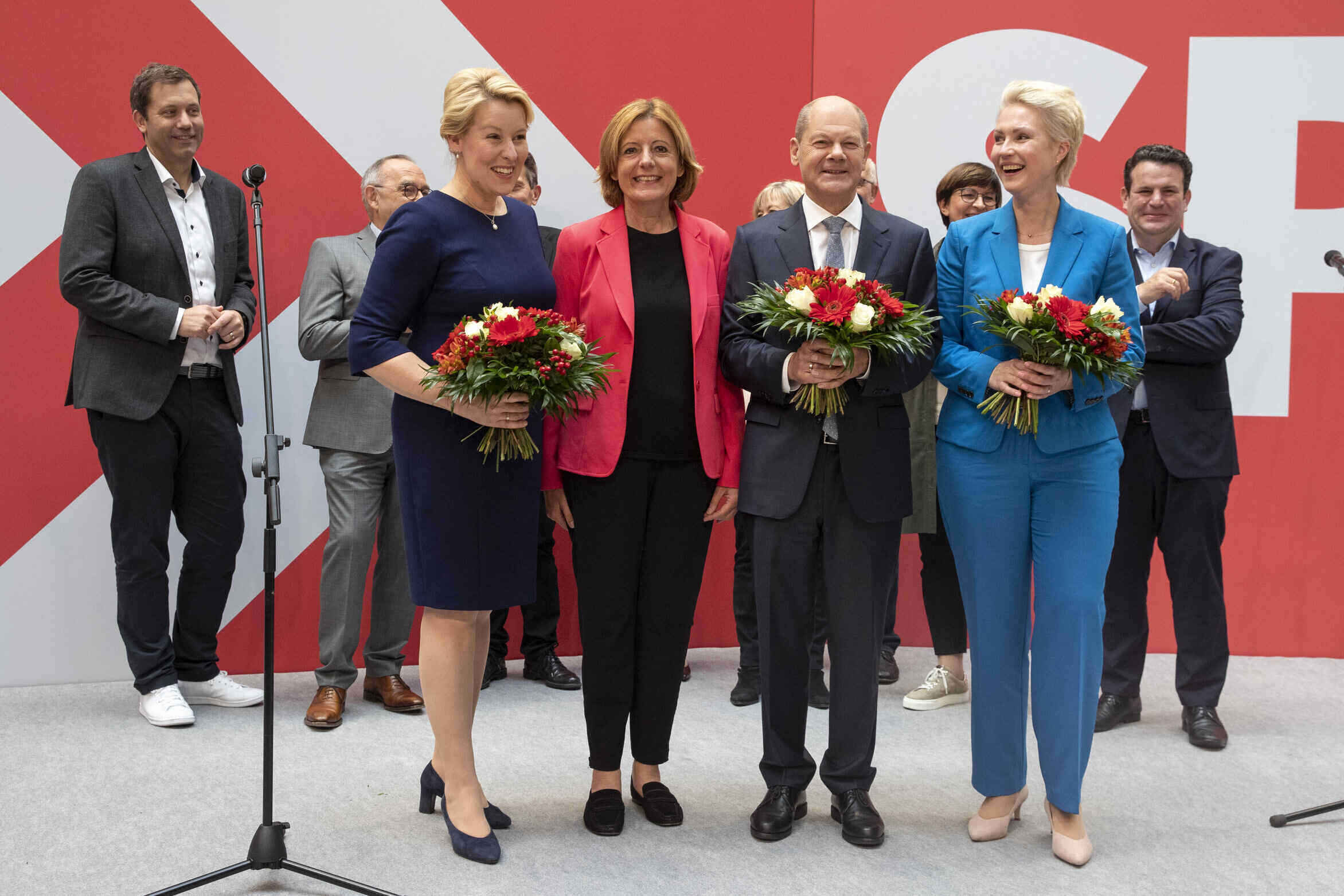 Front from left, Franziska Giffey, top candidate of the SPD for Mayor of the German city of Berlin, Malu Dreyer, governor of the German state of Rhineland-Palatinate, Olaf Scholz, top candidate for chancellor of the Social Democratic Party (SPD), and Manuela Schwesig, member of the SPD and governor of the German state of Mecklenburg-Western Pomerania, pose after a press statement at the party's headquarter in Berlin, Germany, Monday, Sept. 27, 2021. The center-left Social Democrats have won the biggest share of the vote in Germany's national election. They narrowly beat outgoing Chancellor Angela Merkel's center-right Union bloc in a closely fought race that will determine who succeeds the long-time leader at the helm of Europe's biggest economy. (AP Photo/Lisa Leunter)

The German Social Democrats (SPD) believe that the country will have a new government this year, according to party deputy chairman Kevin Kühnert, who told this to the ARD TV station. The Social Democrats, meanwhile, have intensified preliminary talks with their likely future coalition partners, the Greens and the Liberal Free Democrats (FDP).

In the September parliamentary elections, the SPD narrowly defeated the conservative CDU/CSU union and in recent days began negotiations with a pair of smaller parties, which finished in third and fourth place, on future government cooperation.

SPD Vice President Kühnert expressed the hope that the so-called traffic light coalition, described by the typical colors for the negotiating trio of parties, would be formed later this year. “I very much expect this to happen,” Kühnert said, adding, “The negotiations started well, with great confidence.”

Unlike many other countries in Europe, Germany is not entrusted with the formation of government by the head of state, as the parties themselves must first agree on the form of government. So far in Germany, the government is serving a grand coalition of the CDU/CSU and the SPD, led by Christian Democrat Chancellor Angela Merkel, who has held office for 16 years and is no longer running for office.

According to the DPA agency, the SPD, Greens, and FDP negotiators have set aside an entire day to negotiate future government cooperation. On Friday, the parties want to evaluate the courtship and possibly decide to start the coalition talks.

The Christian Democratic Union (CDU) announced that it wants to change its entire leadership early next year. The party, which fell below 30 percent for the first time since 1949 in the last election, cannot return to normal work without drawing conclusions from the result, CDU Secretary-General Paul Ziemiak emphasized at a press conference today.

The party’s leader and its candidate for chancellor, Armin Laschet, announced on October 7 that he wanted to resolve the issue of the CDU leader at the next party congress.

Leadership changes also await the Alternative for Germany (AfD), which weakened slightly during parliamentary elections. AfD Co-Chair Jörg Meuthen has announced that he will step down from the leadership and will no longer run in the December presidency. Meuthen, 60, is considered a moderate face of AfD and has recently had very strained relations with the more radical Co-Chair Tin Chrupalla and AfD Co-Chair Alice Weidel. “It’s a personal decision of Jörg Meuthen,” Chrupalla said.