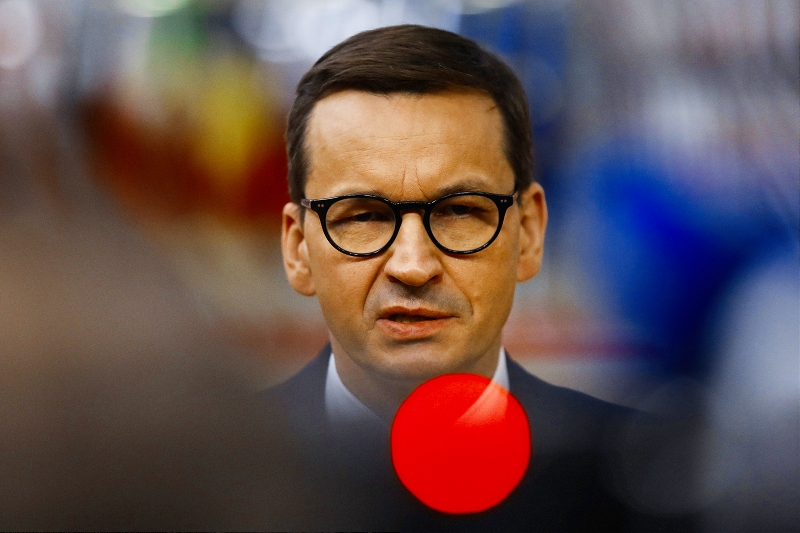 FILE - In this Monday, May 24, 2021 file photo, Poland's Prime Minister Mateusz Morawiecki speaks with the media as he arrives for an EU summit in Brussels. The European Union's top court ruled Thursday, July 15, 2021 that Poland's way of disciplining judges is contrary to EU law, further acerbating relations between the bloc and its increasingly recalcitrant member states. (Olivier Hoslet, Pool Photo via AP, File)

During a recent meeting, Prime Minister Mateusz Morawiecki was asked whether he thought it was worth risking a so-called “Polexit” over the Polish Supreme Court Disciplinary Chamber’s functioning.

Morawiecki explained that the best policy towards the EU was euro-realism, which entailed the unilateral defense of Polish interests on one hand (negotiating funds to their maximum size), and on the other hand the defense of those areas in which Poland and other EU states did not agree in terms of handing over competencies to European institutions.

The PM noted that the EU is based on constant dialogue and compromise, as well as talks on regulation, political, financial, budget, investment, and economic subjects.

“Poland is conducting this dialogue with the European Union. In general, Poland is not only faring well in the EU, but will also continue doing so. We are a strong state in a strong EU, and it is hard to imagine the EU without Poland,” he emphasized.

A week ago, the Polish Constitutional Tribunal ruled that the EU treaty, based on which the Court of Justice of the European Union (CJEU) obliged member states to introduce interim measures concerning the judiciary, was incompatible with the Polish constitution. In the ruling’s justification, the tribunal noted that the EU cannot replace member states in creating regulations concerning the judiciary system and guaranteeing the independence of courts.

Mere minutes prior to the Polish tribunal’s decree, the CJEU (taking into account the European Commission’s demands) released another ruling concerning interim measures towards the Polish judiciary. The EU’s top court obliged Poland to immediately suspend the activity of state laws which concerned the Supreme Court Disciplinary Chamber’s competencies.

This means that Poland is meant to suspend the chamber’s activity also in the case of judge immunities.

Meanwhile, on Thursday the CJEU ruled on the incompatibility of the disciplinary responsibility of Polish judges with the EU legal system. The court claimed that the process of choosing judges to the Supreme Court and the Disciplinary Chamber mostly depended on the National Council of the Judiciary whose independence “may cause justified concerns.”