While a serious improvement in relations is still far off, it is realistic for Polish soldiers to travel to Africa to participate in missions important to France 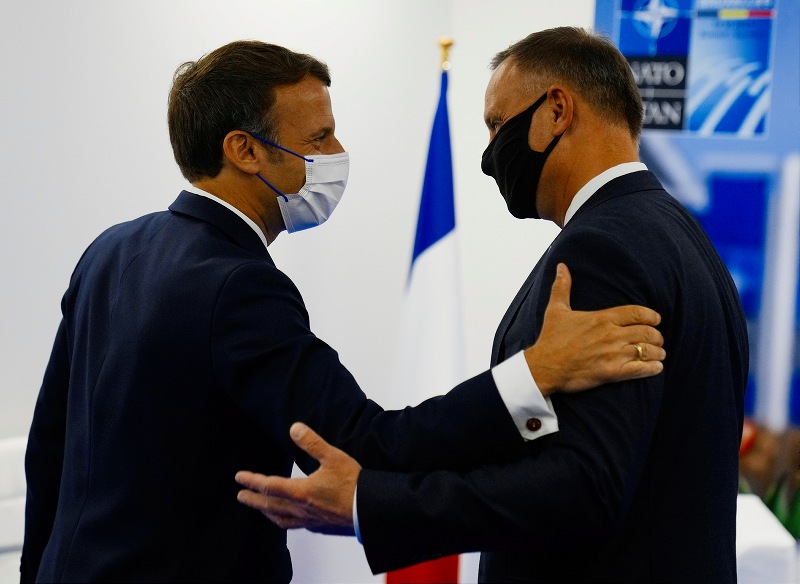 French President Emmanuel Macron greets Poland's President Andrej Duda during a bilateral meeting on the sidelines of a NATO summit at NATO headquarters in Brussels, Monday, June 14, 2021. U.S. President Joe Biden is taking part in his first NATO summit, where the 30-nation alliance hopes to reaffirm its unity and discuss increasingly tense relations with China and Russia, as the organization pulls its troops out after 18 years in Afghanistan. (AP Photo/Francois Mori, Pool)

Presidents Andrzej Duda and Emmanuel Macron took part in a meeting a few days ago in Tokyo during the Olympics. Officially, they spoke about the issue of the American-German agreement concerning Nord Stream 2.

Unofficially, according to Dziennik Gazeta Prawna information, the talks concerned a reset in Polish-French relations. The relations between the two countries severely worsened after Poland refused to purchase Caracal helicopters produced by Airbus in 2016. For the next few years, the situation between Poland and France was cold. Emmanuel Macron visited Warsaw at the start of 2020, but the visit did not translate into anything more.

Nevertheless, a renewal is currently underway. In March, the French president was visited by PM Mateusz Morawiecki, and now talks between Macron and Duda were held in Tokyo.

Which areas may see a resumption of harmonious relations?

In Tokyo, the presidents spoke about military-defense cooperation. Although there currently aren’t high chances for large orders from French military and shipbuilding companies (Poland is most definitely betting on the American solution, proof of which was Jarosław Kaczyński’s recent declaration about the purchase of 250 Abrams tanks), there is an ongoing discussion about a potential mission of Polish soldiers to the Sahel region.

The French are completing the “Barkhane” operation in Sahel, but President Macron has announced that France will maintain a military presence in that region of Africa. There is a chance that France will be supported by Poland in this case.

One possible scenario is to send Polish special forces soldiers in the role of instructors for local troops. Poland already has experience in this part of the world – in 2009, 300-400 Polish soldiers were stationed in Chad over a period of 18 months. Additionally, France has been applying for the aid of European allies in African missions for years. Now the sending of a few dozen soldiers to Africa is quite possible as the last shift of Polish soldiers in Afghanistan returns.

What does the Polish side expect in exchange?

According to an interlocutor from the National Security Bureau, Poland wants an increase of French presence in international military structures in Poland, such as the Northeast Corps in Szczecin and the Multinational Northeast Division in Elbląg.