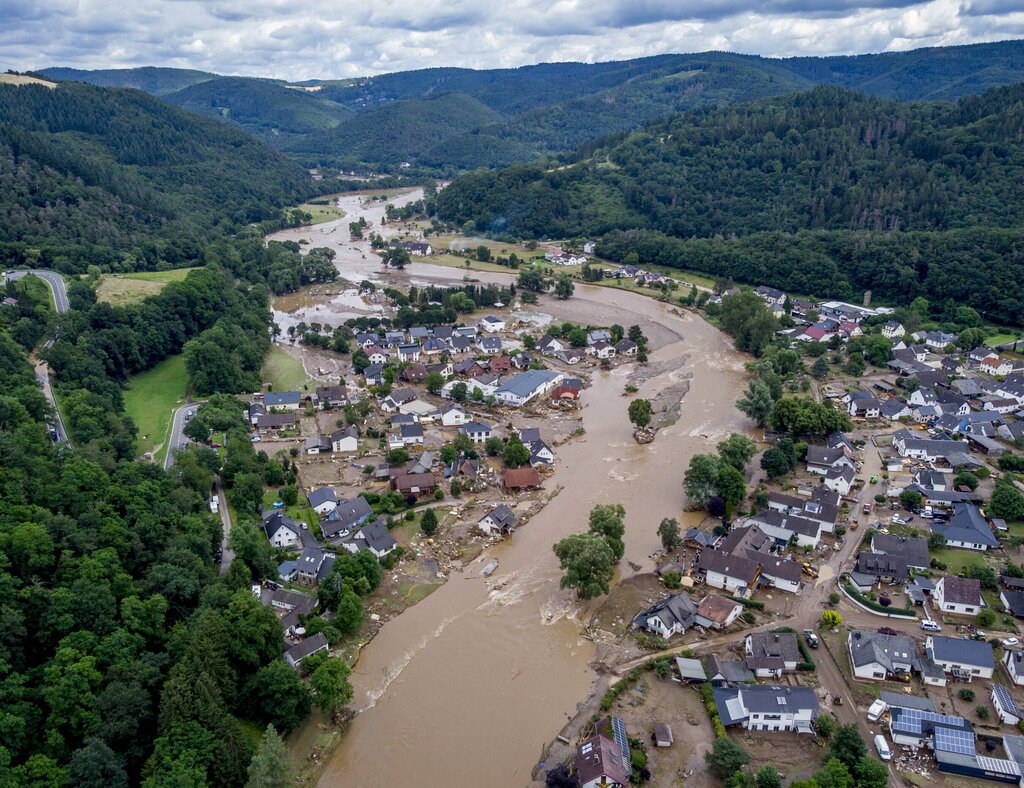 The Ahr river floats past destroyed houses in Insul, Germany, Thursday, July 15, 2021. Due to heavy rain falls the Ahr river dramatically went over the banks the evening before. (AP Photo/Michael Probst)

“We have spent almost 400 million euros in emergency aid since the last disastrous floods. We already know that we will have to spend much more this time, and we are prepared to do so,” Olaf Scholz said during a visit to the city of Schleiden-Gemuend in Western Germany, which was hit hard by last month’s floods.

Scholz added that the federal and state governments affected by the floods have agreed to share the tax burden on reconstruction work.

“Since the last major floods, we have spent six billion euros on reconstruction so far, the federal government and the state governments together. After the destruction that I see here now, and that you all see, we can say with certainty that we a much larger amount will be needed for reconstruction, “Scholz said.

In mid-July, severe floods devastated much of Western Germany, as well as neighboring Belgium and the Netherlands. The states of North Rhine-Westphalia and Rhineland-Palatinate were the hardest hit, but Bavaria and Saxony also suffered. The amount of damage caused to the infrastructure damaged by the floods that hit Western Germany was estimated at around two billion euros.

A total of 180 people lost their lives in the floods that affected Western Germany on July 14 and 15. The victims in Germany are added to the 36 in Belgium, so that the total number of deaths in this unusual weather in Europe is 216. Luxembourg, the Netherlands, and then Austria a few days later were also affected by the floods, but no casualties were reported in these countries.

Title image: The Ahr river floats past destroyed houses in Insul, Germany, Thursday, July 15, 2021. Due to heavy rainfalls, the Ahr river dramatically went over its banks the evening before. (AP Photo/Michael Probst)