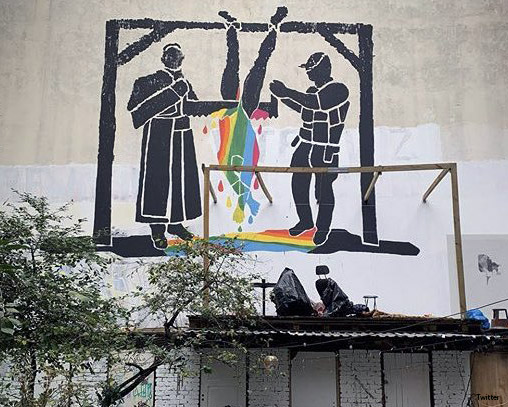 A mural painted by a pro-LGBT artist in Warsaw presents Poland as a homophobic country while also targeting the nation’s police forces, according to critics of the artwork.

The mural appeared on a squat in Warsaw’s center and is supposedly meant to draw attention to the difficult situation of LGBT people in Poland. In this case, however, the mural’s purpose seems to just be creating enmity towards the police and the Church. It also crosses the line of public decency due to its very graphic content.

The mural is currently not currently visible to pedestrians as it is out of public view and in one of the city’s backyards, but the Polish media outlet Gazeta Wyborcza described the mural as follows: “A gallows is present and next to it is a bishop on one side and a policeman on the other. They are sawing a body hung by its feet. The tortured body is bleeding rainbow blood.”

The mural is meant to be an allegory of LGBT protests in Poland during the summer. The news outlet explains that the bishop is torturing the LGBT person by proclaiming “pseudo-scientific theories” and calling for “curing homosexuality”. The policeman is meant to represent the behavior of the police, which detained LGBT persons during the violent protests in Warsaw on Aug. 7.

The liberal paper does not mention that during the protests the police operated legally and LGBT activists were attacking Christians groups that were peacefully protesting.

The situation is worrying to some, as it underlines that LGBT activists are determined to show Poland as a homophobic country in which violence against LGBT persons is perpetrated.

Deputy Minister of Climate and Environment Jacek Ozdoba criticized the mural, comparing it to propaganda from the era of Joseph Goebbels:

“Instigation and propaganda in Goebbels’s style. Disgusting. Wyborcza: gallows, next to it a bishop on one side and a policeman on the other. They are sawing a body hung by its feet. The tortured is bleeding rainbow blood. This was painted on one of Warsaw’s blocks.”

The mural was created by illustrator Mariusz Waras as part of the 1st edition Pandemic Art Attack festival organized by the squat’s inhabitants.