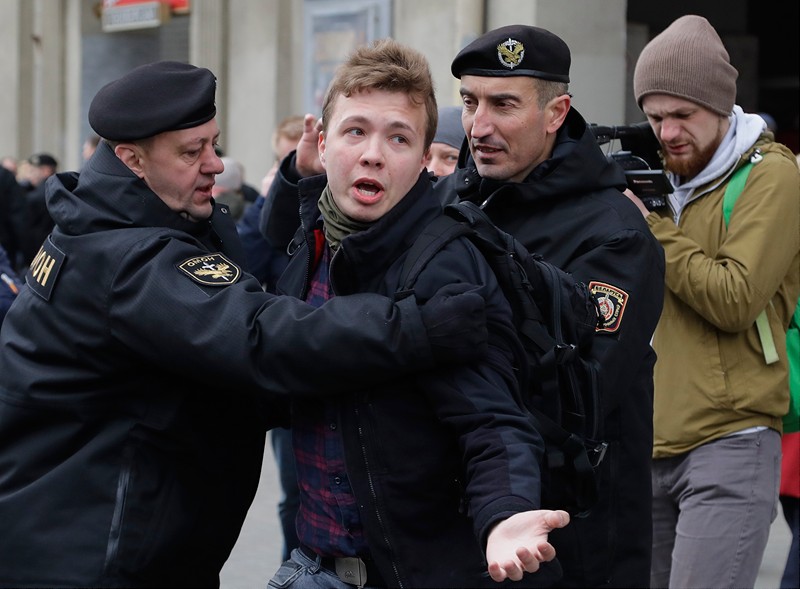 A Ryanair passenger plane flying from Athens to Vilnius was forced to land in Minsk on Sunday due to a supposed bomb on board the aircraft. Belarusian authorities confirmed that they had sent a MiG-29 fighter jet to accompany the plane.

“To be honest, there was no incident,” said one Lithuanian passenger, as quoted by portal Onliner.by. “The pilot sharply changed the flight’s course. Upon landing, we saw the vehicles of the fire department, the police and so on. A huge number of people showed up, and it was unclear as to what they wanted.”

He added that Belarusian opposition blogger Roman Protasevich, who works for the Poland-based online news service NEXTA, had gotten up and taken his bag. He tried to give his phone and computer to his girlfriend and began screaming that the plane could not land in Minsk.

Another passenger told portal elfi.it that Protasevich had allegedly claimed that the death sentence awaited him in Minsk.

“Four of us were led out of the plane, and police dogs sniffed everything. They took the young man (Protasevich) aside and shook out all of his things. We asked him what was happening, and he told us who he was and added: ‘The death sentence awaits me here.’ He was calmer now but still shaking,” the passenger said.

According to unofficial information, the pilots had been forced to land in Minsk by the MiG-29. Subsequently, authorities detained Belarusian opposition activist, journalist and blogger Roman Protasevich at the airport.

The plane finally reached Vilnius after an eight-hour delay. Apart from Protasevich, his girlfriend and four other people were missing from the aircraft, said opposition activist Pawel Latushka. Lithuanian PM Ingrida Simonyte came to the airport for the plane’s arrival, along with numerous supporters of the Belarusian opposition.

I condemn in the strongest terms the detention of Roman Protasevich by Belarussian authorities, after a Ryanair passenger aircraft was hijacked. This is a reprehensible act of state terrorism.

It is utterly unacceptable to force @Ryanair flight from Athens to Vilnius to land in Minsk.

ALL passengers must be able to continue their travel to Vilnius immediately and their safety ensured.

Any violation of international air transport rules must bear consequences.

Closely monitoring forcible landing in #Belarus of flight to Vilnius & reported detention of opposition figure Roman Protasevich. This is a serious & dangerous incident which requires international investigation. Belarus must ensure safe return of crew & all passengers.

The actions were condemned by many countries on Sunday via statements accusing Belarusian authorities of breaking international law, piracy, state terror and hijacking a passenger plane. They also demanded an explanation of the circumstances surrounding the incident and a decisive reaction from the international community.