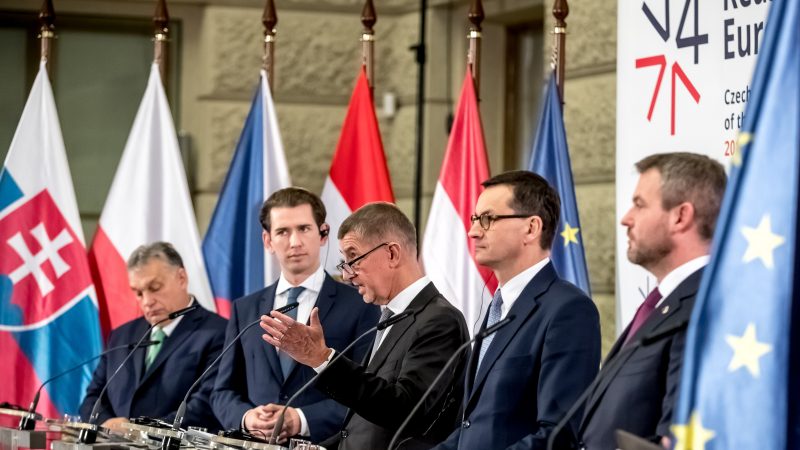 Prime Ministers of the Visegrad Four countries met the Austrian Chancellor Sebastian Kurz at the National Museum in Prague on Thursday to discuss migration, energy, and the future of the EU.

In many respects, the V4 countries found common ground with Austria, with the five leaders stressing that they wished to strengthen mutual relations, but differences remained regarding energy policy.

At the meeting, energy was a major topic, with the Czech Republic, Poland, Slovakia, and Hungary all expressing their desire to strengthen the importance of nuclear energy in their energy mixes, while Austria, along with many other countries like Germany, is striving for a departure from nuclear energy.

Kurz stressed that it was important for his country that money from the climate fund, which the EU is set to offer in order to compensate countries to make the transition away from coal, should not be used for nuclear power.

According to Kurz, the fund should support renewable energy sources instead.

Significant anniversary
Significant anniversary
Before the meeting, the prime ministers laid flowers together at the Jan Palach and Jan Zajíc
memorial, located on Wenceslas Square, where twenty-year-old Palach set himself on fire on January
16, 1969, to protested against the Communist normalization and Soviet occupation. After three days
in hospital, Palach succumbed to his injuries.
The V4 prime ministers’ meeting then took place at the National Museum, which is one of the
landmarks of Wenceslas Square

Despite Kurz’s position, the Czech Republic will not be able to achieve climate neutrality without nuclear energy, said Czech Prime Minister Andrej Babiš.

Kurz, however, considers it common for neighboring countries to agree on some issues and disagree on others. He added that he is proud to say that Austria will be the first country not to produce energy from coal.

The Czech Republic is planning the completion of nuclear power plants in Temelín and Dukovany. Polish Prime Minister Mateusz Morawiecki said after the meeting that he envies Austria’s energy mix composition but stressed that the differences between the two countries stem mainly from geological and climatic conditions.

Both V4 states and Austria oppose the redistribution of migrants

After the joint meeting, Babiš said that, according to both the V4 countries and Austria, quotas for the redistribution of migrants are not the solution to migration.

“The reform of the migration system must be based on the consent of all states,” Babiš said. According to him, no one can decide on behalf of states who will live in their territory besides the elected leaders of those states.

Kurz, who ran on strict stance on immigration, added that it is particularly necessary to protect the EU’s external borders from smugglers and to prevent illegal migration.

Politicians also addressed the EU’s multiannual financial framework for 2021 to 2027. They agreed that less money should go to the EU administration and more to nation states.

According to the Czech prime minister, the EU would not have to spend so much money on security either because most member states are part of the North Atlantic Alliance, which already increases individual security costs through NATO funding commitments.

While the V4 countries are beneficiaries of EU money, Austria puts more money into the EU than it gets out, Kurz noted.

“But we also see high administrative costs and the need to reduce them,” he added.

Enlargement of the EU

The meeting also included the question of the enlargement of the European Union. Babiš expressed the wish that the Union keeps its promises to start accession talks with Northern Macedonia.

Hungarian Prime Minister Viktor Orbán praised the fact that the V4 countries were given the opportunity to identify areas of cooperation with Austria at the Prague summit. He mentioned migration, competitiveness, climate, and EU enlargement as areas of common agreement.

Like Slovak Prime Minister Peter Pellegrini, Orbán said that the non-EU states of the Western Balkans could take part in the major debate on the future functioning of the EU and its institutions, which should begin as a conference on the Future of Europe on May 9.

After the joint meeting, the Czech prime minister attended a bilateral meeting with Kurz.

Babiš then said that both countries feature a strong alliance on rejecting the migrant quota system, Schengen enlargement, and demands for savings within the EU structures, although they do not agree on energy.

Nevertheless, the Austrian chancellor and the Czech prime minister consider the projects to better connect the two countries’ highway system a high priority and one of the most important factors for deepening mutual relations.

According to Babiš, Minister of Transport Vladimír Kremlík will head for Vienna to discuss details of the highway interconnection project and the timing of the opening of cross-border sections.

Before the meeting, the prime ministers laid flowers together at the Jan Palach and Jan Zajíc memorial located on Wenceslas Square. The memorial stands where 20-year-old Palach set himself on fire on Jan 16, 1969, to protest against communist rule following a Soviet-led invasion and occupation just months before.

After three days in hospital, Palach succumbed to his injuries.

The V4 prime ministers’ meeting then took place at the National Museum, which is one of the landmarks of Wenceslas Square.