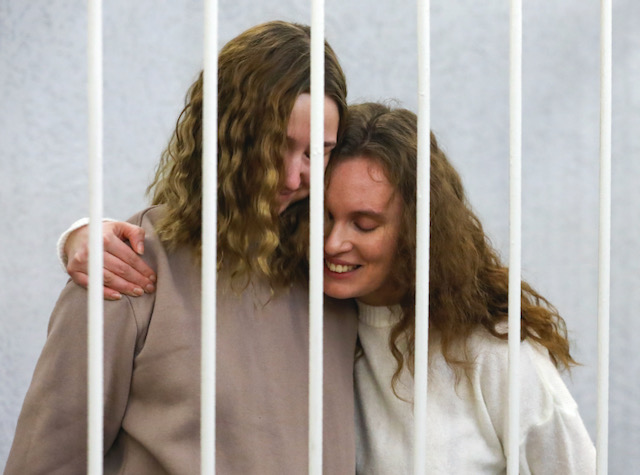 A Belarusian court has sentenced two Belarusian journalists from Poland’s Belsat television channel to two years in a penal colony on Thursday for filming protests against President Alexander Lukashenko.

Yekaterina Andreeva and Darya Chultsova were detained in an apartment in November from where they had been filming protests taking place over the death of Roman Bandarenko, a protester who was killed several days earlier.

Andreeva and Chultsova, a journalist and camerawoman working for Belsat TV, were accused of the “organization and preparation of actions that grossly violate public order” while covering a rally in Minsk. Both women pleaded not guilty after being accused of orchestrating the demonstrations by filming them.

The two journalists appeared in a cage at the hearing on Thursday, hugging and making “V” for victory signs. They asked the judge: “Why not sentence us for 25 years straight away?”

Since August 2020, around 400 journalists, representing both foreign and local media outlets, have been apprehended or assaulted while reporting on protests throughout the country. But the trial of the Belsat journalists was the first in which journalists were charged with a criminal offense

The case was presided over by judge Natalia Buhuk who has already sentenced 44 demonstrators to nearly 500 days in jail. The prosecutor in the case was a 22-year-old lawyer who has already been involved in prosecuting people for having painted “We won’t forget” on street pavement after the death of Roman Bandarenko in the autumn.

The trial of the two Belsat TV journalists has been criticized by a wide range of international bodies as a political show trial. The release of the two women is being demanded by Polish President Andrzej Duda, the European Broadcasting Union, European Journalists Federation, and the Reporters without Borders organization.

TV Belsat is part of Polish public broadcasting corporation TVP. The station broadcasts in Belarusian and Russian languages into Belarus. It has become an important and independent source of information for both Belarusian society and for observers of East European affairs.