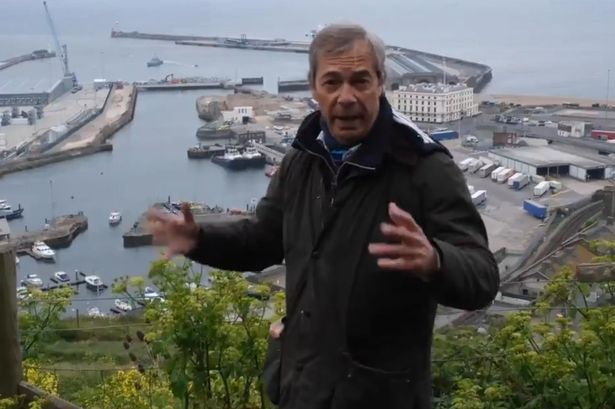 British police officers paid a visit to Brexit Party leader Nigel Farage on Monday to issue a warning that Farage should follow “essential travel” rules after he reported on a migrant boat arriving in Dover.

Farage, who has long campaigned against illegal immigration to Britain, filmed the British Border Force bringing a group of migrants to shore in the port at Dover. According to him, the group included a very young baby.

“They had received a complaint that I had been to Dover to report on the illegal migrant scandal taking place,” Farage wrote on Twitter after two police officers came to his door.

“What a total waste of time and money,” he added.

Two police officers just knocked on my door to advise me on essential travel.

They had received a complaint that I had been to Dover to report on the illegal migrant scandal taking place.

What a total waste of time and money.

Farage’s video of illegal migrants landing in Britain had over 400,000 views after he posted it to Twitter.

“The Border Force is supposed to protect our borders, not be a taxi service for illegal immigrants and yet that’s what the Home Office is telling them what to do,“ Farage wrote on Twitter.

I witnessed first hand our Border Force acting as a taxi service for illegal migrants in Dover this morning. This scandal continues and people have got every right to be angry about it. pic.twitter.com/1uwqIQyjJu

There are exceptions allowed to the restriction of movement for certain key workers including journalists and broadcasters who are providing public service broadcasting. Farage said he was reporting on the landings in a journalistic role.

Police in the UK have also been accused of being too eager when it comes to enforcement of national restrictions. The Crown Prosecution Service will review every charge, conviction, and sentence that has been brought under the Coronavirus Act after a series of wrongful convictions.

Farage blamed the Home Office’s inactivity for the growing scandal of the illegal boat with migrants landing on British shores during coronavirus crisis with 600 already arriving during the coronavirus crisis. The Border Force stopped 49 migrants on Sunday as they attempted to cross the English Channel in three rubber boats while an additional 16 migrants were brought ashore by British authorities on Monday.

Farage noted the enormous risks people are taking to reach the Britain, but also warned that it should be remembered that this illegal migration is organized by criminal trafficking gangs.

“Remember that even if some of these people qualify as refugees, you claim refugee status in the first safe country you come to. France is a safe country, and I do just get the feeling that we are being so weak about this… that if already over a thousand people have come this year… goodness knows what this figure is going to be,” the Brexit Party leader added.

“If we get a calm summer, they are going to start coming in much, much bigger vessels, and we’ve got to get a grip on this,” Farage warned.

Farage previously reported from the beaches of East Sussex, where he interviewed locals. They said that some of the illegal migrants land entirely unobserved by authorities and many of the landings are not covered by the press simply because they are happening under the radar.

Last week, Home Secretary Priti Patel spoke to her French counterpart about returning more migrants to France. However, there has been no indication from the British government that it intends to turn away migrants at the border.