UK to return migrants on boats to Europe 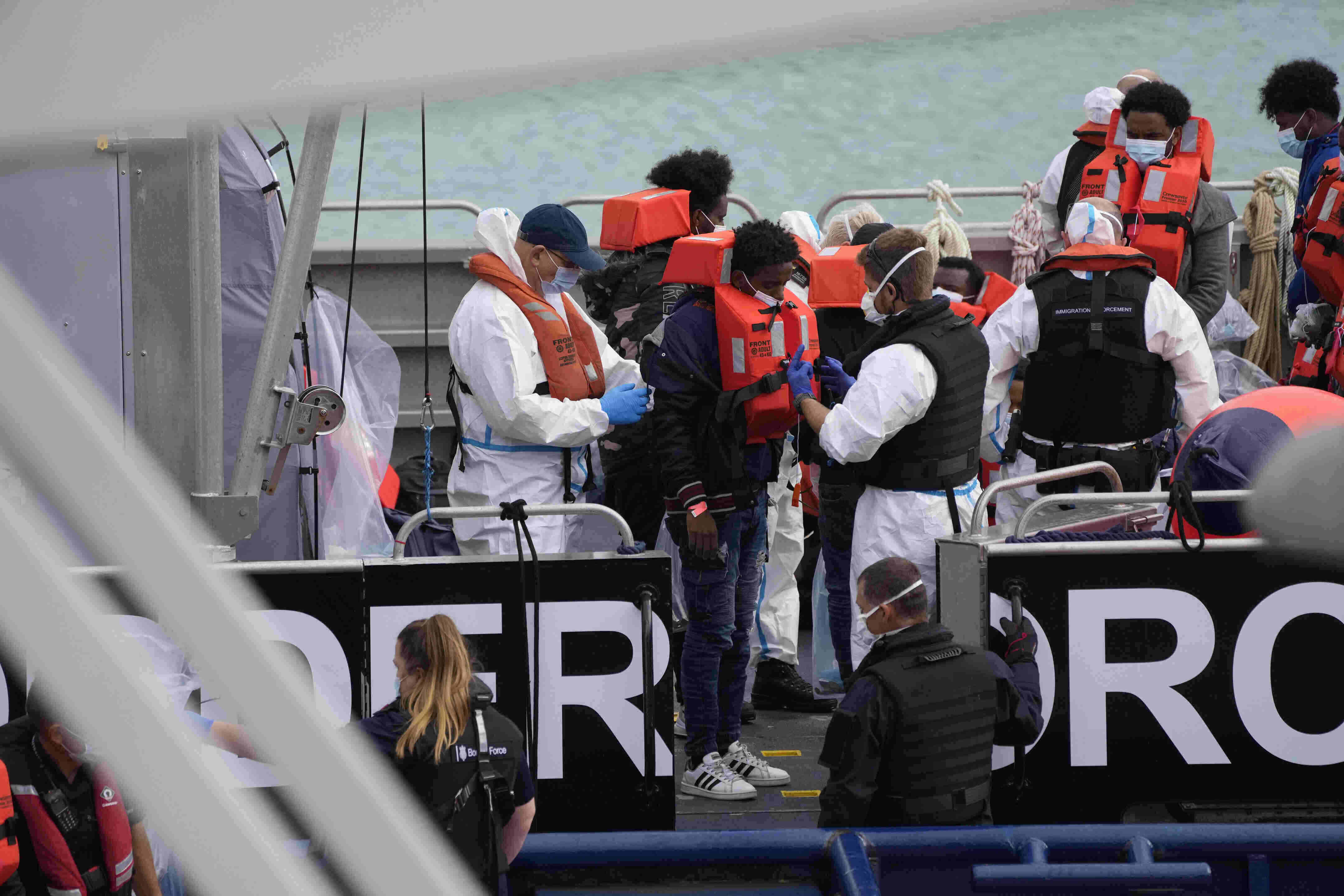 People thought to be migrants who made the crossing from France are disembarked after being picked up in the Channel by a British border force vessel in Dover, south east England, Friday, Aug. 13, 2021. On Thursday French authorities said an undocumented migrant was airlifted to hospital from the English Channel after a boat carrying about 40 people trying to reach the U.K. started to sink Thursday morning. (AP Photo/Matt Dunham)

According to the UK government’s new strategy, the British Coast Guard is to return boats with migrants who enter British waters while trying to cross the English Channel. British Home Secretary Priti Patel ordered the new policy, according to British media reports, citing government sources.

Until now, British patrols accompanied migrants on boats to the coast of England. French Interior Minister Gérald Darmanin reacted sharply to the change in British tactics, declaring that France would not accept any action against maritime law or blackmailing.

On Wednesday, Patel spoke about the issue to her French counterpart Darmanin without achieving a tangible result. British Prime Minister Boris Johnson had previously announced that London would use “any possible tactics” to stop migrants’ journeys across the channel.

However, according to The Daily Telegraph, the new strategy is to be implemented only under “very limited circumstances” when migrants are transported on large boats, and the situation is considered safe.

Darmanin said that he had made it clear to Patel that the UK must honor its commitments regarding migrants attempting to arrive in the country.

“France will not accept any practice that breaks maritime law, nor any financial blackmail,” Darmanin wrote on Twitter.

According to the British press, Patel threatened France at the beginning of the week with not providing the promised more than €60 million, which were to help finance the strengthening of French law enforcement forces on the coast.

A spokesman for Johnson said on Thursday that London is convinced that any approach to migrant boats that Britain takes will be in accordance with the law, Reuters reported. According to the spokesman, the British government will continue to explore a range of safe and legal options to prevent small boats from sailing across the English Channel.

“We continue to assess and explore several safe and legal options to find ways to prevent small boats from embarking on this dangerous and unnecessary journey,” Reuters quoted the spokesperson as saying.

Experts consider returning boats without cooperation with the French authorities to be practically unfeasible. According to them, such a procedure poses too many risks given that the boats used by migrants are hardly adapted to sea navigation. In addition, since Brexit, the British authorities have not been able to return asylum seekers who enter the country illegally to the countries of the European Union.

The warm weather in recent days has led to an increase in attempts to cross the channel. On Monday alone, 785 people tried to get to Great Britain in small boats, according to the British Home Office. According to the PA agency, more than 14,000 people have already crossed the channel to England this year, while last year, it was 8,400 people.

On Wednesday, after allegedly “constructive discussions” with Darmanin in London, Patel emphasized that stopping boats from crossing the channel was an “absolute priority.” However, Darmanin warned on Monday that the return of migrants could have a negative impact on Franco-British cooperation and that the priority is to save lives. Darmanin also rejected the British proposal to create a joint command center of the French and British coastal forces, stressing it would be contrary to French sovereignty, as well as unnecessary because the existing coordination is “good and effective.”

London, which has made tightening the fight against immigration a priority after Brexit, has long been pushing France to step up its efforts to prevent dangerous voyages across the English Channel.

Title image: People thought to be migrants who made the crossing from France are disembarked after being picked up in the Channel by a British border force vessel in Dover, south east England, Friday, Aug. 13, 2021. On Thursday French authorities said an undocumented migrant was airlifted to hospital from the English Channel after a boat carrying about 40 people trying to reach the U.K. started to sink Thursday morning. (AP Photo/Matt Dunham)