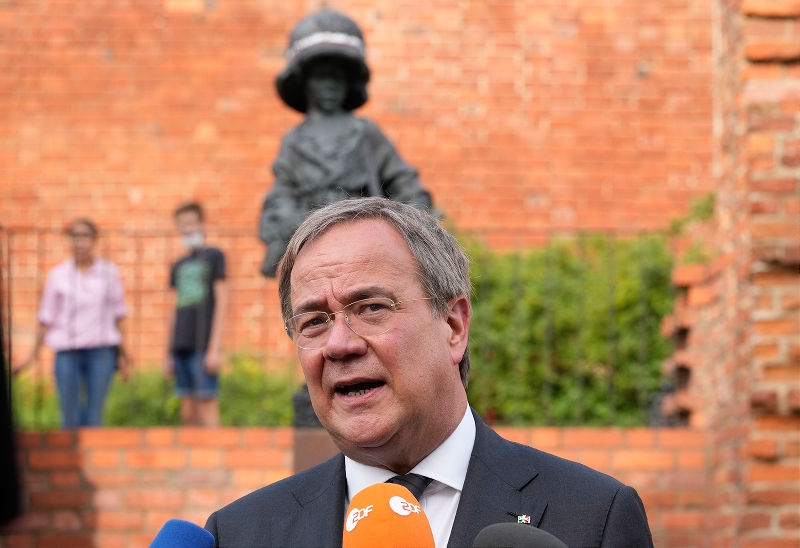 Germany's center-right candidate to replace Angela Merkel as chancellor in the upcoming elections, Armin Laschet visits the monument to children who fought in the 1944 Warsaw Rising against occupying Nazi Germany, during observances marking the 77th anniversary of the ill-fated revolt, in Warsaw, Poland, Saturday, July 31, 2021. Laschet said in an interview he feels "deep shame and humility" over Nazi Germany's "crimes" against the Poles during World War II.(AP Photo/Czarek Sokolowski)

What has just happened is most definitely an invitation for dialogue with Poland.

Armin Laschet, the Christian Democratic Union of Germany’s (CDU) candidate for chancellor, is in the midst of critical weeks prior to the German Bundestag elections on September 26.

If they go positively for him, Laschet will take over leadership in Angela Merkel’s place.

Yet even during heated moments in the election campaign, Laschet found time to participate in the commemoration of the 77th anniversary of the 1944 Warsaw Uprising. He was accompanied by the CDU’s secretary general Paul Ziemiak, who is responsible for Laschet’s election campaign.

“Germany is aware of its historic responsibility towards Poland,” Laschet said in an interview for “Rzeczpospolita”. He also said that he is convinced that every young German should visit Auschwitz to see the crimes committed by his or her ancestors. These are not commonplace declarations from the lips of a politician who was born after the war and hails from the French-German border.

Now, the question is: will these words translate into healthy political cooperation between Poland and Germany?

In the six years since Law and Justice (PiS) took power, Angela Merkel has shrugged off pressure from France, the Netherlands, and other countries to shove Poland away onto the EU’s margins. Laschet clearly wants to continue Merkel’s policy.

As head of a region in which many of Germany’s most important companies operate, he knows how important Poland is to German business and the importance of Poland’s role as a bulwark against Russian aggression. Laschet made assurances that Germany’s strong partner in the West is France – and, in the East, Poland.

Laschet also takes a strong position when it comes to defending rules of democracy but does not close the way for an agreement with Warsaw.

“Media pluralism is key to the right to freedom of expression,” he commented on the possibility of liberal TVN losing its broadcasting license. Laschet added that it was appropriate for Europe to use all legal measures possible written into EU treaties to guarantee the observance of EU law everywhere.

What is crucial for Poland, however, is the rejection of Emmanuel Macron’s plans to deepen the integration of the Eurozone. In particular, Laschet opposes the idea of the European Commission’s emission obligations for financing the Recovery Fund, which would set a precedent and thereby pave the way for the EU’s transformation into a federal state.

Of course, Laschet has another side as well.

He is a politician who first and foremost cares for German national interests, albeit behind the cover of declarations about European values. He has no problem with accepting Nord Stream 2 despite the “pacification” (let’s call it that) of the democratic rising in Belarus and the imprisonment of Alexei Navalny.

Without batting an eye, Laschet said that Ukraine’s sovereignty is a priority of German foreign policy. He similarly supports maintaining close relations with China, despite Joe Biden’s attempts to steer Berlin away from that idea and Xi Jinping’s authoritarian policy. In the middle of commemorating the 1944 Warsaw Uprising, he also maintains a tough position on reparations for Poland.

Will all of this clutter make it impossible to reach an agreement with the future chancellor?

This largely depends on Poland. Our country already knows very well that everyone defends their own interests in the EU, not just Germany. Yet Poland still has not found a way to do this effectively.

A textbook example is the judiciary reform which hasn’t brought any clear effects for Polish citizens and companies and has cost our country so much on a political scale. As a result, we see the possibility of a country walking down the authoritarian path, which radically limits coalition options in Brussels.

It seems that by playing tough, we may achieve much with Laschet, as he understands Poland’s value to Germany. But this must be done skillfully, and Poland is still has a long ways to go.

Title image: Germany’s center-right candidate to replace Angela Merkel as chancellor in the upcoming elections, Armin Laschet visits the monument to children who fought in the 1944 Warsaw Rising against occupying Nazi Germany during observances marking the 77th anniversary of the ill-fated revolt, in Warsaw, Poland, July 31, 2021. (AP Images)