By outing the spokesman without his consent, the Polish activist Bartosz Staszewski has shown that LGBT is indeed an ideology, writes Goran Andrijanić for portal wPolitice.pl 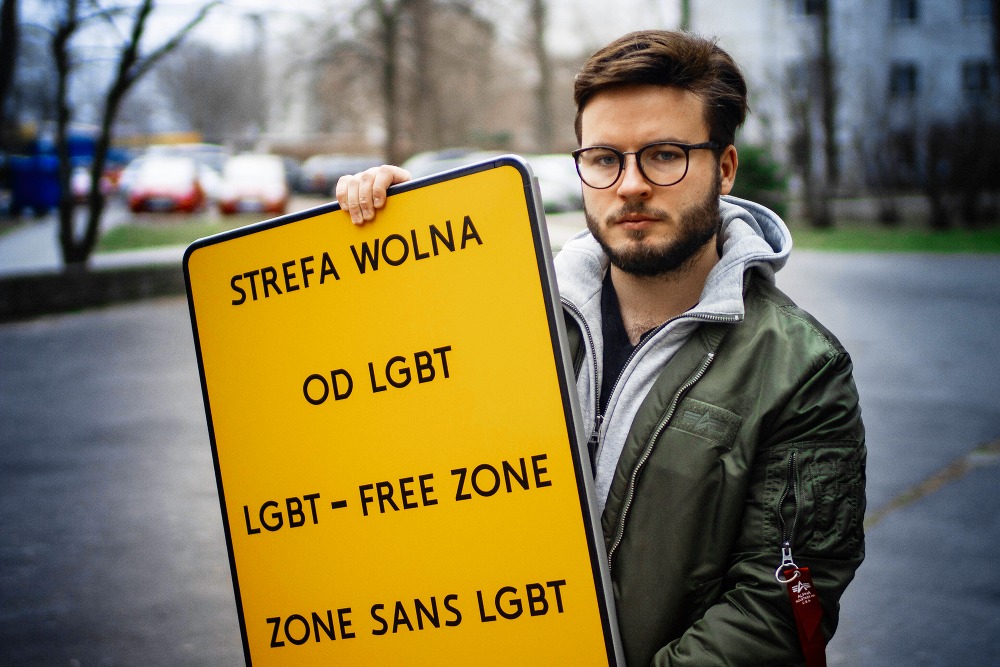 Bart Staszewski, an LGBT activist, holds up a sign he uses to protest anti-LGBT resolutions, in Warsaw, Poland, Jan. 24, 2020. Staszewski has carried out a protest in some 40 Polish towns that have passed resolutions declaring themselves opposed to "LGBT ideology." Staszewski's protest involves photographing a sign he made with the words "LGBT-Free Zone" with the town's official sign. As international pressure mounts on Poland over the government's treatment of its lesbian, gay, bisexual and transgender community, the prime minister has accused Staszewski of falsifying Poland's image. (AP Photo/ Przemysław Stefaniak)

“If Łukasz Jasina, the new Foreign Affairs Ministry spokesman really is gay, then this must be talked about, and he must be ridiculed. This government attacks LGBT people and creates LGBT free zones,” Staszewski posted on Twitter.

Staszewski was referring to his own campaign opposing so-called “LGBT-free zones”. Staszewski gained the attention of the international press when he had photos being taken of him in front of a sign that read “LGBT-free zone” which he put up in various locations in Poland. However, there are no “LGBT-free zones” in Poland, only municipalities which have pledged their support for a family charter which rules out LGBT sex education in schools without parental consent.

This is a personal attack on Jasina for his sexual orientation and release of information about his private life without his consent. It should not matter what sexual orientation he has for the job he is doing. The only thing that matters is whether he is competent for the post.

What is interesting is what it reveals about people like Staszewski.

They are incapable of seeing people as individuals, only subjects who must conform to LGBT ideology. If you do not support LGBT ideology, you have no right to be gay, seems to be their line of thinking.

This is similar to the way feminists stay silent when misogynistic attacks take place on women who are conservatives. A woman only becomes a woman if she is a feminist. In the same way, a gay only becomes fully worthy of the label if he supports LGBT campaigns.

Staszewski has inadvertently proven that LGBT is an ideology rather than people with real problems and feelings.