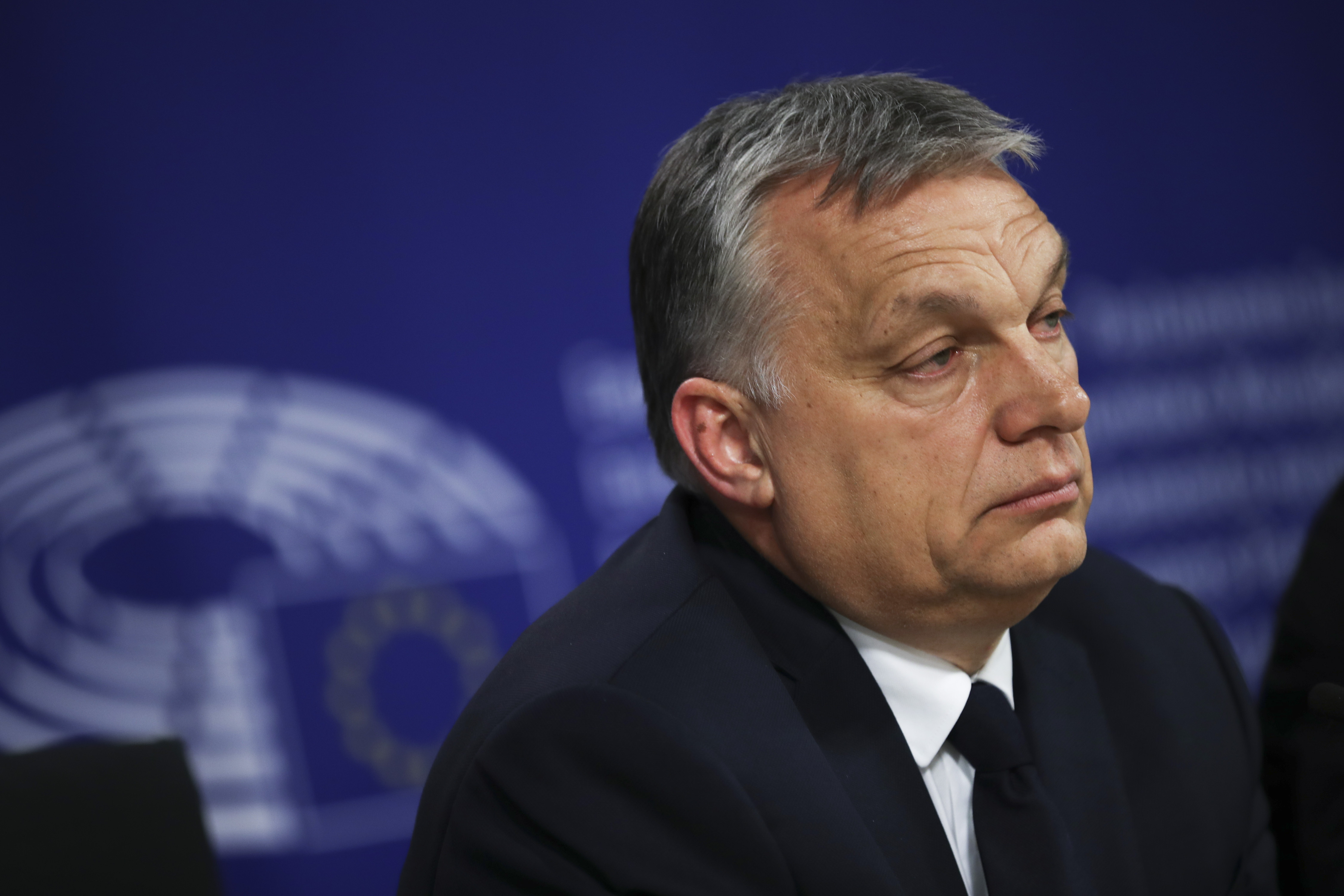 We sat by the rivers of Babylon. We wept. Babylon is without a sea.

A different song is ringing in everyone’s ears with the news that Fidesz has left the EPP: For Manfred Weber, it’s the “Ode to Joy”; for Ferenc Gyurcsány, “The Traitor Is Dead” [from Ferenc Erkel’s opera László Hunyadi]; for József Szájer, perhaps the contemporary Hungarian pop song “I’m Staying Away”; as for me, I simply couldn’t get Psalm 137 out of my head.

Apparently, Christian democracy has become an exile, a shipwreck, a prisoner in the European Parliament.

On the left, it is bordered by a motherless-fatherless People’s Party, with CDU/CSU as its engine, a group that contains traces of Christianity but is actually more of a gay-party whose car-manufacturing/deporting right-wing can’t even agree that “right-wing” isn’t a swear word (I’m looking at you, Mr. Söder).

On the right, it is bordered by Identity and Democracy, within which you have the eyesore of Germany’s AfD, which has some legitimate, socially critical ideas but zero preparedness; one or two slightly Nazi-smelling leaders; and some unacceptable views that are embarrassing even in rural pubs.

We are caught between two German factions, both of which have the same problem: that the circles of Weber and Meuthen are pagans disguised as conservatives, and pagans will never become proper Christian Democrats.

It is painful to think about Zion between these two stinking streams of Babylon. It makes one’s position within the European Parliament’s largest faction, a seemingly strong mainstream community, uncomfortable. To leave a faction, especially a huge one built up since 2004? This may be simple for a voter — but a nightmare for a politician.`

Even if the arguments are not entirely clear in one direction or another, and comrades-in-arms are uniting with liberal crusaders, leaving is no easy thing.

Yet he who remembers Zion knows: We had to move on.

We hanged our harps upon the willows, in the midst thereof. (Psalm 137.2)

Our harp is on the willow. Torment speaks with a different voice. (Ágnes Gergely: Psalm 137)

There are two manifestations of Fidesz.

For those who do not believe this, I will explain.

One Fidesz governs Hungary — well or poorly — of course, everyone has a different view on this. As a descendant of a Transdanubian, Christian, intellectual family, well-trained in the ways of communism, a traveler and a church-school graduate, I saw this kind of government as good; others may not agree with me, nor do they have to. We will discuss this later. But Hungary is undoubtedly an existing thing, a tangible, travelable country in the traditional sense that needs a government and is now governed pragmatically by One Fidesz — a party that supports families and is pro-market, is very conscious of its foreign policy and holds anti-migrant views, albeit sometimes in an awkward and culturally warlike way. One may like or dislike it, according to one’s personal taste.

The Other Fidesz works in the European Parliament. And the European Parliament is not simply an existing entity — it is a postmodern media space in a “Puzsérian” sense [Róbert Puzsér is a Hungarian publicist, known mostly for his sharp criticism of various political phenomena], where reality is constructed by words and motions, and truth, lies, law, rules, and honor have no immanent value. If the European Parliament maintains any contact with the world outside the bubble of meeting rooms, political offices, lobby meetings, restaurants, and gay parties in Brussels and Strasbourg, then this is, at best, through Facebook.

There is no antecedent, basis or consequence in the postmodern media space, there are only stand-alone statements worth voting for, and these expire the same day. Here Pozsony can become Bratislava, while Wien stays Vienna; here, Anna Donáth may or may not be an informant for Věra Jourová, depending on the target audience; only here can Hungary be fascist depending on the current interests of capital and the opportunity for migrants; the dictated gay law, democratic; the indigenous Hungarian minority, irrelevant; European foreign policy, successful; József Szájer, a Christian Democrat; Jean-Claude Juncker, a statesman. The world of the European Parliament is a dream world constructed by words, from which, sometimes, a postmodern mess descends into utter nonsense.

The Other Fidesz works here and does not govern but represents — Hungary on the one hand, and common sense on the other, with educated, gentle, smart Europeans, not only for the benefit of our country, but also in the face of postmodernism.

One Fidesz will benefit from the exit. Its supporters have long been anti-People’s Party, and leaving the faction will not entail material or domestic political damage to the country; moreover, its dignity will benefit from a move that has been hanging in the air for so long. The Other Fidesz, on the other hand, lies weakened. Very much so.

The Other Fidesz works here and does not govern but represents.

Yet, the mission of the Other Fidesz is important, and if we looked closely at the work going on there, perhaps more people would agree with it than with the domestic Fidesz. The judgment of the latter may be subject to the interests of the former, but the Other Fidesz is the representative of the Good. And its harp is now on a willow. It cannot stay there.

We need a team, we have to do a job that Fidesz may have never done intensively enough during its 12-year EP majority:

European allies must be sought and the chaff must be actively separated from wheat.

Until the next European Parliament elections in 2024, a concept must be drawn up that unites the right within the European Parliament, which is currently scattered in three completely non-conceptual factions against the Social Democrat, Liberal and Green groups, which are clearly demarcated along ideological lines. It is necessary to ensure that the EPP remains the hospice home of pseudo-right putty associations, such as the Swedish Moderates, the stagnant Polish Civic Platform or the Romanian National Liberal Party, and to organize the Hungarian right to join forces with at least the Italian Right, comprised of Salvini’s League and Meloni’s Brothers of Italy as well as the Polish PiS, the Swedish Democrats, the Finns, the Flemish conservatives, the Danish People’s Party, and others.

There must arise a strong European Christian Democratic pillar that cannot be blackmailed by the left and which distances itself from the pagan far-right.

Over the next three years, the European right must focus on renewing and building alliances. Otherwise, it’s all over. The EPP will remain, which the left will blackmail into any political position it wants; and the lunatic, rude extremists will remain.

If I forget you, O’ Jerusalem, let my right hand forget its skill! Let my tongue stick to the roof of my mouth if I do not remember you. (Psalm 137, 5-6)

May Amen be inscribed on my right arm grown cold, if I forget you, Jerusalem.

No one is offering up a framework for MEPs who are stepping out independently. We need something, someone to whom the Hungarian right can stick to in the European Parliament.

There are warning signs from the past. If MEPs representing our country do not have a moral stance, it will be harmful both to the party and the country.

The European People’s Party is not a framework, not a backbone, not a direction. If gutter Christianity is an accepted view somewhere, then it certainly is there, and if József Szájer had not happened to be a Hungarian at a time when it was not advisable to be so in Brussels, his parallel life would never have come to light. Many others are not exposed, and the People’s Party has plenty of room in its closet for politicians in Brussels hiding many strange things.

The political community that now remains in the solitude of independence for a few years needs moral strength. The Hungarian loneliness in Brussels cannot contain parallel lives, unbalanced souls, or expired morals. Christian democracy is a sacred cause to be defended, not a pose, not a livelihood. If you don’t believe in it, don’t do it. But whoever forgets Jerusalem on the way, let their tongue stick to the roof of their mouth.

O daughter of Babylon, doomed to be destroyed, blessed shall he be who repays you with what you have done to us! (Psalm 137, 8)

The people claw our sign into the wall. Who incites them—they don’t know why they do it. / A royal sign, it has outlived many other signs. Do not blame them, my Lord, their transgression! (Ágnes Gergely: Psalm 137)

The European People’s Party is not on the ballot anywhere in the world. Criticism of the EPP over Fidesz arose in the postmodern space of the European Parliament, and there it remained, and yet, there was never any real political consequence. Nobody in Germany is going to opt for the Greens instead of the CSU because Söder was colluding with Fidesz; even the Polish opposition did not become socialist because Donald Tusk and Orbán had the same tag on their foreheads. Consequently, with the exit of Fidesz, the cumulative amount of benefits remaining for the European People’s Party is zero.

We are talking about a typical lose-lose situation: Fidesz has quit a dominant, large faction, which will at least lead to the loss of parliamentary positions; and the People’s Party lost its third-strongest delegation in terms of population, weakening it vis-à-vis the very groups that blackmailed it into this decision, namely the Socialists and Democrats, Renew Europe and the Greens. The EPP did not see through the elementary political math. They did their opponents a favor for nothing. It was political suicide instead of wise restraint or a sense of responsibility. They didn’t know why they did what they did.

Brussels’ self-destructive daughter will not wait long for punishment. Anyone who has ever seen organized crime in action knows that blackmail rarely stops at the top. The blackmailer blackmails for as long as the blackmail works. And the People’s Party allowed its political opponents to force it to stab its decades-long ally in the back — for zero compensation. It showed weakness. From here on out, the trends of the People’s Party in the coming years are clear: the European left will blackmail them to the point of total self-sacrifice until all of their positions begin to look eerily similar to those of the Social Democrats, Liberals and Greens.

They will pull the People’s Party to the left until it is no longer needed at all. The People’s Party, which once achieved 38 percent of the votes in the 1999 European Parliament elections, was not far from that magical 20 percent in 2019. If they continue like this, they will be pushing up daisies in 2024.

And by God, they deserve their loss. They were warned.

Just let there be a European right by then: real, simple, Christian. And Brussels’ self-destructive daughter can salami slice herself into a neat pile, as nicely as the stars move across the sky. It will be worth it.