Czech government to lift most coronavirus measures by March, but face masks will remain

Only a minimum of restrictions will remain, such as the wearing of face masks indoors 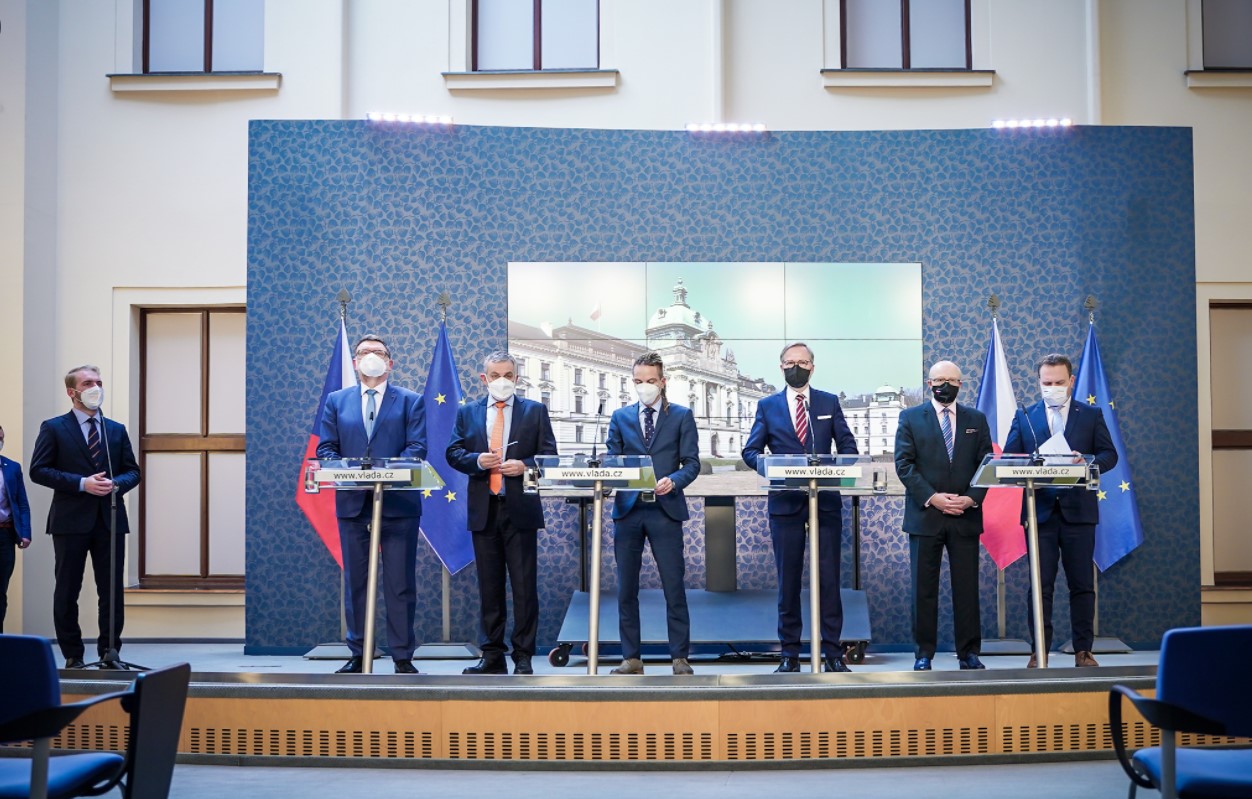 Czech ministers and Prime Minister Petr Fiala after the meeting of the government. (The Office of the Government of the Czech Republic/Twitter)

The Czech Republic will soon scrap the majority of its coronavirus measures, with only a minimum of restrictions remaining in place from March, the country’s prime minister, Petr Fiala, has announced.

It is expected that the wearing of face masks indoors will remain mandatory dependent on the development of the pandemic, which is estimated to be culminating in recent days. However, the requirement of Covid-19 passports for example, in restaurants, will be a thing of the past from Thursday.

After Wednesday’s government meeting, Prime Minister Petr Fiala announced that the number of participants in mass cultural and sports events would also gradually increase. Next week, blanket testing in companies and schools will also end.

“We will gradually increase the number of participants at cultural and sporting events, with the idea that very few of the restrictive measures will be in force from March 1, practically only the wearing of face masks,” commented Fiala on the new measures.

According to him, there is the prospect that further mitigation of the pandemic could take place in March. However, according to some experts, abolishing Covid-19 passports and the further easing of measures is premature.

The prime minister argues that the development of the number of infected individuals and the hospital bed occupancy rate corresponds to experts’ predictions.

Although coronavirus has now started to spread among seniors, Minister of Health Vladimír Válek explained that public health officials pay more attention to tracing their contacts.

Even though Covid-19 certificates will not need to be presented when visiting events or restaurants from Feb. 10, they will continue to be required for traveling abroad. From mid-February, certificates’ validity will be limited to nine months after getting the second dose of the vaccine and can be extended with a booster dose.

At the next meeting of the Chamber of Deputies in mid-February, the government will say when the pandemic emergency in the Czech Republic should end. That could happen during March when the last restrictions are released. During a pandemic emergency, the Ministry of Health may issue blanket coronavirus measures under the Pandemic Act.

The Senate will discuss a controversial government amendment to this law, which, among other things, expands the possibilities of issuing Covid-19 measures. Senate committees have approached the draft differently; while the Medical Committee recommended the approval of the draft, the Constitutional and Legal Committee rejected it.

In the Czech Republic, more than 3.3 million cases of Covid-19 have been recorded since the beginning of the coronavirus pandemic in March 2020. The growth rate of the disease increased significantly in autumn 2020, at the turn of 2020 and 2021, and last March. Since the beginning of last December, the numbers have been declining, but in the second half of January, they started to grow immensely due to the spread of the more contagious Omicron variant. A record 57,232 cases were reported on Feb. 1 this year. After that, the numbers began to decline.