The Romanies allegedly make a mess in the facility, do not have fundamental personal hygiene habits and are not polite to its staff 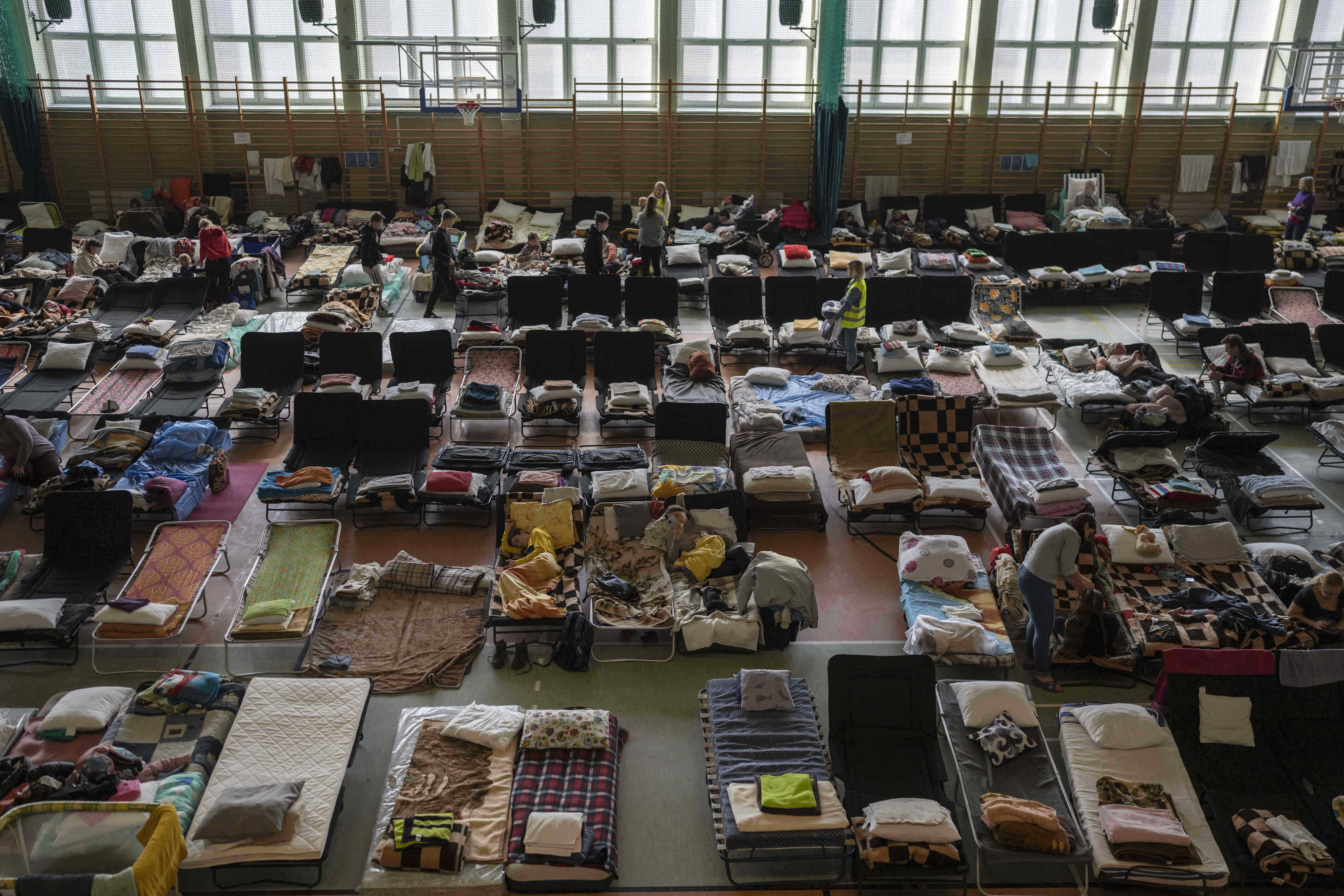 People who fled the war in Ukraine rest inside an indoor sports stadium being used as a refugee center, in the village of Medyka, a border crossing between Poland and Ukraine, on March 15, 2022. (AP Photo/Petros Giannakouris, File)

While decent housing is being sought for ethnic Ukrainians, Romany groups are heading in large numbers to the former detention facility in Vyšní Lhoty near the Czech-Slovakian border.

Human rights organizations and people who evacuated the Romanies to the Czech Republic are protesting against the procedure. However, locals complain about the behavior of the Romanies. The Interior Ministry denies segregation but promises change.

Nearly solely Roma refugees from all over the country have been traveling to the center in Vyšní Lhoty in eastern Moravia for three weeks now, three credible sources have confirmed to the iDNES.cz news outlet.

“Buses bring dozens of Romanies from regional assistance centers from all over the country almost every day,” confirms the center’s staff, adding that they are often Hungarian-speaking Romanies from the Zakarpattia region in western Ukraine.

According to testimonies, the segregation of Roma refugees is already beginning in regional assistance centers. The Romanies often do not even get off the bus and are aimed straight to refugee centers. For example, in the center of the town of Ostrava, Roma refugees are said to be separated from others by tape and inverted tables, and their free movement is restricted. They are accommodated in areas where illegal migrants from Tunisia, Morocco, and other African countries lived a few months ago and are guarded in common areas.

“These are unsuitable rooms. After all, it used to be a space for serving a sentence and then a detention facility,” criticized the founder of the Češi pomáhají (Czechs help) initiative, Jaroslav Miko, who helped transport Roma refugees from Ukraine to the Czech Republic.

“It is nothing for a long-term stay or a place where you can put someone right after arriving from a war-torn country,” he added.

Jan Piroch, a spokesman for the Administration of Refugee Facilities, admits that the Ostrava building used to be a detention facility in the past. However, according to him, it has turned into a humanitarian center, where people can move freely and have an entertainment program. However, not all Roma refugees want to stay here, and some leave after one or two days.

“Common Ukrainians also come there. For them, there is always better housing, or sleeping in the gym as an alternative,” Miko added. “I do not know why the Roma have been there for so long.”

“We were accepted very well, but then we noticed that when the ethnic Ukrainians arrived they were given all the necessary documents on the spot and received support. While we have been in the Czech Republic for a week and do not have these tasks done,” a Romani refugee described her experience.

The locals began to oppose the influx of Roma refugees. Complaints about the behavior of refugees now come from locals both from inside the center and its surrounding area. The Romanies allegedly make a mess and do not have fundamental personal hygiene habits. In addition, they are not polite to the facility staff. These workers only appear in media anonymously, afraid of losing their jobs.

“Initially, we also gave food to Ukrainian refugees for free, but it is terrible with the Roma. They stop people outside the shop, go begging in the houses, the people are already disgusted by that,” revealed the saleswoman from the local shop.

She also complained that Roma refugees steal from the store, even though she has not yet called the police. According to the saleswoman, Roma children put sweets in their pockets, and the employees cannot look after all of them.

Last week, the mayor of the village, therefore, contacted the Administration of Refugee Facilities and also the Interior Minister Vít Rakušan. The mentioned administration allegedly knows about the issue and is working on its solution. Rakušan denied the interpretation that there would be a problematic selection of anyone.

“Vyšní Lhoty has been a crucial capacity for thousands of Ukrainian refugees since the beginning of the migration crisis. The advantage of this facility is not only a large capacity, but mainly experienced staff working with foreigners and social workers for a long time. The presence of representatives of the non-profit sector and links to other necessary institutions is also ensured,” the minister responded.

“We are aware that there are groups of particularly vulnerable people who need a special approach. Therefore, even based on a meeting with non-governmental organizations and a representative of the Inter-ministerial Commission for Roma Community Affairs, the government approved material that will ensure sufficient accommodation space in other regions in cooperation with the non-profit sector,” Rakušan added.