German parliament approves heavy weaponry to be sent to Ukraine 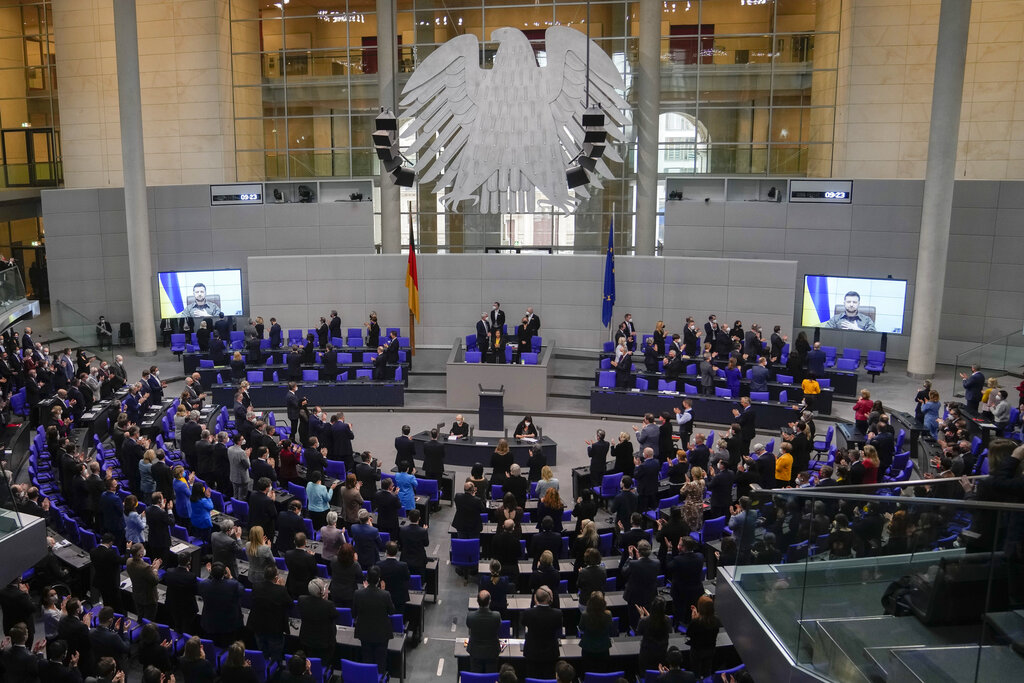 Members of the German parliament Bundestag give Ukraine President Volodymyr Zelenskyy a standing ovation after he speaks in a virtual address to the parliament at the Reichstag Building in Berlin, Germany, Thursday, March 17, 2022. (AP Photo/Markus Schreiber)

The ruling parties — the Social Democrats (SPD), the Greens, Liberals (FDP) — and the largest opposition force, the CDU/CSU center-right coalition, all voted for the resolution.

The Bundestag strongly condemned Russia’s brutal offensive war against Ukraine, in which it ruled that Russia had grossly violated international and humanitarian law and had sought to permanently disrupt the European peace order.

It also stated that the “aggressive nationalism and imperialism that manifested itself in the war against Ukraine has no place in Europe and the world in the 21st century.”

German lawmakers advocated Ukraine’s right to self-defense and called on the federal government, among others, to continue and expedite, as far as possible, the supply of military defense equipment to Ukraine, including so-called heavy weaponry such as armored combat vehicles and air defense systems.

The Bundestag also called on the government to explore and make use of other possibilities for indirect support, known as circular exchanges. Such an exchange includes an agreement with the Slovenian government to replace the weapons, initially manufactured by the Soviet Union, it hands over to Ukraine with new weapons made in Germany.

The resolution, passed by a large majority of 586 votes in favor, 100 against and 7 abstentions, also stated that Germany should contribute to the training of Ukrainian soldiers, whether on German soil or in other NATO countries.

At the same time, the parliament said the government must support Kyiv’s efforts to reach a ceasefire agreement through direct negotiations with the Russian leadership. If the agreement succeeds, Germany, together with the United States, Canada and other countries, NATO and EU partners, must be ready to play an active role in ensuring compliance with the agreement, the decision added.