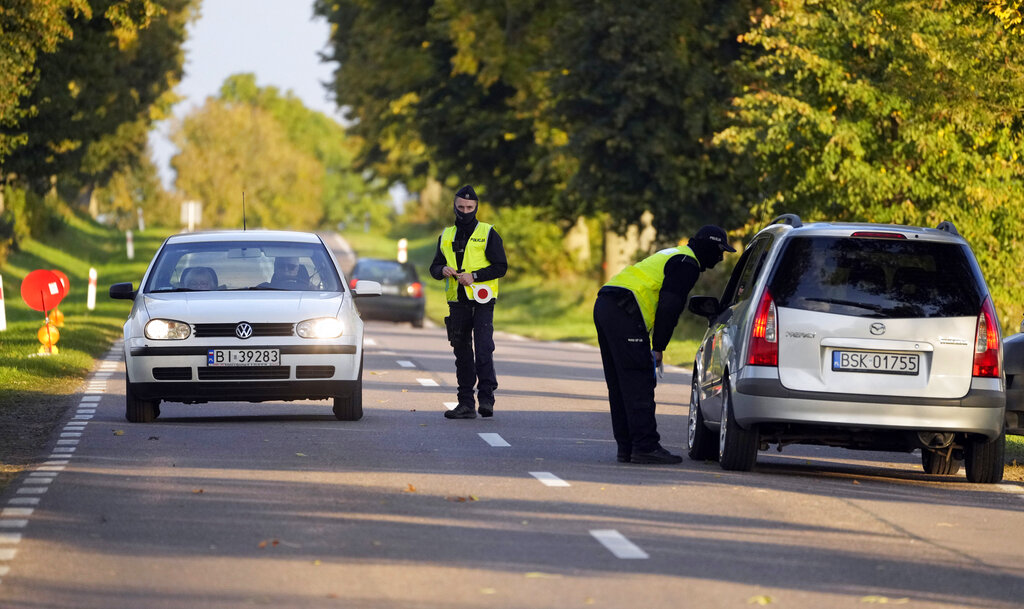 Polish police officers stop cars going in and out of an area along the border with Belarus, where a state of emergency is in place, in Krynki, Poland, Wednesday Sept. 29, 2021. European Union members Poland and Lithuania are struggling to cope with an unusually high number of migrants, most from Iraq and Afghanistan, arriving at their borders with Belarus in recent months. Poland has deployed troops and declared a state of emergency, and accuses Belarus of waging a "hybrid war" against the EU. (AP Photo/Czarek Sokolowski)

Hungary is in full support of Lithuanian and Polish efforts to stem illegal immigration, Justice Minister Judit Varga announced in a Facebook post on Wednesday.

“Like us, Lithuania has proven that when it comes to defending borders, only national solutions will succeed. Yet the European Commission insists on its New Migration Pact, which further encourages relocation,” Varga wrote.

“Hungary strongly supports Lithuania’s border protection efforts. That is manifested not only in words but also in deeds: we donated border barrier equipment to Vilnius that will help to more efficiently protect our common Schengen borders,” she continued. “Member states must provide adequate support to each other when common security is at stake.”

Varga said that while some member states do their utmost to stop illegal immigration, the EU’s higher offices are still unprepared for another migration crisis.

“Just like in 2015, we only have extraordinary meetings and ad hoc measures instead of implementing the already proven good practices,” she wrote. “Lithuania used the same tool as Hungary. They closed their borders – it works.”

Varga has long been critical of EU migration policy, but despite Hungary’s success in helping stop migratory flows, the country’s stance has made it a target of pro-migration politicians that dominate Brussels.

“The reform of EU migration policy is stalled and member states are left alone in fighting illegal migration, although it found a new route towards the Union. Therefore, we should focus on assisting member states to tackle migratory challenges in line with their own political priorities,” Varga said.

“Lithuania, just like Hungary, successfully protects the EU external borders and the safety of Europeans, and we should all be grateful to them.”