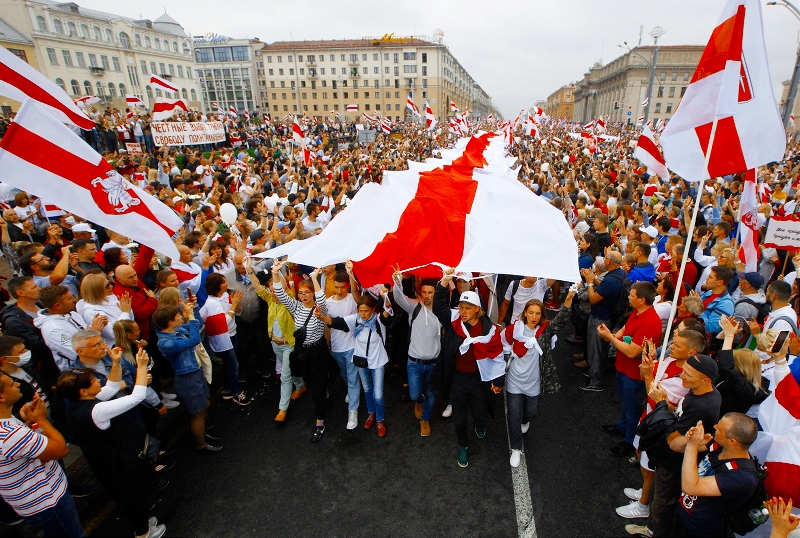 FILE - In this Aug. 23, 2020, file photo, demonstrators carry an opposition flag at a protest at Independence square in Minsk, Belarus. Political prisoners in Belarus are coming under increasing pressure following the recent arrest of activist Raman Pratasevich from a forcibly diverted Ryanair flight. Human rights groups say these prisoners have been marked with yellow tags sewn into their prison uniforms to single them out from regular prisoners. (AP Photo/File)
Belarus humanitarian visas Krystsina Tsimanouskaya Marcin Przydacz Protests News Poland

Poland has granted more than 12,000 humanitarian visas to Belarusians in a year’s time

Protests have been sweeping over Belarus since May 2020, even prior to presidential elections which were considered rigged by a clear majority of states and international organizations. These protests have been brutally suppressed by the Alexander Lukashenko regime, and thousands of protesters have been persecuted and arrested.

In face of the increasing repression of Belarusian society, several visa programs were created in Poland, and laws concerning humanitarian visas were changed. Persons in possession of such a visa have been allowed to legally work in Poland since December 2020. Such visas are given out for humanitarian reasons, due to state interest or international obligations.

In comparison, in all of 2019 prior to the start of the Belarusian protests, Polish institutions granted 358,421 visas, only 7 of which were humanitarian.

One of the most notable recent recipients of a humanitarian visa was Belarusian Olympic athlete Krystsina Tsimanouskaya, who was removed from participating in the Olympics following her criticisms of the Belarusian coaching staff. Belarusian officers tried to force her to return to Belarus.

Deputy FM Marcin Przydacz spoke about the scale of Belarusian migration to Poland and emphasized the difficulty of the situation. Many Polish consuls were kicked out of Belarus based on Lukashenko’s decision, and Belarusian authorities are trying to prevent citizens from leaving.

Przydacz explained that since Law and Justice (PiS) came to power in 2015, the government has liberalized its policy concerning Belarusians. “We have wanted the largest number of Belarusians possible to come to Poland for at least some time, be it for tourism or shopping purposes,” Przydacz said, adding, “This has also positively influenced interpersonal relations between Poles and Belarusians. It also created a positive change in the mentality of Belarusians. They have seen a true picture of Poland and Poles and how our country is developing and what it means to live in a democracy.”

He underscored that while migration to Poland from Belarus was high prior to the crisis, interest in coming to Poland continues to rise, as many people feel uncertain for both political and economic reasons.

“The economic crisis caused by Alexander Lukashenko through his Soviet-style management makes it so that an increasingly large number of young Belarusians want to come to Poland,” Przydacz emphasized.

An example of this large-scale migration is the Poland Business Harbor program. As part of it, over 14,000 Belarusian IT specialists and their families have moved their companies to Poland or have become employed by Polish companies.

Title image: In this Aug. 23, 2020, file photo, demonstrators carry an opposition flag at a protest at Independence Square in Minsk, Belarus. (AP Images) 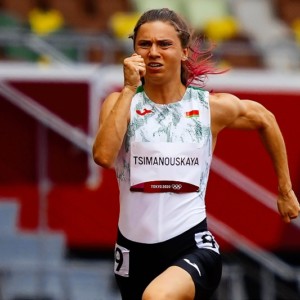